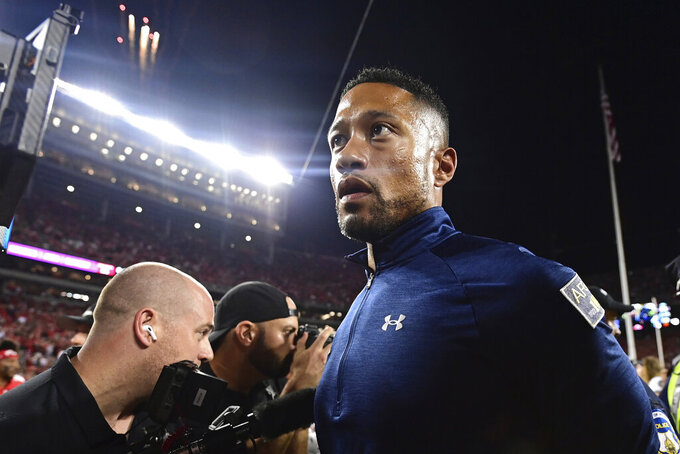 Line: Notre Dame by 20½, according to FanDuel Sportsbook.

Notre Dame coach Marcus Freeman is 0-2 since taking over the program last December. Though both losses came against top-10 teams, he needs a strong showing in his home debut against a Group of Five program. Marshall is playing the second of three nonconference games to open the season before traveling to Troy on Sept. 24. If the Thundering Herd are competitive, it would show they're ready to compete for a Sun Belt title in the inaugural season in the conference.

Marshall: RB Ethan Payne led the team with 110 yards and two touchdowns against Norfolk State. Payne will give Marshall a chance — if he can help replicate Ohio State’s 172-yard game last week against the Fighting Irish.

Notre Dame: TE Michael Mayer was a second-team preseason All-American. His 71 catches for 840 yards and seven touchdowns in 2021 set records for a Notre Dame tight end. He led the team in receptions against Ohio State with five for 32 yards. QB Tyler Buchner needs Mayer — and a host of other receivers — to step forward after the Irish scored just 10 points last week.

Saturday will be the first matchup between the programs. ... In his first career start, Buchner averaged 17.7 yards per completion and entered this week ranked No. 12 nationally in that category. ... Marshall’s average of 380 yards rushing per game ranks second in the Football Bowl Subdivision. ... The Thundering Herd are playing without RB Rasheen Ali, who rushed for 1,401 yards and 23 touchdowns in 2021. Second-year coach Charlie Huff announced in mid-August that last season’s top freshman rusher left the team to deal with an undisclosed issue.