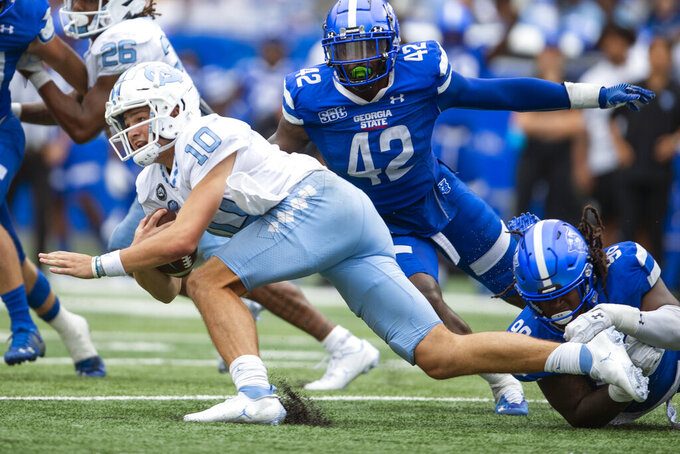 Line: North Carolina by 1 1/2, according to FanDuel Sportsbook.

North Carolina can improve to 4-0 for the first time since 1997, when Mack Brown was closing his first stint with the program. The Tar Heels have one of the nation's top offenses and worst defenses entering the latest matchup of a series where they've rarely had success. The Fighting Irish are coming off the first win for coach Marcus Freeman by beating California after an 0-2 start. They started the year at No. 5 in the AP Top 25 poll.

Notre Dame's defense against North Carolina's offense. The Fighting Irish have held three opponents to 21.3 points and 351.7 yards per game. That unit will face a stiff test from the Tar Heels, who have opened the season in a high-scoring sprint. The Tar Heels are fourth in Bowl Subdivision ranks in scoring offense (51.3) and fifth in total offense (547.3 yards) behind second-year passer Drake Maye.

Notre Dame: QB Drew Pyne. The third-year passer threw for 150 yards and two touchdowns in the California win in his first career start. He took over when Tyler Buchner went down with a season-ending shoulder injury in the Marshall loss on Sept. 10.

UNC: WR Josh Downs. Downs was one of the nation's top receivers last year and had two touchdowns in the season-opening win against Florida A&M, but he has missed the past two games due to injury. He is practicing and could return against the Irish.