Oh and 14: Colorado looks to snap losing streak against USC 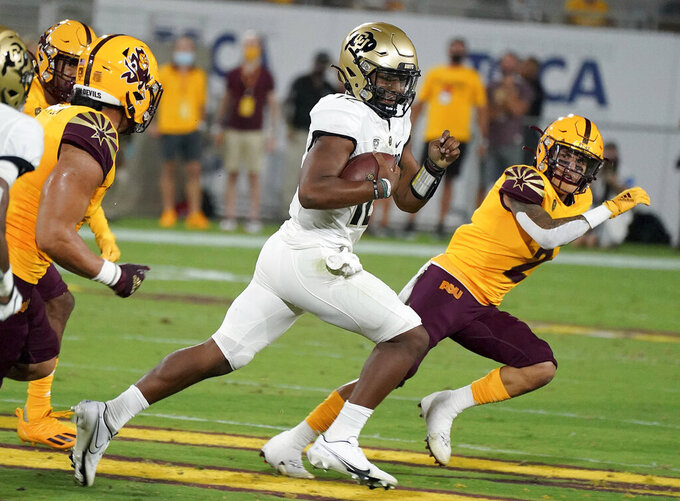 Colorado State quarterback Brendon Lewis (12) runs for a first down against Arizona State's defensive during the first half of an NCAA college football game Saturday, Sept 25, 2021, in Tempe, Ariz. (AP Photo/Darryl Webb)

Then again, the Trojans hadn’t lost to Oregon State in Los Angeles since 1960 — until last weekend.

Nothing’s easy for the Trojans these days.

Southern Cal (2-2, 1-2 Pac-12) looks at Saturday’s game at Folsom Field as a chance to get back on track. The Buffaloes (1-3, 0-1) view at it as an opportunity to finally break that long losing streak against USC.

Colorado’s issues center on an offense that just can’t generate much at the moment. The Buffaloes are averaging only 13.8 points, which is tied for 127th in the nation.

A common issue for both: Frustrated fan bases.

“I get it,” said Dorrell, who’s in his second season at Colorado and coming off an inaugural year in which he led the team to a bowl game. “I don’t want our fan base to get disappointed to the fact they think that our players are numb to the process. Believe me, they want everybody to be excited about who they are and what they’re doing.

The Buffaloes enter the game a 7 1/2-point underdog, according to FanDuel Sportsbook. They’re 0-7 at home against the Trojans, including a 2019 game in which QB Kedon Slovis helped the Trojans rally from a 10-point fourth quarter deficit for a 35-31 win. Slovis had 406 yards and four TDs on that chilly night.

“It’s just another form of adversity,” Slovis said. “We’ve seen lots of forms here since my time here. It’s just something that you have to use adversity and do your best to get past it.”

The Buffaloes are trying to get more consistent play from QB Brendon Lewis, who has thrown one TD pass, one interception and been sacked 10 times.

Part of the process for a young player.

“We’re scrutinizing every single detail you can imagine of developing his progression, week after week, so we’re not letting any bad habits enter into the equation,” Dorrell said. “We’re trying to eliminate the bad and to build on the things that are required for him to be successful.”

Trojans receiver K.D. Nixon played four years with Colorado — even catching a pair of TD passes against the Trojans in '19 — before transferring. He has two catches for 19 yards for USC and has also returned two punts for 14 yards.

Nixon missed a bulk of last season in Boulder due to a hamstring injury.

“Even though I only had him for a short period of time, I know that he had some strong leadership qualities,” Dorrell said.

This will also be a return for Trojans athletic director Mike Bohn, who served as A.D. at Colorado as well.

Former Colorado standout receiver Michael Westbrook will be honored between the first and second quarters in recognition of his induction into the College Football Hall of Fame.

Westbrook was involved in an iconic play in 1994, when he caught Kordell Stewart’s 64-yard TD pass during the “Miracle at Michigan." His catch as time expired sent the Buffaloes to a 27-26 win at Michigan.

Colorado’s defensive line has a familiar face returning in Mustafa Johnson. He regained his eligibility after going through a process with the NCAA after he wasn't selected in the 2021 NFL draft.

“I hope I can be an impact player again and do something that will help this team win in whatever facet of the game," Johnson said. “Most definitely, this is a second chance opportunity that many people do not get, so I need to make the best of it."