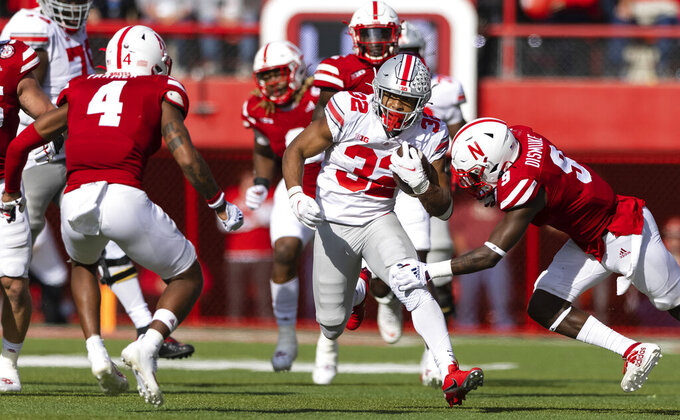 No. 3 Oregon, No. 4 Ohio State and No. 5 Cincinnati all moved up one spot behind No. 1 Georgia and No. 2 Alabama in the second College Football Playoff rankings, which were released Tuesday night.

Two Southeastern Conference teams sat atop the ranking for a second straight week, but after Michigan State lost last weekend, at least one spot in the top four was certain to change.

The CFP selection committee simply bumped up the Ducks, Buckeyes and Bearcats and dropped Michigan State to No. 7 behind No. 6 Michigan.

The Spartans beat the Wolverines 37-33 just two weeks ago, but the head-to-head result didn't carry the debate with the committee.

“The Michigan-Michigan State discussion started last week," Barta said. "The committee went back and forth. Michigan, statistically, is probably a more complete team.”

For the second straight week, Cincinnati set a new mark for best ranking for a team outside the Power Five conferences. The Bearcats were sixth in the first rankings.

Unbeaten Oklahoma remained at No. 8 and Notre Dame and Oklahoma State rounded out the top 10.

There are three more regular-season rankings before the CFP selection committee sets the semifinal matchups and other New Year's Six bowls with its final Top 25 on Dec. 5.

The College Football Playoff semifinals will be played at the Orange Bowl and Cotton Bowl on Dec. 31.

The national championship game is scheduled for Jan. 10 in Indianapolis.

The Sooners and the Big 12 have quite a bit of ground to make up, but will have plenty of fuel left on the schedule to get a boost.

Oklahoma's next three are against Baylor, the committee's No. 13 team, Iowa State (unranked but 6-3), and Oklahoma State. The Cowboys have already split games with Baylor and Iowa State.

“The committee noted, as probably anybody who has been watching Oklahoma, the quarterback change to Caleb Williams has changed that team,” Barta said.

The freshman Williams took over for Spencer Rattler four games ago an Oklahoma's offense has taken off since.

No unbeaten Power Five conference champion has ever been left out of the playoff and it is doubtful the Sooners would be the first.

Though it should be noted that in both those season, Oklahoma had already lost a game at this point.

So far Notre Dame's impact on the rankings has mostly been felt in how beating the Fighting Irish (8-1) has boosted Cincinnati.

Don't count the Irish out yet.

Assuming they win out, and they will be favored on all of their remaining games (at Virginia, vs. Georgia Tech, at Stanford), the Irish at 11-1 could become an interesting team if the Big Ten and Big 12 teams cannibalize each other and Georgia clears out the rest of the SEC.