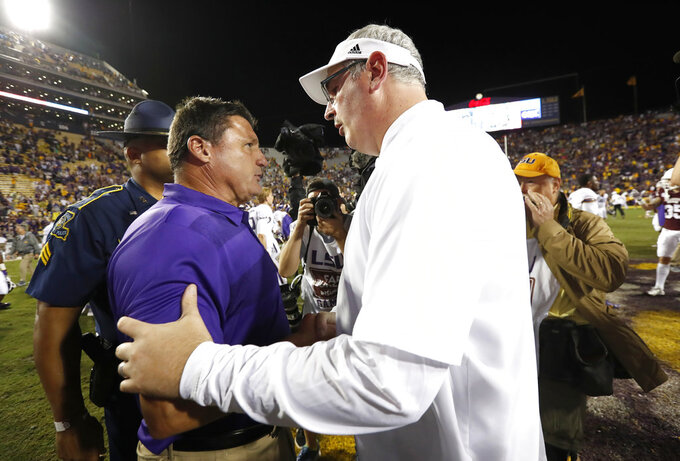 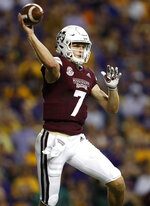 Mississippi State coach Joe Moorhead has been concerned about the team's lack of balance and run-heavy approach.

It didn't take long against fifth-ranked LSU to see why.

The Bulldogs suffered through an ugly 19-3 loss to LSU on Saturday and looked particularly pathetic when they tried to pass the ball. Senior quarterback Nick Fitzgerald had one of the worst games of his career, completing just 8 of 24 passes for 59 yards and four interceptions.

It's the second time in four league games that Mississippi State (4-3, 1-3 SEC) has failed to find the end zone.

"We took a step backward offensively," Moorhead said. "We moved the ball well on the ground for the most part, but lacked any semblance of consistency or effectiveness in the passing game. Certainly we can't turn the ball over four times, convert just 2 of 14 third-down opportunities and expect to win."

Fitzgerald's brutal game against LSU continued a season-long trend of poor passing. The three-year starter has regressed in his final college season, completing just 47 percent of his passes for 768 yards, four touchdowns and seven interceptions.

That's largely because the 6-foot-5, 230-pound Fitzgerald remains a very effective runner. He's fifth in the SEC with 644 yards rushing and has scored seven touchdowns. Against LSU, he had 23 carries for 131 yards.

"For the struggles Nick has had throwing the football, I kind of have to credit him with the amount of times that he's rushed the ball and what he's done for us to create yards and points," Moorhead said.

The first-year Mississippi State coach suggested that while Fitzgerald deserved responsibility for some of the passing game problems, there were also issues with the receivers and along the offensive line.

"We need to find a way to create more explosive plays," Moorhead said. "It's just difficult - unless you're a triple-option offense - to call runs the entire way down the field and expect to sustain that level of effectiveness throughout the course of a game.

"We've got to find a way to pass the ball better."

Moorhead said that despite the problems, Mississippi State can't become "myopic" with five games left on the schedule. The Bulldogs host No. 16 Texas A&M (5-2, 3-1) on Saturday and the Aggies' only two losses have been against No. 1 Alabama and No. 2 Clemson.

Mississippi State's defense continues to be among the nation's elite, allowing just 13.6 points per game and giving the Bulldogs a chance to win every game.

If the offense can make even a marginal improvement, there's reason to believe Mississippi State could close the season with success. For that to happen, the Bulldogs have to be a threat in the deep passing game.

Moorhead doesn't appear to be giving up on those throws, or Fitzgerald's ability to make them, any time soon.

"A couple of them were wide open (against LSU) and we just didn't him them," Moorhead said. "Those are ones we have to hit for this offense to look like it's supposed to."