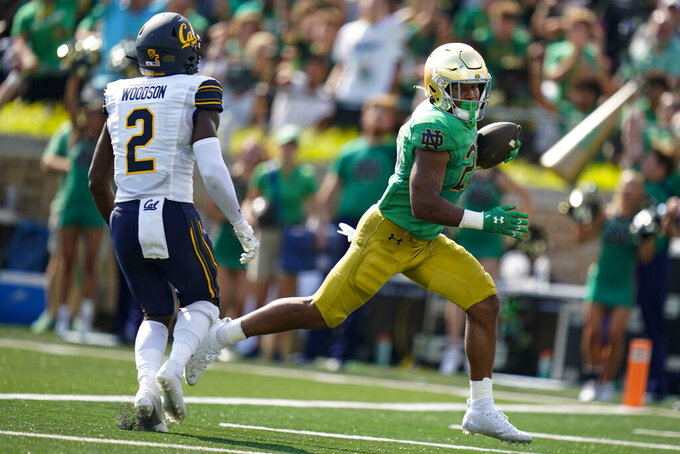 Notre Dame running back Chris Tyree runs in for a touchdown in front of California safety Craig Woodson (2) during the first half of an NCAA college football game in South Bend, Ind., Saturday, Sept. 17, 2022. (AP Photo/Michael Conroy)

Drew Pyne passed for two touchdowns and 150 yards in his first career start and Notre Dame overcame numerous mistakes to hold on to beat California 24-17 Saturday.

Freeman was asked what was going through his mind when two potentially game-clinching turnovers were overturned, one on a targeting penalty and another when Cal quarterback Jack Plummer was ruled down before he fumbled.

The way the Irish have played this season has a lot of Irish fans praying and talking to themselves.

The Irish (1-2) outscored Cal (2-1) 10-0 in the fourth quarter to avoid becoming just the third Notre Dame squad to start a season 0-3. The Irish, who started the season ranked No. 5, had blown leads three times, made sure there was no second-half letdown this time.

It wasn’t over until the last play as officials overturned two plays that appeared to be game-clinching turnovers for the Irish, giving the Bears a last-second shot. On fourth-and-13 from the Notre Dame 35, Cal’s Jack Plummer threw the ball into the end zone. The ball bounced off several players and Bears receiver Jeremiah Hunter nearly pulled it in, but the ball landed on the grass.

It was a familiar feeling for the Bears, who had five losses by seven points or less last season.

“It’s gut-wrenching. We had chances to win. Too many errors. One or two more plays,” Cal coach Justin Wilcox said.

“They almost gave me a heart attack out there, man,” he said. “It's really exciting football to watch, especially when it goes down to the wire like that. That's going to be a moment we'll never forget.”

Defensive lineman Jacob Lacey, who finished with five tackles and two sacks, said the Irish defense was focused on finishing in the fourth quarter.

“It’s everything we work for. It’s one of our keys to victory, finishing in the fourth quarter. We talk about it every week. We fell short a couple of times, but now we’re on the right track.”

The Irish opened a 24-17 lead with 9:16 remaining on a 6-yard pass from Pyne to Michael Mayer, just Mayer’s second catch of the day. The touchdown was set up when Pyne threw a short pass to tailback Audric Esitime, and he sprinted for a 36-yard gain before tripping at the 6-yard line.

The Bears drove to the Notre Dame 22 midway through the fourth quarter but couldn’t get any closer. Plummer threw three straight incompletions, then was sacked by Isaiah Foskey for a 10-yard loss with 6:30 left.

Cal got the ball again on their own 7-yard line, but on third-and-10 Jack Plummer was sacked for a 5-yard loss. It looked as though Notre Dame had put the game away when cornerback Clarence Lewis picked off a pass from Plummer, but the Bears got one more chance when J.D. Bertrand was called for targeting.

Pyne, playing because Tyler Buchner sustained a season-ending shoulder injury last week, was 17-of-23 passing. In addition to the scoring pass to Mayer, Pyne threw a 21-yard TD pass to Tyree. Tyree, who had only 12 touches through the first two games, rushed for 64 yards on 17 carries and had five catches for 44 yards. Estime added a 1-yard run and 76 yards rushing on 18 carries

Pyne struggled some early on. His first pass to Tyree was short, and he overthrew several receivers and had receivers drop some passes. A snap struck Pyne in the facemask, but he recovered and handed off to Estime for a 7-yard gain. On another play, he was signaling for a back to move when the ball was snapped.

Freeman said he'd take a moment to savor the win.

“If you don't take a minute to enjoy these things, you're going to regret it," he said. “That's what I keep reminding myself is enjoy the victory.”

GOING FOR THE WIN

Plummer said the Bears would have gone for two-points and the win if the last pass had been caught.

"If we scored there we were going for two, trying to get out of there,” he said.

Irish fans booed Notre Dame twice late in the second quarter when the mistakes were piling up. A loud cheer of “California!” could be heard, marking the second straight week the visitors got a loud chant going.

Cal: Plummer, a transfer from Purdue who lost his starter’s job with the Boilermakers last season following a 27-13 loss to Notre Dame, showed the Bears he can make big plays, but not quite enough for the upset.

Notre Dame: The Irish need to cutdown on mistakes if they're going to be competitive. Receiver Braden Lenzy had a false start on third-and-1, leading to Pyne being sacked on the next play. Right tackle Blake Fisher also was called for a false start on third-and-3. Late in the second quarter, when the Irish drove into Cal territory, linemen Jarrett Patterson and Zeke Correll were called for false starts on back-to-back plays to stall out the drive.

Cal: The Bears open the Pac-12 season on Saturday at home against Arizona.

Notre Dame: The Irish play at North Carolina on Saturday.