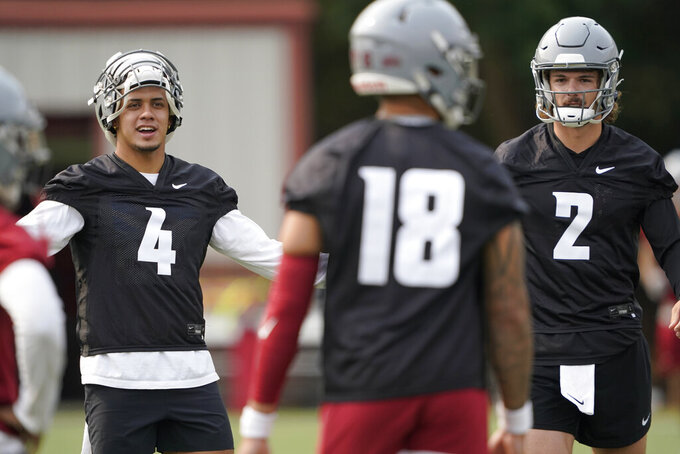 FILE - Washington State quarterbacks Jayden de Laura (4), Cammon Cooper (2), and Jarrett Guarantano (18) stand together on the first day of NCAA college football practice in Pullman, Wash., in this Friday, Aug. 6, 2021, file photo. WSU head coach Nick Rolovich would like for attention going into the 2021 season to be focused on players on the field, but he is getting just as much attention around his decision not to receive a COVID-19 vaccination.(AP Photo/Ted S. Warren, File)

Washington State is on the cusp of beginning the season with the first quarterback to take a snap for the Cougars remaining an unknown.

Utah State may be following a similar plan.

Washington State coach Nick Rolovich said he had not yet selected a starter and may not announce in advance whether Jayden de Laura or Tennessee graduate transfer Jarrett Guarantano will lead his run-and-shoot offense when the Cougars host the Aggies on Saturday night.

De Laura started four games as a freshman last year for the Cougars, throwing for 886 yards and five touchdowns. Guarantano was a starter at Tennessee before losing his job last season, but he had 32 career starts and threw 38 touchdowns for the Volunteers.

“I don't know that we will announce anything,” Rolovich said “There has been strong development by both guys. ... I guess one guy has got to take the first snap."

The Cougars aren't alone with the quarterback uncertainty.

It's a similar story at Utah State, where new coach Blake Anderson is trying to decide between junior Logan Bonner, who followed the coach from Arkansas State, or Andrew Peasley.

“We are still in a quarterback competition,” Anderson said. “Both have done phenomenal jobs.”

Bonner has recovered fully from a broken bone in his foot, Anderson said, while Peasley “had a phenomenal spring and summer.”

“We want to make the right choice,” Anderson said. “There's a real chance both will play.”

Rolovich was hired from Hawaii two years ago and led Washington State to a 1-3 record in the Pac-12 in a 2020 season abbreviated by the COVID-19 pandemic.

Utah State was just 1-5 last season, which prompted the firing of Gary Andersen and the hiring of Blake Anderson, who led Arkansas State to six straight bowl games.

The game Saturday will be the first time the Cougars will play in front of fans at home since late in the 2019 season. All of Washington State's games last season were without crowds.

Rolovich courted controversy by initially refusing to get vaccinated against COVID-19. But he said in mid-August that he intended to follow a new state mandate requiring vaccinations for everyone employed by the state’s colleges and universities. He has not indicated since whether he got a shot. Rolovich declined to address the issue this week. “We've been dealing with that enough," he said. “Lets move on with football stuff today.”

The Aggies are 0-12 on the road against Power Five opponents in the past decade. Utah State is facing a Pac-12 opponent for the first time since 2016, when it lost at USC. The last time Utah State defeated a Pac-12 team was in 2012 at home against Utah (27-20 OT). Utah State's last road win over a power conference team was against Kansas State in 1971.

Washington State will count on Borghi, Deon McIntosh and Nakia Watson, a transfer from Wisconsin, to run the ball this year. Rolovich declined to say how the carries would be divided. “I would expect to see multiple running backs in the game,” he said. Last season, McIntosh rushed for a career-high 147 yards in the win at Oregon State, the most by a Cougar since Dwight Tardy’s 214 yards against UCLA in 2007.