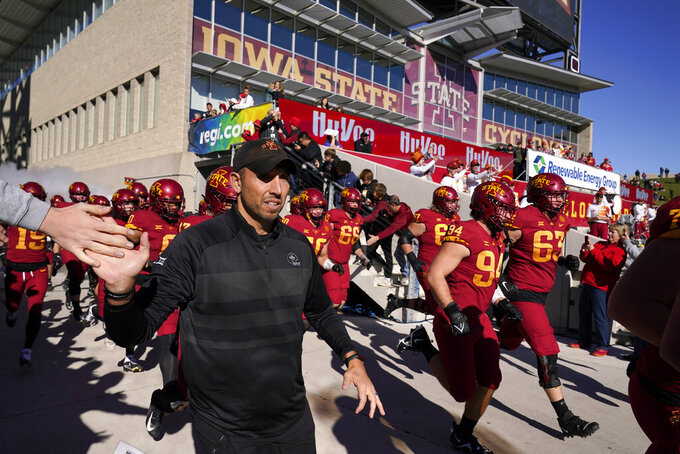 Iowa State head coach Matt Campbell runs onto the field before an NCAA college football game against West Virginia, Saturday, Nov. 5, 2022, in Ames, Iowa. College athletic programs of all sizes are reacting to inflation the same way as everyone else. They're looking for ways to save. Travel and food are the primary areas with increased costs. (AP Photo/Charlie Neibergall)

College athletic programs are reacting to soaring inflation the same way as everyone else — they’re looking for ways big and small to save money.

In the Power Five, home of college sports' biggest budgets and most considerable resources, schools are working with boosters and other partners to try to bridge the financial gap. Working down the line to smaller institutions, where budgets and resources are smaller, creativity is a must.

For schools of all sizes, travel and food are the most challenging issues.

Nebraska, with 24 sports programs and an athletic budget of $168 million this year, hopes to work with its beef and chicken vendors to find more cost-effective ways to order food for the training table. It’s also lining up more nonprofit groups to work concession stands to reduce labor costs.

The school expects the cost of doing business to be about $3 million more than it would be if the U.S. inflation rate hadn’t risen to more than 8%.

Arizona, which has a $101.6 million budget and 21 sports, projects costs could increase by $4 million, according to Derek van der Merwe, an assistant vice president and chief operating officer for administration and athletics at the Pac-12 school.

“You have to work real closely with all your teams to take a look at what changes you can make to absorb that cost within your operating budgets, or you have to look at other opportunities to increase revenues to offset those costs,” van der Merwe said. “The post-pandemic economy and insecurity is around a lot of the budgets we have to manage and makes it challenging because we don’t know what to anticipate.”

Those Power Five schools, though, have deep-pocketed boosters they can often rely on in times of need, an insurance policy for budgetary concerns.

At Mary Baldwin University, a private school with about 1,000 undergraduate students in Staunton, Virginia, it’s a far different story. The school competes in Division III in the USA South Athletic Conference, and most of its members are in North Carolina, anywhere from 3½ to 6 hours away.

Besides the cost of travel, there are overnight stays and food expenses.

The Fighting Squirrels do not field a football team, having only started admitting men in 2017, but added baseball and men’s basketball last year. The new programs began just as the athletic budget, cut 20% during the pandemic, was restored to its previous level before those additions, athletic director Tom Byrnes said.

“So we’re doing things here on a shoestring,” he told The Associated Press. “And we’re getting it done, you know, as best we can. But inflation is not helping us.”

The school is banking on its creativity and some local generosity.

Men’s basketball, 8-13 in its inaugural season, will play exhibitions against two Division I programs, rather than a couple scrimmages that might be more helpful for player development, hoping to bring in $3,000-$4,000 for each to pay for the team’s basketball shoes.

“Baseball, softball and women’s basketball teams all work in concession stands or as ushers at James Madison football games,” Byrnes said, traveling in a bus provided by a local company at cost. The school also is negotiating with a used car dealer to have it provide a car for coaches to use on recruiting trips for free, and has local restaurants that sometimes provide food at a discount.

“So those are the kind of things we have to do. We do nickel and dime stuff, too. The women’s soccer team has a Kona ice truck at games, so stuff like that," Byrnes said.

While unlikely to have to resort to such measures, the biggest schools are not immune to belt-tightening wherever possible. Coaches' requests for equipment are scrutinized, and they are sometimes asked to give up something in return.

But they all still have to travel, and eat.

Charter flights for the Hawkeyes will be 8.5% higher and charter bus costs are up 12%, associate athletic director and CFO Greg Davies told the AP.

The Nebraska training table will see food costs rise about 20% this year, from $3.2 million to $3.8 million. Nebraska athletes consume 2,200 pounds of beef each month, and Ewald said the athletic department hopes to work with vendors to find ways to get better deals for buying in greater bulk.

Arizona, like Nebraska, is trying to absorb the added costs due to inflation by tightening belts. One thing is not negotiable, van der Merwe said.

“Our philosophy is that we make sure the student-athlete experience is the priority for everything we budget and plan for,” he said, “and everything around that is curtailed in order to make sure we maintain the integrity of that priority.”

The philosophy is the same at Randolph-Macon College, another Division III school in Virginia. Athletic director Jeff Burns credits the school's athletic success for having allowed it to dip into reserves to maintain that standard.

“There’s really a spectrum across Division III. You’re going to see a lot of different ways where the haves are going to be able to handle it and the have nots are probably going to be forced to make some changes,” Burns said.

After more than three decades in sports, it’s not how Mary Baldwin's Byrnes imagined things. He took the job six months before the pandemic began.

“It’s challenging," he said. "But you know what? It keeps every day interesting.”