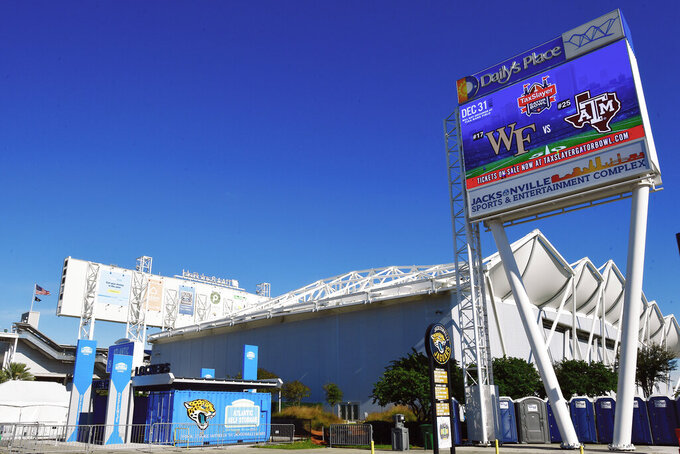 Signage for the Gator Bowl NCAA college football game is shown outside Daily's Place and TIAA Bank Field in Jacksonville, Fla., Wednesday Dec. 11, 2021. No. 23 Texas A&M won’t play in the Gator Bowl against Wake Forest on Dec. 31 because of COVID-19 issues and season-ending injuries. The 8-4 Aggies were scheduled to leave for Jacksonville on Sunday before announcing Wednesday that they wouldn’t be able to participate in the bowl game. (Bob Self/The Florida Times-Union via AP)/The Florida Times-Union via AP) 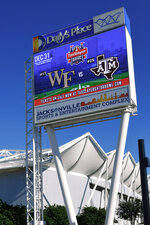 Rutgers will replace Texas A&M in the Gator Bowl against Wake Forest after an NCAA committee decided Thursday to adhere to an existing policy for making teams with 5-7 records bowl eligible.

The NCAA football oversight committee also announced that any bowl can be moved to as late as Jan. 10 if the schools involved need additional time to prepare for the game.

The Gator Bowl will keep its scheduled date and 11 a.m. EST kickoff on New Year's Eve, meaning Rutgers will have less than a week to get ready to play one of the highest-scoring teams in the country.

“Better late than never,” read a tweet from the Rutgers football account. “The Scarlet Knights are going BOWLING.”

Rutgers will be making its first bowl appearance since 2014, its first season as a member of the Big Ten Conference.

“This program has made great strides under the leadership of head coach Greg Schiano and what better way to showcase that than at the TaxSlayer Gator Bowl on New Year’s Eve,” Rutgers athletic director Pat Hobbs said in a statement. "It is an equally exciting time for our Rutgers fans to be part of this marquee game.”

Texas A&M pulled out of the Jacksonville, Florida, game on Wednesday because of a lack of available players. The Aggies were having issues with COVID-19, plus they already had been depleted by injuries, opt-outs and players transferring.

Later Thursday, the Hawaii Bowl became the first postseason game to be canceled this year. Hawaii pulled out of the game against Memphis, citing similar issues to Texas A&M, less than 24 hours before it was to be played.

NCAA rules allow teams with 5-7 records, such as Rutgers, to be bowl eligible if there are not enough six-win teams to fill all the spots. The 5-7 teams with the highest Academic Progress Rate scores have first crack at open slots. Rutgers is atop that list, though the NCAA did not release the full APR rankings to allow schools to privately decline a bowl bid.

“This is what the NCAA is about, in instances like this, let's reward those schools that do put academics first,” Hobbs said.

Having Rutgers replace Texas A&M on short notice was not a foregone conclusion for the oversight committee — even after Rutgers officials informed decision-makers on Wednesday that they believed the team could be reassembled quickly.

The Scarlet Knights have not played since losing to Maryland 40-16, two days after Thanksgiving. Schiano said the players trained for a week after the game in hopes of getting a bowl bid with a 5-7 record. The players also worked out the following week and had a voluntary week of training during final exams, so they are conditioned.

“Physically, if I didn't think we would be able to I wouldn't do it,” Schiano said, adding his team is fully vaccinated. He hopes there won't be COVID-19 issues when the players return to school.

Players are due back on Saturday night and they will get on the field Sunday to ramp up, Schiano said. He noted players who declared for the NFL Draft and signed with agents can seek a waiver from the NCAA if they want to play in the bowl game.

There was some concern among oversight committee members about the safety of having a team compete with so little time to prepare. At least some consideration was given to having a team that already has played a bowl face Wake Forest, or simply not filling the spot and having the game be canceled.

Ultimately, the committee chose to stick with an existing policy under unusual circumstances.

“The TaxSlayer Gator Bowl team has done an amazing job of pivoting in these circumstances,” bowl CEO Brian Rhodes said in a statement. “We wish the Aggies a speedy recovery, and we are looking forward to a great bowl game between Wake Forest and Rutgers.”

Gator Bowl president Greg McGarity said the SEC will not receive any benefits of the game because it did not play. He said the bowl is reworking its payout model. Usually, the participating teams receive about $5.3 million to share with its conference.

“Certainly we want to be fair to everyone,” McGarity said. "Everything is last minute. Our main thing is making sure these student-athletes and staff have a great time, and they certainly will. We'll deal with the dollars at some point in time.