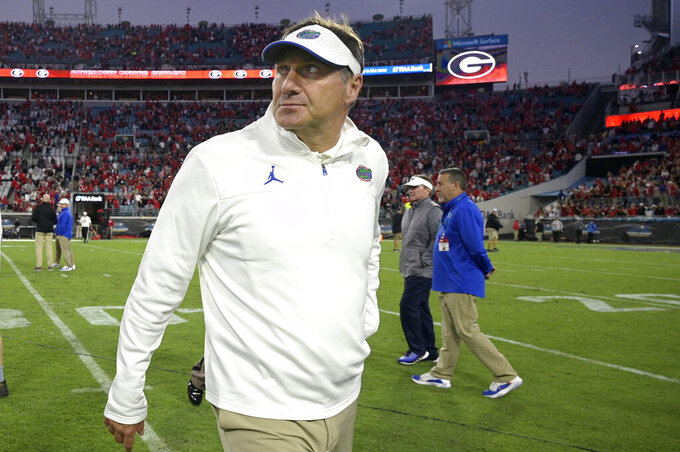 COLUMBIA, S.C. (AP) — Quarterback concerns and struggles in the Southeastern Conference are issues both Florida and South Carolina are familiar with this season.

It's been a disappointing season for the Gators and Gamecocks, though probably worse for Gators coach Dan Mullen given the preseason expectations.

“It's six inches from a pat on the back and a kick in the rear. In the SEC you’re either getting one or the other,” Mullen said. “There’s no in-between. There’s no, ‘I guess everything’s OK.’”

Things are far from OK for the Gators, who rose to No. 10 through four games before sliding out of the rankings after losing three of their last four.

Mullen has gone back and forth between quarterbacks Emory Jones and Anthony Richardson, both who've shown flashes of success along with struggles to move the ball at critical times.

Jones had started the first seven games with Richardson getting the call against Georgia. However, Richardson came out late in the Bulldogs loss. The freshman was diagnosed with a concussion and didn't practice Monday or Tuesday in preparation for the Gamecocks.

Still, Mullen has seen a confidence at practice he believes will fire up his team this week.

“I think their focus has been fantastic this week and I think part of the preparation is building all of that confidence within each other and expecting great things to happen,” he said.

South Carolina, too, is uncertain at quarterback as it looks to get closer to the postseason in coach Shane Beamer's first season.

Luke Doty, the expected starter this season, had season-ending surgery on his injured foot last week while Zeb Noland, the grad assistant turned quarterback, had an operation to fix a meniscus problem in his right knee during the Gamecocks time off last week.

Beamer joked with the team pilot on a recruiting trip that it's not “a good thing when your starting quarterback and your backup quarterback have both been on that plane earlier that week going somewhere to get surgeries.”

Noland has practiced this week, although Beamer said Noland would have to show more than he had early on to face the Gators. If Noland can't go, St. Francis of Pennsylvania transfer Jason Brown would make his first start.

Florida's NCAA record streak of 418 games in a row scoring points dating back to 1988 looked in danger for the first 57 minutes of its 34-7 loss to top-ranked Georgia. However, Jones led a 10-play, 87-yard TD drive that he ended with 7-yard scoring run.

South Carolina's Beamer and offensive coordinator Marcus Satterfield have faced questions on whether the plan of attack is too complex for the Gamecocks, who are last in SEC total yards and next-to-last in points per game.

Satterfield said they're just teaching “basic football.” If the players keep working at it, he added, “eventually, it will click.”

Florida's Mullen brushed off a question about recruiting early in the week and was skewered for it so much he had to clarify his stance come Wednesday. Mullen said at first he'd discuss recruiting after the season. Critics wondered if Mullen didn't put the necessary importance on recruiting as other top programs do. By mid-week, Mullen said his words were taken out of context and his staff never stops recruiting.

Should Jason Brown play at quarterback for the Gamecocks, he'll likely look for his good friend in tight end-receiver EJ Jenkins. Brown and Jenkins grew up together in Fredricksburg, Virginia, and have played on the same teams in middle school, high school, FCS St. Francis and now at South Carolina. Beamer jokes that no matter how many receivers are on the field, there's a “97 % chance” Brown's going to the 6-foot-7 Jenkins.

The Gators have had at least 350 yards of offense in its first eight games, something that last last occurred when the “Ol' Ball Coach” in Steve Spurrier was winning SEC titles and lighting up scoreboards. While Florida struggled to score, its 161 yards rushing vs. Georgia was the most against the Bulldogs in the past three seasons.