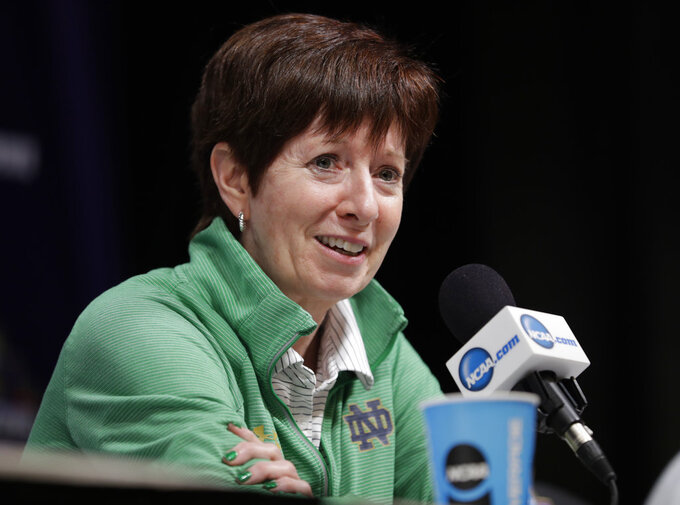 File-This March 31, 2018, file photo shows Notre Dame head coach Muffet McGraw responding to a question during a news conference for the women's NCAA Final Four college basketball tournament in Columbus, Ohio. College basketball season's starting earlier and earlier and that's something top coaches McGraw and Geno Auriemma aren't thrilled about it. A sport that used to begin practice around Oct. 15 and have its first games at Thanksgiving is now beginning nearly three weeks sooner. Tuesday, Nov. 6, 2018, will be the first day of games with nearly 100 women's contests scheduled and nearly 150 men's ones as well. (AP Photo/Tony Dejak, File)

NEW YORK (AP) — College basketball season begins Tuesday — the earliest it's ever started. Muffet McGraw and Geno Auriemma aren't thrilled about that, either.

A sport that used to start official practice around Oct. 15 and have its first games at Thanksgiving is now beginning nearly three weeks sooner. Add that to the summer and preseason workouts that are allowed, and it's nearly a year-round sport.

Tuesday will feature almost 100 women's games and 150 for the men.

"I think the season is way too long," said McGraw, the coach for defending women's national champion Notre Dame. "Basketball has more practice before its first game than any other sport."

With the Final Four taking place on April 5 and the title game on April 7, the season is nearly 200 days long.

"I don't like it. I don't like anything about it," said Auriemma, who has won 11 national titles as the women's coach at UConn. "I don't care what kind of players you have. I remember the days when you couldn't talk to your players about basketball until Oct. 15. We had some pretty good teams back then."

This year the NCAA moved up the start date a few days to Tuesday to try and create more buzz for the beginning of the season. It gets the opening night of games away from college and pro football, which dominates weekends in the fall.

"Saturday and Sunday is football in this country. It's college football on Saturday and the NFL on Sunday," NCAA vice president of men's basketball Dan Gavitt said. "You start the season Friday and basically they are dark for two days until you start up again on Monday. Starting on Tuesday, we can hopefully get a few days before you get to the weekend where people talk about the season."

The only flaw in that this year is the new start date falls on Election Day, which will dominate news cycles. Gavitt said the NCAA might look at that in the future.

The midweek start date does help alleviate a few scheduling conflicts for gyms, because volleyball is still going on and many schools use the same building for both sports.

With the new opening date, practice could officially start the last week of September — the NCAA allowed women's teams to begin 42 days before their first game. The men have had that in place since 2013. Teams are still only permitted to have 30 practices during that stretch, just as it's been since 2010. Until this season, schools were allowed 40 days to get those practices in.

"Our WBCA board voted against 42 going forward. We were all opposed," McGraw said. "The NCAA passed it anyway. The men are doing it and we have to have equality. We weren't in favor of moving the season up, either."

The NCAA also gave coaches more time with their players once school started. Teams are now allowed to use four hours a week for on-court basketball activities in the preseason — double what it previously had been.

Each school is different in how it uses those days. A young team with many new players or a new coach could benefit from the earlier start date. A team expecting to go deep into the NCAA Tournament might wait a little longer to start so as to avoid burnout when the games matter most.

Most coaches give their teams weekends off during September and October knowing that during the season they won't be able to do that.

McGraw started late with her top-ranked team knowing the ultimate goal was to play until early April. The Irish began on Oct. 4 and McGraw gave her players five days off for fall break.

Auriemma had his team start even later, with its first practice coming in the second week of October.

He also took it a step further. Auriemma decided after last season that Huskies coaches wouldn't schedule offseason workouts during the spring and summer anymore. It was up to the players. If they wanted to work out, they'd have to reach out to the coaches.

Auriemma thought that would bring back the joy of playing and the anticipation of practice. He figured it also would help develop the upperclassmen into leaders, making them organize the workouts and take more ownership.