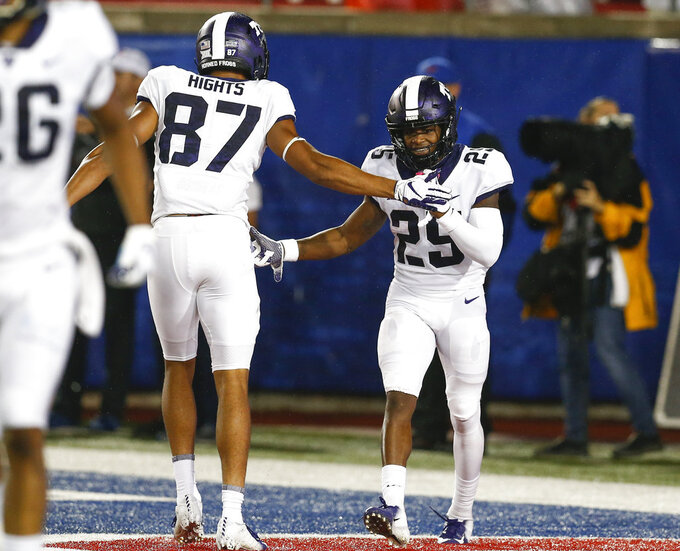 DALLAS (AP) — If No. 16 TCU was looking ahead to a showdown with Ohio State, KaVontae Turpin snapped his fellow Horned Frogs back into the present with another speedy dash to the end zone.
Turpin ignited a sluggish team by returning a punt 78 yards for a touchdown before adding a 42-yard scoring catch, and the Horned Frogs pulled away for a delayed and rain-soaked 42-12 victory over Dallas-Fort Worth rival SMU that ended early Saturday morning.
The start of the game Friday night between former Southwest Conference foes was held up nearly two hours by lightning, and a steady rain fell until halftime.
The Horned Frogs (2-0) finally secured their first seven-game winning streak in the 98-game Iron Skillet series after midnight, winning comfortably after struggling early for the third straight year. TCU has outscored SMU 83-14 in the second half the past three meetings.
Perhaps looking ahead to the fourth-ranked Buckeyes next week, TCU squandered its first two chances to take control by committing turnovers before Alec Dunham picked up a fumble by SMU quarterback Ben Hicks in stride and returned it 25 yards for a touchdown.
"We understand the next ballgame here Ohio State is not SMU," coach Gary Patterson said. "Not in any aspect whatsoever. But I think our kids will know that too."
The Mustangs (0-2) led 9-0 early in the first home game for coach Sonny Dykes, but had just 167 yards total offense after Braeden West's 51-yard scoring run on the fifth play of the game.
"I'm disappointed that we didn't play better in the second half," Dykes said. "We're just not very good at the details right now. That's what's biting us in the rear end."
Two plays before Dunham's score, Mustangs linebacker Shaine Hailey had an open field in front of him on Shawn Robinson's first career interception but was quickly dragged down by an alert Turpin.
The speedy receiver/returner pointed toward the punter looking for a block on TCU's first score, but easily ran past an unblocked Jamie Sackville anyway.
The sealing TD came when Turpin caught a short pass, ran through the middle of the secondary and split three defenders near the goal line. Turpin, who set school records with his fifth career special teams TD and fourth on a punt return, finished with 176 all-purpose yards.
SLOWER START
A week after throwing for three touchdowns and running for two scores in the first half of a 55-7 rout of Southern University, Robinson finally found the end zone on an 18-yard run in the third quarter. That gave TCU, a three-touchdown favorite, its first comfortable lead at 28-12.
CITY SLICKERS
The rainy first half had its zany moments. TCU punter Adam Nunez fumbled without getting touched while running after a bad snap, and the ball rolled out of bounds near the pylon for what was ruled a safety, giving SMU its 9-0 lead.
The Horned Frogs went ahead for the first time at 14-9 when receiver Jaelen Austin fell on the ball in the end zone after running back Sewo Olonilua had it knocked loose around the 10.
THE TAKEAWAY
TCU: On the short 40-mile trip from their Fort Worth campus, the Horned Frogs drove by AT&T Stadium, home of the Dallas Cowboys and site of their battle with the Buckeyes. There's little question the Horned Frogs were caught looking ahead, although the long delay probably was a factor as well in leading just 14-12 into the third quarter.
SMU: The Mustangs waited a long time for a bright spot with Dykes, who chose to coach in the Frisco Bowl last year after Chad Morris left for the Arkansas job. SMU fell behind 42-3 in the first half of that season finale and trailed 36-0 in the fourth quarter of last week's 46-23 opening loss to North Texas, another Dallas-area school. Hanging with a Big 12 title contender for a half gives the Mustangs some hope.
POLL IMPLICATIONS
The Horned Frogs aren't likely to move up much, and might be at risk of dropping a spot or two because of the early struggles against an overmatched opponent.
UP NEXT
TCU: The Horned Frogs can't get too caught up in the Ohio State game next Saturday because the Big 12 opener is a week later at Texas, their biggest rival.
SMU: At No. 21 Michigan next Saturday.
___
More AP college football: https://apnews.com/tag/Collegefootball and https://twitter.com/AP_Top25