USC welcomes back Reggie Bush after 10 years in NCAA exile 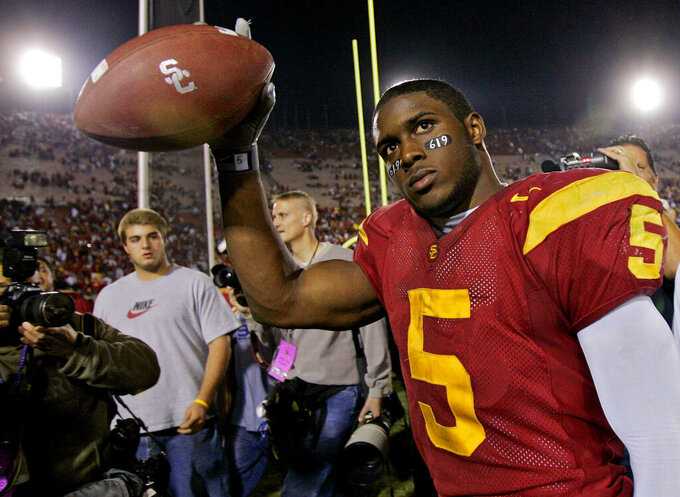 FILE - In this Nov. 19, 2005, file photo, Southern California tail back Reggie Bush walks off the field holding the game ball after the Trojans defeated Fresno State, 50-42, at the Los Angeles Coliseum. The former star running back had been prohibited from interacting in an official capacity with the school he played for from 2003-05 since NCAA sanctions handed down in 2010. Bush and USC were penalized for him and his family receiving impermissible benefits while he was still in school. USC President Carol Folt wrote in a letter to Bush on Wednesday, June 10, 2020, that he could now “be afforded the privileges and courtesies extended to all Trojan football alums.”(AP Photo/Kevork Djansezian, File)

Reggie Bush was the centerpiece of Southern California's last football dynasty. He inspired players to become Trojans and continued to be adored by USC fans while spending a decade in NCAA-mandated exile from the school.

USC welcomed back Bush on Wednesday, 10 years to the day the NCAA slammed the program with sanctions that included cutting off official ties to the only Heisman Trophy winner to have his victory vacated.

“I’ve dreamed of this day for 10-plus years, and I’m excited to come home!” Bush said in a statement.

Bush played running back at USC from 2003-05, helping the Trojans to a pair of national championships. Five years after he was gone, Bush and USC were penalized by the NCAA after an investigation determined he and his family received impermissible benefits while he was still in school.

USC President Carol Folt wrote in a letter to Bush that all restrictions had been officially removed and he could now “be afforded the privileges and courtesies extended to all Trojan football alums.”

The school also ended its disassociation with former basketball star O.J. Mayo, who was also sanctioned in 2010 for receiving impermissible benefits as part of the same broad investigation into USC athletics.

Bush's Trojans teams won national championships in 2003 and '04 and had a 34-game winning streak. He ran for 3,169 yards in three seasons, averaging 7.3 yards per carry, and scored 42 touchdowns.

He won the 2005 Heisman, with 1,740 yards rushing and an 8.7-yard average per carry. But the award was vacated because of the NCAA sanctions. He voluntarily returned the statue to the Heisman Trophy Trust before the organization had a chance to strip him of it. Bush is the only Heisman winner to not be recognized by the Heisman Trust.

“To say that I don’t want the Heisman back would be a lie," B ush said in an interview on “The Herd with Colin Cowherd” on FS1. “One hundred percent I want my Heisman Trophy back.”

Heisman spokesman Tim Henning said the trust was aware of USC's announcement regarding Bush but had no immediate comment.

The NCAA sanctions also led to USC being stripped of its 2004 BCS title, though The Associated Press still recognizes the Trojans as national champions for that season.

Bush remains one of the most popular players in USC history. No Trojans player has worn Bush's No. 5 since he left.

“He was the reason why a lot of players joined USC," said Rams receiver Robert Woods, who played for the Trojans from 2010-12. "He’s a part of the USC tradition. Greatest USC football player, in my opinion. He needs a statue, too.”

Bush was drafted second overall by the New Orleans Saints in 2006. He said on FS1 that even though he went on to a productive 11-year NFL career, the way things ended at USC burdened him.

The NCAA determined Bush received gifts and cash from a marketing agent who had hoped to represent him when he became a pro.

The sanctions against USC were some of the harshest the NCAA has handed down in the last 20 years — even compared to similar cases. The Trojans were banned from the postseason for two years and stripped of a total of 30 football scholarships over three seasons.

Athletic director Mike Bohn, who took the job last fall, said Bush was remorseful for what happened to the program, and that USC owed it to Bush to bring him back in the fold for all he had done for the school.

Initially, Bush was banned permanently from associating with USC, but a tweak made in 2017 by the NCAA's Committee on Infractions to its procedures reduced all previous lifetime disassociation penalties to 10 years.

Bush began working for Fox Sports last season as an analyst on its college football Big Noon studio show with former USC teammate Matt Leinart. He returned to the Los Angeles Coliseum for a Trojans game for the first time when the Fox show broadcast from inside the stadium before a Friday night contest between USC and Utah, won by the Trojans.

Bush was not acknowledged by the school during that game. His number has not been among those displayed in the coliseum end zone along with other USC Heisman winners such as Marcus Allen and O.J. Simpson. But Trojans fans celebrated Bush's return that night, wearing his No. 5 jersey and chanting “Reg-gie! Reg-gie!”

How and when Bush will be honored by USC has not been worked out yet, said Bohn.

“I know it will be a special day for me when he can walk on campus with his three kids, his wonderful wife and be a part of what's going on at USC,” Bohn said.