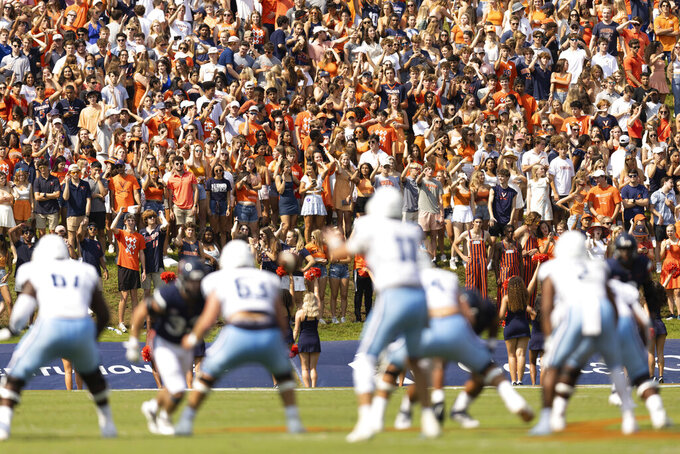 Virginia students cheer for their team during a game against Old Dominion in Charlottesville, Va., on Saturday, Sept. 17, 2022. (Mike Kropf/The Daily Progress via AP)

The Cavaliers (2-1), who saw Old Dominion go ahead 14-13 with 1:01 to play, drove 56 yards before Brennan Armstrong took a knee on the next-to-last play to set up the kick. Farrell, who kicked two other field goals but missed a 36-yard try earlier in the fourth quarter, split the uprights, throwing his arms in the air as his teammates ran onto the field and mobbed him in celebration.

Old Dominion (1-2) had gone ahead on Hayden Wolff's 18-yard pass to Zack Kuntz, quieting a small crowd at Scott Stadium. Wolff had several big completions in the 80-yard drive, including a 22-yarder to Kuntz on fourth-and-8 from his own 22. Virginia helped, too, with Anthony Johnson Jr. getting called for pass interference on a fourth-and-15 play from the Cavaliers' 33.

“You would have loved in that two minutes at the end of the game to get off the field,” Virginia defensive coordinator John Rudzinski said. "Some great learning moments and it’s always nice to have learning moments when it’s a win.”

Monarchs defensive back Tobias Harris returned the interference favor on Virginia's winning drive, getting called when Armstrong threw for Dontayvion Wicks in the back left corner of the end zone. That moved the ball to the 5.

The Cavaliers outgained Old Dominion 513-324, but twice fumbled the ball away inside the Monarchs' 5 yard-line, and another time to set up ODU's first points.

Mike Hollins ran for a touchdown for Virginia, but coughed the ball up at the 4 later in the first half. Armstrong lost the other two, once at the ODU 5 when he was hit from behind by Ryan Henry.

“He's dangerous when he's outside the pocket,” Monarchs safety R'Terriun Johnson said of Armstrong, who carried the ball 14 times. “He got a huge first down after that big completion and it hurt us.”

Wolff was 23-for-37 passing for 235 yards. His other touchdown came on a 29-yard pass to Ali Jennings with 19 second left in the first half.

Old Dominion: The Monarchs were bidding to take out their second Power Five opponent of the season, having beaten Virginia Tech in their opener.

Virginia: Tight end Grant Misch, who had seven career receptions in 37 games prior to Saturday, caught four passes for 33 yards.

The Monarchs return home to face Arkansas State next Saturday.

The Cavaliers go on the road to play at Syracuse on Friday night.