Warning for Washington, Auburn: Kickoff Game can be critical 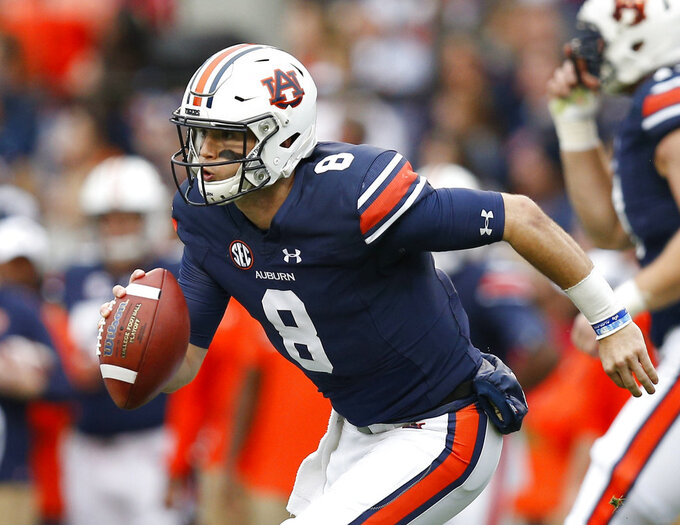 ATLANTA (AP) — One game does not make or break a season.
Especially the opener.
Then again, the Chick-fil-A Kickoff Game has often been an accurate predictor of where the season is headed for both teams.
Keep that in mind when No. 6 Washington faces No. 9 Auburn on Saturday.
The ramifications of this first-of-September contest might still be lingering come December.
"The fact that we are playing a really high-profile game brings a little bit more to the table on both sides from a national standpoint," Auburn coach Gus Malzahn said.
While Washington's Chris Petersen warned of placing too much importance on a single game — "We can't make it bigger than it is," the coach said — he is no doubt mindful that the outcome will likely have a huge impact how far the Huskies and the Tigers go this season.
The very first of these neutral-site games in Atlanta, played a decade ago, marked Alabama's return to national prominence under Nick Saban. The Crimson Tide romped to a 34-10 victory over Clemson , a result that also signaled the end of the Tommy Bowden era. The Tigers coach didn't even last out the season.
The following year, Alabama returned to Atlanta to open with a 34-24 victory over Virginia Tech, launching the first of five national titles with Saban at the helm. The Crimson Tide followed a similar past last season, starting with a dominating 24-7 victory over Florida State at Mercedes-Benz Stadium on the way to finishing No. 1.
It works the other way, too, as Bowden and others have discovered.
Auburn, for instance, opened the 2012 season with a 26-19 loss to Clemson and went on to finish 3-9, its worst season in 60 years and costing coach Gene Chizik his job. A year ago, Florida State lost its starting quarterback to a season-ending injury in the loss to the Tide, leading to a disappointing 7-6 campaign that ended with coach Jimbo Fisher bolting for Texas A&M .
"Are you trying to scare our guys or what?" Peterson said, perhaps only half-jokingly. "We're already nervous enough."
Both teams are looking to bounce back from disappointing finishes.
Auburn knocked off Georgia and Alabama to earn a spot in the Southeastern Conference championship game, only to lose to the Bulldogs in a rematch with a trip to the College Football Playoff on the line . Forced to settle for the Peach Bowl, the Tigers were beaten again by Central Florida .
Washington stumbled in road losses to Arizona State and Stanford, falling out of national contention and even a shot at the Pac-12 title. The Huskies closed with another loss to Penn State in the Fiesta Bowl.
Now, it's on to a new year.
Here are some things to watch Saturday:
QUARTERBACK DUEL
Both teams are led by experienced quarterbacks: Washington's Jake Browning and Auburn's Jarrett Stidham.
Browning took a step backward as a junior after leading Washington to the national semifinals in 2016. He still threw for 2,719 yards and 19 TDs, but that was a major drop from the 3,430 yards and 43 touchdowns he passed for the previous season.

Auburn has high hopes for Stidham , who was one of the SEC's most efficient passers as a first-year starter. Auburn hasn't had a holdover starter at quarterback since Nick Marshall in 2014.
"We know what we are getting, at least at that position," Malzahn said.
QUESTION MARKS
Auburn lost four starting offensive linemen and the SEC's offensive player of the year, workhorse runner Kerryon Johnson. It's not entirely clear who might emerge as the Tigers' 10th straight 1,000-yard rusher.
Washington has plenty of experience on the offensive side with Browning, running back Myles Gaskin and the guys up front. But who will catch Browning's passes? Receiver is probably the most unproven position on the roster, though the Huskies have high hopes for Aaron Fuller.
SEC AURA
Washington is touted as the team that can make the Pac-12 relevant again in the national championship race. Every team in the league had at least three losses in 2017, which resulted in no serious contenders for a spot in the College Football Playoff. And the bowl season was downright dismal as the Pac-12 went 1-8 .
There are no such questions about the SEC, which hoarded both spots in the national championship game and will be looking for its 10th title in the last 13 years.
"We aren't playing their whole conference," Peterson said. "The rest of the Pac-12 has nothing to do with this game."
ELITE SECONDARY
Stidham will be facing one of the nation's best secondaries, led by safeties Jojo McIntosh and Taylor Rapp. Washington's' talent is just as good on the outside with cornerbacks Byron Murphy, Myles Bryant and Jordan Miller.
It may come down to what kind of pressure the Huskies can get on the Auburn quarterback. There are questions in the front seven, most notably who will replace defensive tackle Vita Vea.
Also keep an eye on Jimmy Lake, who is taking over as Washington's play caller on defense.
MERCEDES-BENZ CURSE
Auburn has nothing but bad memories of Mercedes-Benz Stadium, where the Tigers lost their final two games of 2017.
"This time around," Stidham said, "we're looking to play really well and get a win against a top team."
___
Follow Paul Newberry on Twitter at www.twitter.com/pnewberry1963 . His work can be found at https://apnews.com/search/paul%20newberry
___
For more AP college football coverage: https://apnews.com/tag/Collegefootball and https://twitter.com/AP_Top25