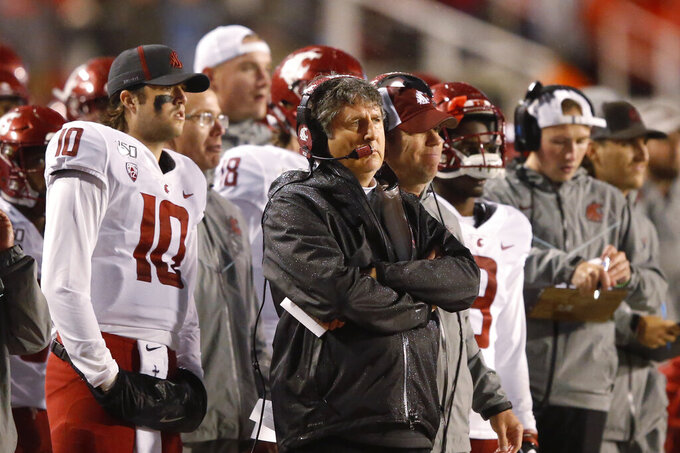 The Cougars have made some personnel changes on a squad that is yielding 30 points per game, ranking it 10th in the Pac-12. Leach said they are also simplifying defensive schemes that he believes were too complicated.

"We didn't have any shortage of strategy," Leach said this week. "We had too much strategy."

Claeys abruptly resigned last week after the Cougars gave up a total of 105 points in losing their first two Pac-12 games. Washington State gave up 50 points in the second half of a 67-63 loss at home to UCLA, which rode the second-biggest comeback in FBS history to victory. The Cougars followed that with a 38-13 loss at Utah.

After the Utah game, Leach called his players "fat, dumb, happy and entitled."

He also criticized his defensive backs for playing "street ball."

"I think guys just run around and do what they want to do," Leach said.

But Leach has insisted he was surprised by the resignation and said Claeys, a former Minnesota head coach who had been with the Cougars only 1 ½ seasons, was not pushed out.

"He chose to resign for his own reasons, which he wasn't very specific about," Leach said. "It was sudden and it was in the middle of things, but we wish him the best."

Claeys sent a tweet Friday that read: "The defense has struggled and I am responsible. We couldn't agree on solutions."

The Cougars defense is giving up 444 yards per game, ranking 105th nationally. They're giving up 178 rushing yards per game and have allowed teams to convert on 42% of third down situations. The one area where they excel is recovering opponent fumbles, where they lead the league with seven.

Bellantoni will call plays from the press box, while McBath will work down on the field, Leach said.

The Cougars held an all-team meeting after the Utah loss to discuss ways to improve.

Among the most effective speakers was Pat Nunn, a freshman who is moving into the starting lineup at nickelback, said offensive lineman Josh Watson.

"He's one of the younger guys around here, but I felt like he had a pretty good message in his speech," Watson told The Spokesman-Review .

Watson said it is more effective when players hold each other accountable.

"It's powerful when a coach does it, but you think about it more when it comes from your peers," Watson said.

Leach said Monday the team would consider some personnel changes on defense, and sure enough there were several when the depth chart was released.

Safety Daniel Isom was moved into a starting position at cornerback. Skyler Thomas will replace Isom at strong safety. Nunn takes over for Thomas at nickelback.

Dallas Hobbs will start at nose tackle, while previous starter Misiona Aiolupotea-Pei is now the backup. Backup nose tackle Lamonte McDougle is no longer listed on the two-deep chart.

There were some additional changes among the backup defensive players.

Washington State needs to win at least three of the next seven games to become bowl-eligible for a team-record fifth consecutive season.