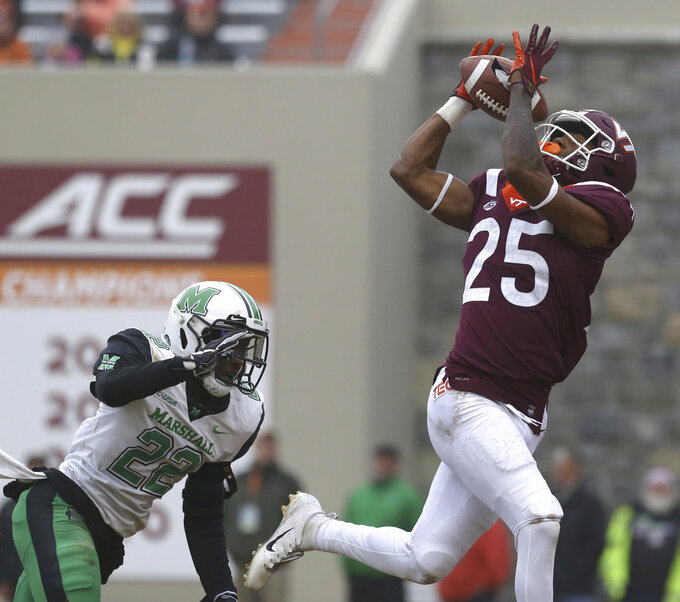 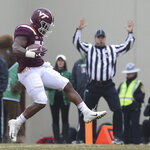 BLACKSBURG, Va. (AP) — Ryan Willis had the best half of his career, Virginia Tech set the tone early and the Hokies are going to a bowl for the 26th straight season.

Willis threw touchdown passes to four different receivers before halftime and Virginia Tech extended its nation's-best postseason streak with a 41-20 victory against Marshall on Saturday.

"We came out hot, the defense played great and my receivers made plays for me," Willis said after completing 18 of 26 attempts for 312 yards.

And he wasn't the only first-half hero.

Senior Ricky Walker made a strip sack of the Thundering Herd's Isaiah Green on the first play from scrimmage, setting a tone from the outset in the game that was scheduled specifically so the Hokies could try to extend their streak.

Virginia Tech (6-6) paid the Thundering Herd $300,000 to play the game, then put together one of their best efforts of the season.

"That set the tone," Walker said of the sack and fumble, which TyJuan Garbutt recovered at the Marshall 17. "Guys were excited and from there on we just played."

The opening drive ended with just a field goal, but then Willis took over. He threw scoring passes of 46 yards to Hezekiah Grimsley, 45 yards to Tre Turner, seven yards to Steve Peoples and 32 yards to Eric Kumah as Virginia Tech built a 31-6 halftime lead.

"Certainly getting to the number 26 was a part of this," Hokies coach Justin Fuente said of the bowl number, "but I really felt like it was bigger than that. Those kids in that locker room stood tall, stood strong when other people ran, and things weren't well, and things were tough. They stayed together and continued to battle."

And Willis, a transfer from Kansas who only became the quarterback when Josh Jackson was injured in the third game of the season, boosted his total to 22 touchdown passes this season.

"He threw the ball extremely well and their receivers made plays," Marshall coach Doc Holliday said. "I hadn't seen that all year out of those guys."

The Thundering Herd (8-4), which also received future scheduling considerations for agreeing to play the Hokies, turned the ball over on each of its first two drives and each time the Hokies converted. Garbutt's fumble recovery set up the first of two field goals by Brian Johnson, and Bryce Watts' interception in the end zone set up an 80-yard touchdown march.

"It's hard to dig out of that," Herd left guard Jordan Dowrey said. "It's the points they scored but also the points we didn't score because we lost possession. That stuff hurt us big."

Brenden Knox ran for 204 yards and two touchdowns for Marshall, and Green hit Xavier Gaines with a 34-yard TD pass.

Marshall: The Thundering Herd got off to a horrible start when Walker's hit on Green knocked the ball loose. Marshall held the Hokies to a field goal, but the start fired up the crowd of 31,336 on a rainy, cold day and gave the home team momentum it never relinquished.

"It's awesome. I'm happy for him," defensive coordinator Bud Foster said of Walker. "That play obviously gets that quarterback thinking about the rush a little bit."