WVU looks to avoid another loss to Purdy, No. 22 Cyclones 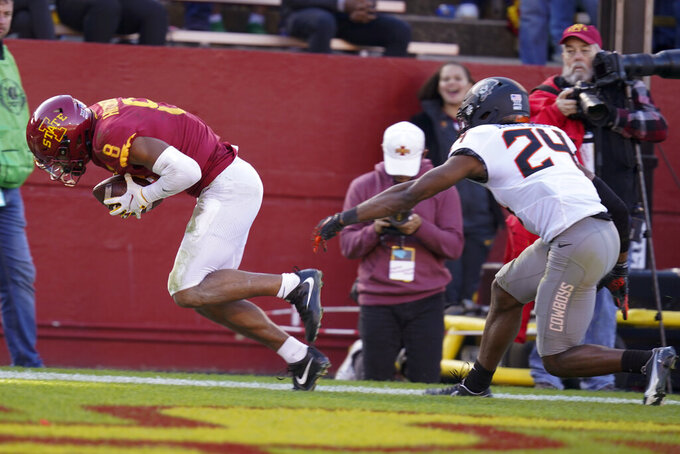 MORGANTOWN, W.Va. (AP) — West Virginia has yet to figure out a way to slow down Iowa State quarterback Brock Purdy.

The senior will get the chance to beat the Mountaineers for the fourth straight season Saturday when No. 22 Iowa State (5-2, 3-1 Big 12) plays at West Virginia (3-4, 1-3). He's already done it against Kansas, and another fourpeat is possible next month against Texas Tech.

“I just keep it simple, do what they ask me to do as a quarterback here and go from there,” Purdy said.

Purdy is second in the Bowl Subdivision with a 75% completion rate. He’s thrown for seven touchdowns against the Mountaineers in his career with two interceptions. He’s added two rushing TDs and has been sacked three times.

“The ball gets out of his hands fast,” West Virginia coach Neal Brown said. “He hurts you on third downs. That’s where he was really effective versus us last year. He’s scrambles around.”

West Virginia's offense was held out of the end zone last season at Iowa State and has averaged just 175 yards over the teams' last three meetings.

“What you have to do against them is you’ve got to eliminate the negative plays," Brown said. “Where they really feast on you is when they get you in second-and-long, third-and-long.”

Iowa State receiver Xavier Hutchinson is coming off one of his best performances and the 6-foot-3 senior will have a distinct height advantage against the smaller West Virginia secondary.

He had a career-high 12 catches for 125 yards and two TDs in a 24-21 win over Oklahoma State last week. Hutchinson’s 46 receptions lead the Big 12 and he’s third in receiving yards with 539. He’s one of five players in the Bowl Subdivision with two games with 10 or more catches.

"I’ve got a lot of respect for how he plays just because he finds ways to get open,” Brown said.

Iowa State coach Matt Campbell said he is confident that linebacker Mike Rose, who has started all 45 career games, will play after leaving the Oklahoma State game with an undisclosed injury. Rose is the reigning Big 12 defensive player of the year and the Cyclones’ leading tackler. Campbell said Rose has been dealing with “some nerve stuff” but has responded well to treatment.

Iowa State defensive end Will McDonald IV is a half sack away from tying JaQuan Bradley’s school career record of 25.5 sacks. McDonald, who set a single-season record with 10 sacks last year, has a Big 12-leading 7.5 this season after making two last week.

When he was recruiting McDonald, Campbell said, he wasn’t sure where McDonald would fit. He said McDonald could have been an elite tight end or outside linebacker as well.

“We knew he was dynamic playmaker of some sort,” Campbell said.

The Cyclones are trying to stay on track for a return trip to the Big 12 championship game. Iowa State is tied for second place with No. 15 Oklahoma State and No. 16 Baylor, behind No. 4 Oklahoma. The Cyclones lost to Baylor and still must play the Sooners.

“Just staying humble and continue to do what we do, we’ll be just fine and we still have the Big 12 championship as the goal for sure,” said Iowa State left tackle Jarrod Hufford.

West Virginia’s defense made just two interceptions over its first six games, then got two last week at TCU. Giving the defense a boost was cornerback Charles Woods, who got significant playing time after starter Nicktroy Fortune was injured in the second quarter.

Woods, a transfer from Illinois State, returned an interception 32 yards to set up a touchdown. He also had a fumble recovery and made five tackles, nearly matching his total for the entire season.

“I’ve been an underdog all my life,” Woods said. “I didn’t pass the eye test coming out of high school, so I just had to show people I belong on this level.”