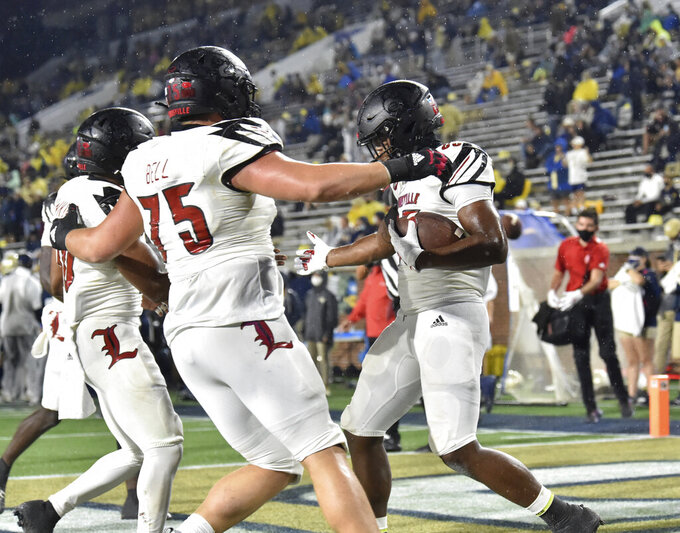 Louisville tight end Marshon Ford (83) celebrates with teammates after he scored a touchdown against Georgia Tech during the first half of an NCAA college football game Friday, Oct. 9, 2020, in Atlanta. (Hyosub Shin/Atlanta Journal-Constitution via AP)

Several Atlantic Coast Conference schools that reached the postseason in 2019 have work to do if they hope to return this year.

Since beating Duke in the opener, defending Coastal Division champion Virginia (1-2) has lost to No. 1 Clemson and North Carolina State by double digits. Louisville (1-3, 0-3 ACC), predicted to finish fourth in the preseason media poll, has dropped three in a row.

Already struggling to replace key players from an eight-win squad, Wake Forest (1-2, 0-2) has had its schedule upended by the coronavirus pandemic. Florida State (1-3, 0-3) is transitioning under first-year coach Mike Norvell, a difficult process that involved a scare by FCS Jacksonville State two weeks ago before rallying to win 41-24 with a third-string quarterback.

With 10 ACC matchups among an 11-game schedule — changes caused by the pandemic — more challenges were expected. The four teams struggling the most, and several just above them in the standings, need to turn things around if the conference hopes to again lead the nation in bowl bids for a third consecutive season.

The upside is they have time with two thirds of the season left to play.

“We’re playing with more urgency and more focus once we’re behind,” Virginia coach Bronco Mendenhall said, noting the Cavaliers’ tendency to create early deficits. “It can’t take us to be behind to play with that urgency and focus.

“There might be other factors as well, but it’s making it difficult right from the beginning to have the kind of start that we want.”

After an impressive turnaround from 2-10 in 2018 to 8-5 with a bowl win in Scott Satterfield’s first season as coach, Louisville is enduring a losing streak it avoided last fall.

Defensive breakdowns against Miami, poor pass protection at Pitt and three fumbles last week at Georgia Tech have hurt the Cardinals. While their chances of bouncing back appear slim Saturday at No. 4 Notre Dame, addressing those concerns is an important step toward reversing their fortunes.

“We’re trying to build off of what we are doing good, and then trying to try to correct the mistakes that we have made,” Satterfield said. “What we tell them is, ‘listen, you got to drown out any kind of noise, any kind of negative talk that’s out there, and then focus on what we can control.”

Added Louisville offensive lineman Cam DeGeorge, “You just got to go in and come out with the W. We’re preparing and hope to accomplish our goals.”

The challenge is finding a balance between the desire for a quick result and remaining patient and letting the process evolve. That measured approach might be difficult with a compacted gauntlet of additional league foes having replaced the non-conference matchups that normally allow teams to smooth things out.

But with the COVID-19 pandemic canceling spring practice and jeopardizing the season itself, this fall was going to be different.

“I think everything about the season has sort of lent itself to that,” ACC Network analyst Roddy Jones said, “especially the teams that have games delayed or canceled in game week. You have no idea when any of that stuff is going to pop up.

Or in the case of Wake Forest, worrying about filling additional days.

The Demon Deacons’ bumpy season started with a loss to Clemson and then a shootout road defeat at North Carolina State. A coronavirus-related postponement of the Sept. 26 game against Notre Dame followed, prompting the school to move up its nonconference game against Campbell a week earlier, and then another open date.

That left Wake extra practice time to focus on improving fundamentals with one game in a three-week span.

“We need to play games,” coach Dave Clawson said. “And we’re going to hopefully have a chance to do that now three weeks in a row.

“And with missing spring football, it’s just all the accumulation of reps that these players are getting in practice (that) I really hope will make us an improved and. … an ascending football team as the year goes on. And we’re certainly going to have to be that.”

FSU’s defensive front seven have room for improvement, but the offense appears to be making strides with quarterback Jordan Travis. The former No. 3 came off the bench to rally the Seminoles past Jacksonville State and was solid in last week’s loss to Notre Dame.

Travis understands the high expectations in Tallahassee after a 6-7 season saying, “We should be winning.” Norvell also gets the fan base's win-now attitude but stressed the importance of assembling the pieces to get the results.

“We’re looking to build us the right way,” the coach said. “If all you’re doing is looking three steps ahead and just focused on Saturday night, then you’re gonna miss out on the opportunity to grow and get better today.”