Card and No. 21 Texas face tough road trip to Arkansas next 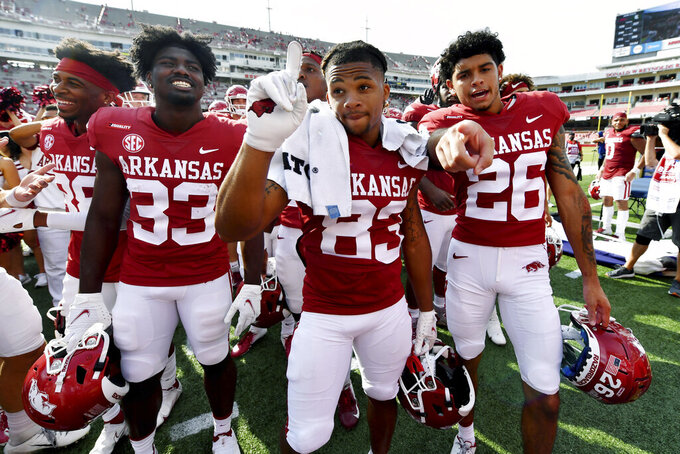 AUSTN, Texas (AP) — Hudson Card was solid, and occasionally great, in his first career start as the Texas quarterback.

Now he has to duplicate that effort on the road, at night, in front of a hostile sellout crowd in a legacy rivalry that will soon be reborn when Texas joins the Southeastern Conference. After beating No. 23 Louisiana-Lafayette 38-18, No. 21 Texas plays at Arkansas (1-0) this week.

“It will be an experience. I know their crowd will be jumping," Card said Monday, two days after throwing for 224 yards and two touchdowns and running for another score in his starting debut.

A second-year freshman from nearby Lake Travis, Card has heard plenty about the bygone days of the old Southwest Conference, the rivalry with Arkansas, and the “Game of the Century” — the No. 1 vs. No. 2 matchup in 1969 also known as “The Big Shootout" — that set up a Longhorns national championship.

The programs have met only a handful of times since the Razorbacks went to the SEC in 1992, but the matchup is full of lore among the old-timers around both programs.

“I know this rivalry goes way back,” Card said. "It's the first time we've played them in a while. It will be cool to bring it back, especially in the next couple of years when we go to the SEC."

The official timetable for that move is several years away, although many believe it could happen much sooner. Card's more immediate future with the Razorbacks is Saturday night in Fayetteville, where Arkansas will have its first sellout since 2017.

Any team would like the security blanket of having a quarterback with more than a few road games under his belt. Card will have to deal with a true road environment with screaming fans and momentum swings for the first time.

Card didn't show any nerves in his first start in front of about 80,000 at home. He shook off a 3-and-out series on Texas' first possession to lead a touchdown drive on the second.

Texas coach Steve Sarkisian trusted Card early to go for it on fourth down at midfield, and Card scrambled out of pressure for a first down. He then called an audible to set up his first career touchdown pass, a 18-yard toss to Bijan Robinson.

“When a play breaks down, it calls for something like that,” Card said of his drive-saving scramble. “Obviously, it's pass first and try to get the ball in the playmaker's hands, but if something breaks down, being able to do that is good.”

“It's always been a dream of mine to be the quarterback here,” Card said. “To live it was pretty special.”

The only slipup was not asking to keep a game ball from his first career start and win.

Sarkisian said he's confident Card will handle the pressure of a road environment at Arkansas.

“It's another ‘new' for him, right? He played his first game here, in front of a crowd we had, and now the next ‘new’ is going on the road and playing a good opponent and dealing with that hostile environment," Sarkisian said. “I can't predict the future, but we'll do everything we can to make sure he's in the right frame of mind.”