Mullen: QB Richardson to 'do a little bit more at practice' 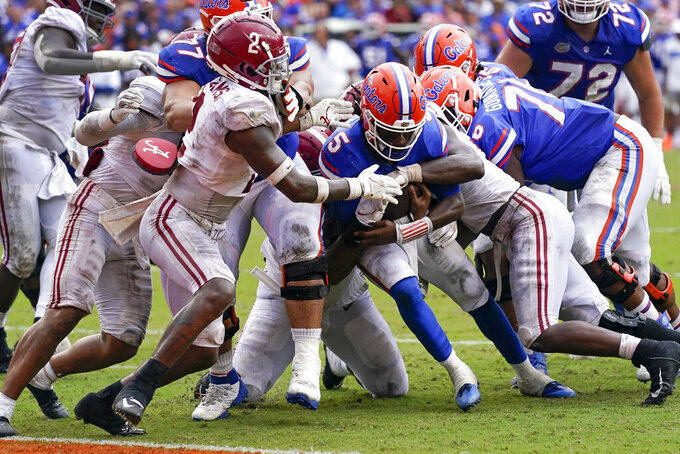 Florida quarterback Emory Jones (5) pushes his way past the Alabama defense including defensive back DeMarcco Hellams (2) for a 5-yard touchdown run during the second half of an NCAA college football game, Saturday, Sept. 18, 2021, in Gainesville, Fla. (AP Photo/John Raoux) 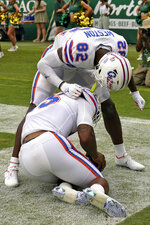 Richardson was held out of Saturday’s 31-29 loss to Alabama as a precaution after the redshirt freshman strained his right hamstring near the end of an 80-yard run the previous week.

Mullen decided Richardson would only be available in case of an emergency against the top-ranked Crimson Tide, saying team doctors told him the dynamic backup “could definitely make it worse” by playing against the defending national champions.

With Richardson reduced to a spectator, starter Emory Jones did enough to put the Gators in position to stun Alabama late in the game.

Jones completed 17 of 27 passes for 181 yards, with an interception. He also ran 19 times for 76 yards and a score. He was at his best late, directing a 99-yard drive in the third quarter and a 75-yarder that gave the Gators a chance to knot the game with a 2-point conversion that failed.

Jones was booed at times, partly because Florida fell behind 21-3 in the first quarter and surely because the home crowd was disappointed in not seeing Richardson.

“I always knew I was a guy that could come back from adversity,” Jones said Monday. “I threw a pick early on in the game. I didn’t really get down on it. … I just tried to keep the team going and get us back in the game.

“We learned just how much fight we have, and we got a lot of confidence from that game.”

Richardson was the main reason anyone gave the Gators a chance against two-touchdown favorite Alabama. He turned in consecutive eye-popping performances off the bench in Florida's first two games.

He had a 73-yard touchdown run in the opener against Florida Atlantic and was even better the following week at South Florida, connecting on TD passes of 75 and 40 yards to Jacob Copeland and scampering for that long score late before grabbing his leg.

The Gators (2-1, 0-1 Southeastern Conference) performed tests on his hamstring all week and were pleased with Richardson’s progress. They expect another week will allow him to be good to go against the Volunteers (2-1, 0-0).

“We’ll see how he responds this week,” Mullen said. “We did an MRI on Friday. It came back much better than we thought it would be. But still not at 100%. So we wanted to be pretty precautious.

“In meeting with the medical staff, there was a pretty solid feeling (that) if he didn’t play in the (Alabama) game … that he would be 100% by this Saturday.”