No. 10 NC State seeking landmark win over No. 5 Clemson 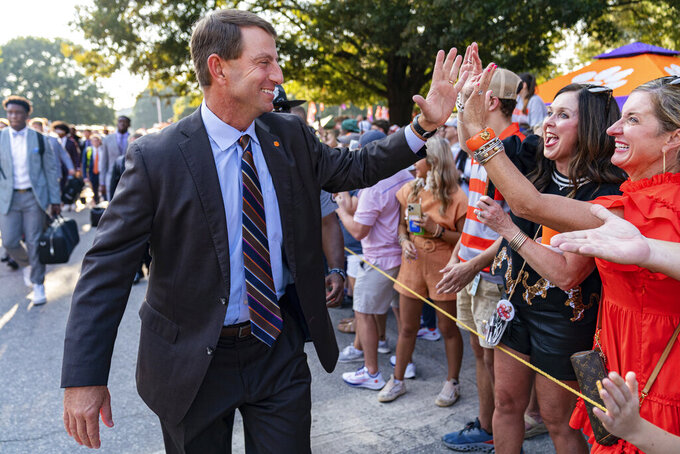 CLEMSON, S.C. (AP) — No. 10 North Carolina State understands what it takes to beat Clemson. The Wolfpack would sure like to add a second-straight landmark win over the Tigers on Saturday night.

The Wolfpack (4-0) open Atlantic Coast Conference play with one of their most critical games of the year. Top the Tigers (4-0, 2-0 ACC) and North Carolina State has an early leg up — along with a tiebreaker if both schools finish with the same league mark — in the ACC Atlantic Division.

NC State quarterback Devin Leary said last year's win over then-ninth-ranked Clemson was certainly a confidence builder for a team that had lost its previous eight to the Tigers.

That victory at home showed “we can compete with the best as long as we prepare and do our jobs,” said Leary, the ACC preseason player of the year. “I think we got a little bit of a taste of that last year.”

Plenty of eyes will be on this contest, NC State's first top-10 matchup. ESPN is in town with “GameDay” and Memorial Stadium is sold out.

Clemson coach Dabo Swinney knows how difficult the Wolfpack can be. “We've had some games here and there that got out of hand, but most of them have been hard-fought games,” he said. “I'm sure this will be the same.”

The Tigers have relied on a rejuvenated offense under quarterback DJ Uiagalele i to stay perfect. Uiagalelei had thrown for 10 touchdowns this season, already more than his nine TD throws in 2021.

“He's just in a different place,” Swinney said of his junior passer. “He's very confident and playing with a lot of joy. He was not very confident last year.”

N.C. State can look at Wake Forest’s offensive plan in last week’s shootout loss to the Tigers for an indication of what could work. The Demon Deacons had six touchdown passes and were aggressive in pushing the ball downfield to attack an injury-battered secondary.

“You see what they did and you tip your hat to them," Wolfpack offensive coordinator Tim Beck said. “But I don’t know if we’ll get the same (looks) or not.”

“It’s a normal week,” Swinney said. “We’re getting our team ready to play.”

Still, both Clemson and North Carolina State had their ball-handlers working with soggy footballs to prep for what may come Saturday night.

Leary said before the snap at practice, someone will walk by with a water bottle and squirt the football. “And occasionally just throw (water) up in your face. So we’re prepared for anything at this point," he said.

The Tigers played Wake Forest without safety Andrew Mukuba, cornerbacks Sheridan Jones and Malcolm Greene and defensive end Xavier Thomas. Swinney was hopeful his players in the secondary might return this week.