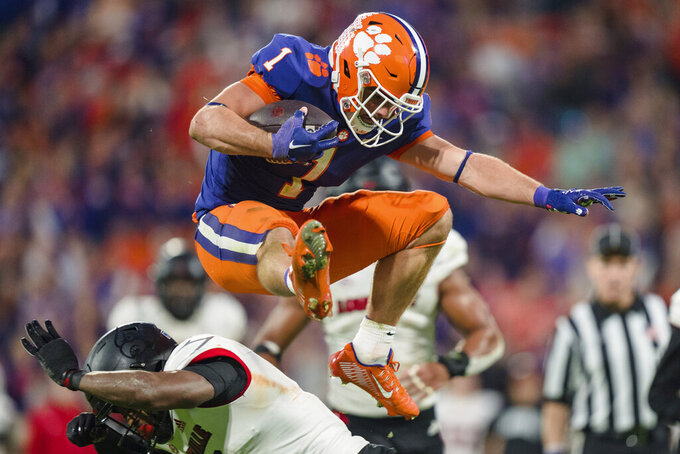 Clemson running back Will Shipley (1) hurdles over Louisville safety M.J. Griffin (26) on his way to a touchdown in the second half of an NCAA college football game, Saturday, Nov. 12, 2022, in Clemson, S.C. (AP Photo/Jacob Kupferman)

CLEMSON, S.C. (AP) — DJ Uiagalelei had plenty of his own accomplishments to feel great about in No. 12 Clemson's 31-16 win over Louisville. Instead, the Tigers' starting quarterback gushed about teammate Will Shipley's picture-perfect hurdle over Cardinals safety M.J. Griffin on a touchdown run.

“Man, that hurdle was crazy,” said Uiagalelei, a huge smile on his face. “When you think about it, that guy was standing straight up.”

Shipley, the Tigers’ tailback, put up a signature play in the third quarter Saturday with a straight-ahead, 25-yard burst as he hurdled Louisville safety Griffin to reach the end zone.

And after Shipley landed, he moved between two other defenders to finish off the scoring run that put the Tigers ahead 24-10 and sent them on the way to a 39th straight home win.

Uiagalelei, who ran for a score and threw for a second, said the team's mindset was to return to what they had done in opening 8-0.

“We definitely wanted to play great tonight, we wanted to dominate,” Uiagalelei said. “We wanted to get back on track to how we play offense.”

The Tigers (9-1, 7-0 Atlantic Coast Conference) had wrapped up the ACC Atlantic Division — and its spot in the league title game next month — a week ago. Now, they'll claim the berth as solo division champs.

Clemson improved to improve to 8-0 all-time over Louisville (6-4, 3-4). The Cardinals, who came in with a four-game win streak, played the second half without standout quarterback Malik Cunningham, who was hurt on the last play of the second quarter.

Uiagalelei completed 19 of 27 throws for 185 yards. Phil Mafah ran for 106 yards and Shipley 97 as the Tigers finished with 248 yards on the ground.

Clemson needed a fast start and got it. Uiagalelei led a 12-play, 75-yard scoring march on the opening drive that he ended with a nifty 11-yard run as the Tigers built a 10-0 lead.

Uiagalelei's 4-yard pass to freshman Antonio Williams with 32 seconds left before the half sent Clemson into the break up 17-7.

Williams had a career best 10 catches for 83 yards.

Louisville was held to 160 yards in the first half — and 61 came in the final half minute as the Cardinals moved to the Clemson 14 before the clock ran out.

Cunningham looked like he had the speed and a path to the end zone on the half's final play, but he stumbled cutting across the field and fell. Trainers came out as the team headed to the locker room and Cunningham spent a few minutes on the field before joining them.

Cunningham did not return due to a right shoulder injury as Brock Domann took over at quarterback. Louisville coach Scott Satterfield said Cunningham was day-to-day heading into next week's game against No. 17 North Carolina State, and he'll know more as the week goes on.

“There's a lot of positive to take from this game,” Satterfield said. “We go back to our place next week, Senior Day, we've got to regroup.”

Louisville: The Cardinals four straight wins to gain bowl eligibility was a solid step for the program. However, if Cunningham is significantly hurt, it could dent the positive vibes around a team that bounced back from an 0-3 ACC start.

Clemson: The Tigers will feel better about themselves after their decisive win over Louisville. But the offense still lost three fumbles (two by Shipley) and the defense was hit for several big plays that kept Louisville in this one much longer than necessary.

Clemson played without leading tackler in linebacker Trenton Simpson, starting offensive lineman Walker Parks and punt returner Will Taylor. All were announced out shortly before the kickoff. Starting defensive end Xavier Thomas re-injured the foot that kept him out of the first five games and he won't return this season.

Clemson closes its ACC regular season against Miami on Saturday.