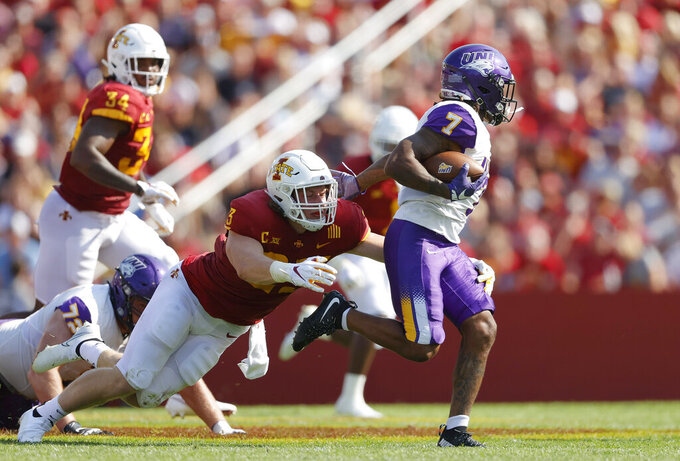 AMES, Iowa (AP) — After another struggle with Northern Iowa, No. 7 Iowa State can turn its attention to its top in-state rivalry.

Datrone Young had a big interception with 2:05 left in the fourth quarter and the Cyclones staved off upset-minded Northern Iowa 16-10 Saturday to avoid becoming just the second top-10 team to lose to a team from Division I's second-tier.

Iowa State was in danger of being on the short end of the biggest FCS over FBS upset since Michigan was No. 5 when it suffered a memorable loss to Appalachian State in 2007.

Having survived the opening close-call, Iowa State will likely head into he Cy-Hawk game next week against No. 18 Iowa ranked for the first time in the history of a series that dates to 1899.

Brock Purdy completed 21 of 26 passes for 197 yards, but the Cyclones were kept off-balance by a defense that returned all of its starters. Breece Hall, who led the nation with nine 100-yard games last year, was held to 69 yards on 23 carries.

Northern Iowa had two chances with the ball after Connor Assalley's 21-yard field goal put the Cyclones up 16-10 with 6:18 left.

Young intercepted Will McElvain’s third-and-12 pass at the ISU 25 to end the second-to-last possession.

The Panthers forced a three-and-out and got the ball back at their 10 with 1:02 to play. McElvain got UNI to its 42 and threw to Sam Schnee, who was brought down at the Cyclones 43 as the clock ran out.

Iowa State, which has its highest preseason ranking in program history, was able to escape against an in-state rival that has won in Ames three times since 2007.

“What wasn't good was the little things,” Campbell said. “Offensively, you're talking about just a couple areas where you're a hair off.”

The Panthers beat Iowa State in Campbell's debut in 2016 and pushed the Cyclones to three overtimes before losing 29-26 in 2019.

Hall ran the ball just twice in the first quarter, but accounted for a combined 42 rushing and receiving yards as the Cyclones marched 59 yards on their first possession of second quarter. Hall put Iowa State ahead 10-7 with a 2-yard run, and the Cyclones led 13-10 at half.

Hall, who rushed for 1,572 yards and averaged 5.6 yards per carry in 2020, was held in check the rest of the game. He lost 2 yards when Iowa State was facing a third-and-goal from the 2 before Assalley kicked his second field goal.

“We're all happy we won the game,” Hall said, “but we feel like we could have done better.”

Iowa State: Hall, who has received preseason Heisman Trophy mention, struggled most of the game but scored a rushing touchdown in a school-record 13th straight game. That's also the longest active streak in the nation.

Northern Iowa: The Panthers, who didn't play last fall because of the pandemic, returned 22 starters after going 3-4 during a spring season. McElvain beat out Michigan State transfer Theo Day for the starting job and showed flashes. Day did not play.

Iowa State, in the AP Top 25 for 14 straight weeks, should stay but will the still be in the top 10?