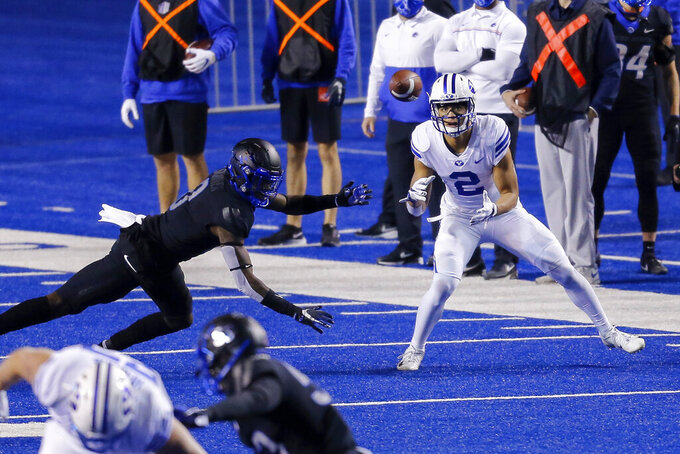 BYU wide receiver Neil Pau'u (2) waits for a pass during the first half of the team's NCAA college football game against Boise State on Friday, Nov. 6, 2020, in Boise, Idaho. (AP Photo/Steve Conner) 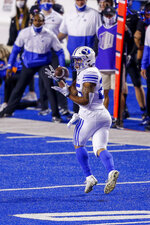 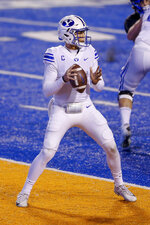 BOISE, Idaho (AP) — BYU hasn’t had many chances this season to prove that it’s deserving of its lofty No. 9 ranking. On Friday night, the Cougars took full advantage of their first game against a ranked team.

And it was nothing short of impressive.

Zach Wilson threw for 359 yards and two touchdowns and Tyler Allgeier rushed for 123 yards and a pair of scores as BYU routed No. 21 Boise State 51-17.

BYU (8-0), which beat Boise State on the road for the first time in six tries, is off to its best start since 2001 when the Cougars started 12-0. It’s also the first time in school history that BYU has scored 50 points or more against a ranked opponent.

Wilson, who originally committed to Boise State before signing with BYU, completed 21-of-27 passes and threw TDs of 5 and 20 yards. He also found the end zone on a 4-yard run.

The projected first-round NFL draft pick said he doesn’t begrudge anyone for questioning how good of a team BYU is during these unprecedented times.

“People still doubted us, but I don’t blame them for that,” Wilson said. “It’s hard to tell how good we are with how our season has switched up, but each week is an opportunity for us to prove ourselves. (This win) doesn’t mean anything unless we keep winning.”

Meanwhile, Boise State (2-1) suffered its worst loss since a 64-19 rout by rival Idaho in 1996, the Broncos first year as an FBS program. Boise State lost the 1997 season opener to Cal State Northridge by 40 at home but that game was later forfeited to the Broncos.

“It’s embarrassing,” Boise State linebacker Riley Wimpey said of the loss. “And we need to we need to figure it out so … that never happens again.”

“The first half wasn’t our best,” BYU coach Kalani Sitake said. “When I walked into the locker room, there were already conversations going on. Leaders were already talking. I didn’t have to say much. The truth is, the players had the answers for themselves. They knew we weren’t playing to our standards and they corrected it.”

The correction was to the tune of 21 points, staking the Cougars to a 38-3 lead entering the fourth quarter.

“They came out and they put on a show,” Boise State receiver Khalil Shakir said. “And the thing that hurts the most is that it was on our ‘Blue’ and, you know, we have that, ‘Protect the Blue’ mentality. We didn’t do what we wanted to do tonight and we just have to step up as a whole.”

Boise State worked with local health authorities to allow fans into the stadium for the first time this season. A total of 1,100 were admitted, including parents, students, and the BSU band. Not many remained by the end of the third quarter.

BYU: With a watered-down schedule due to COVID, the Cougars needed a big win to make a more pressing case to earn an invite to a New Year’s Six bowl this season. While BYU isn’t eligible for an automatic spot reserved for schools from the Group of Five conferences, it can can earn at at-large berth but would likely need an undefeated season to be considered. And with just two home games remaining against North Alabama and San Diego State, BYU appears to be in good position to finish a perfect regular season for the first time since 1984.

Boise State: The Broncos have another short week before returning to conference play, and it couldn’t have come at a worse time. Boise State have been without starting quarterback Hank Bachmeier for the past two weeks and were missing four other starters against BYU, including leading rusher George Holani and wide receiver Octavius Evans. If the Broncos can’t get those key players back on the field, their conference slate figures to be tougher now than expected.

Boise State returns to conference action on Thursday, for a home tilt with Colorado State.