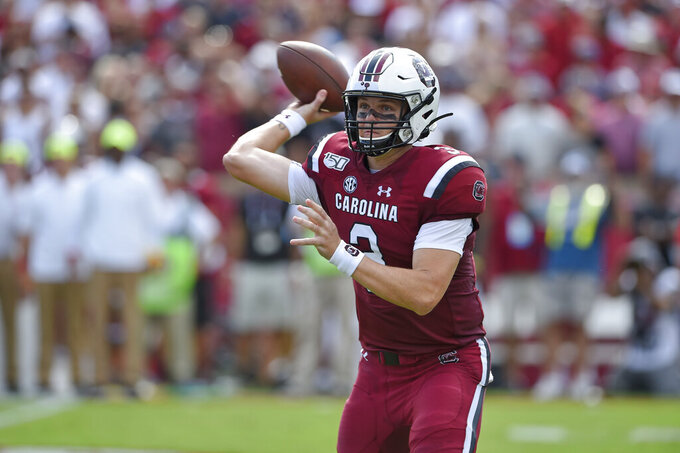 COLUMBIA, S.C. (AP) — South Carolina's players understand the early challenge they have to prevent their season from fully spiraling out of control.

There were a lot of grim faces, steady eyes as the Gamecocks seemed more focused at practice this week.

South Carolina (1-2, 0-1 Southeastern Conference) has lost both its Power Five games this season along with its senior starter at quarterback. The team now must regroup in time for a pair of decisive games that could very well shape their season.

The first hurdle is Saturday at Missouri against former Clemson quarterback Kelly Bryant, who riddled the Gamecocks two years ago. After that is a date with Kentucky, which is riding a five-game win streak over South Carolina.

And the Gamecocks will have get it done with freshman quarterback Ryan Hilinski, a backup when the season started but is now replacing starter Jake Bentley. He suffered a left foot fracture in the opening loss to North Carolina and is out for the season.

"We're just focusing on what's ahead," defensive back Israel Mukuamu said. "We just have to go out there and do what we have to get a win."

South Carolina's secondary must certainly step up its game going forward after giving up five passing touchdowns to Tua Tagovailoa in a 47-23 win by No. 2 Alabama last week. It seems a given that Bryant, who threw for 272 yards two TDs wen Clemson beat the Gamecocks 34-10 in 2017, would look to follow Tagovailoa's game plan against South Carolina.

Mukuamu said his position group has dug in so far at practice to get better. They won't see the likes of Alabama star receivers like Jerry Jeudy and Henry Ruggs III, but they'll have to slow down a Missouri quarterback that's third in SEC passing yards.

"It's a mindset," Mukuamu said. "It's working harder. We just want to come out there and do the right things to win the game."

Losing to Missouri and Kentucky would leave South Carolina in a 1-4 (0-4 against Power Five schools) hole with games remaining against No. 3 Georgia, No. 17 Texas A&M and No. 1 Clemson.

Gamecocks coach Will Muschamp said practices this week have been rugged and intense. There was an anger, he said, after the Alabama loss in the South Carolina locker room.

Muschamp met with team leaders Sunday to lay out where the Gamecocks are and the positives and negatives of what's ahead.

"Understand where we are right now to crawl out of it and that's what we want to do," he said.

Hilinski, the 6-foot-3, 230-pound freshman, is helping South Carolina make that climb out. He threw for 324 yards and two touchdowns in the Alabama loss, earning SEC freshman of the week honors.

Bentley had surgery for his Lisfranc fracture last week and is recovering. Muschamp said he saw Bentley around the complex the other day and expects him to help tutor and work with Hilinski as the season continues.

Missouri coach Barry Odom said his offense can't be swayed by the so-so play of South Carolina's secondary last week. The Gamecocks' defensive backs have a high "skillset and they play to that. Long players that cover a lot of space and they're active around the ball," he said.

The Tigers (2-1) have won two straight after an opening week loss at Wyoming. South Carolina starts their SEC season.

The Gamecocks hope a tough week of work can set a new direction for their season, starting at Missouri.