Yale rallies in darkness for 50-43 2OT victory over Harvard 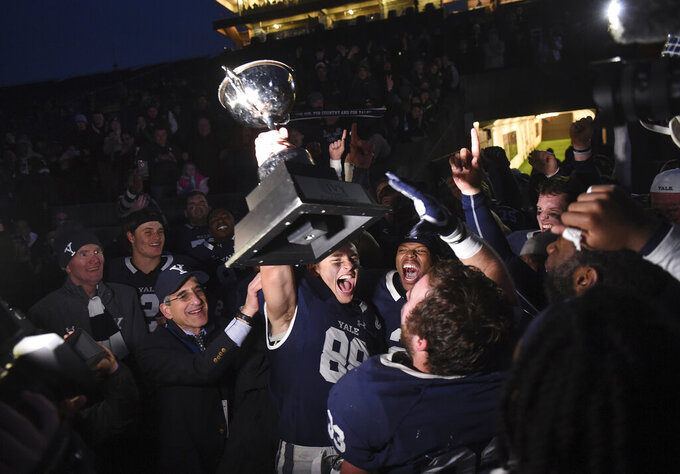 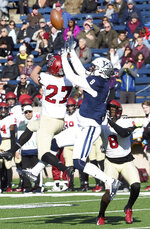 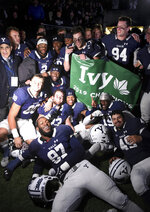 NEW HAVEN, Conn. (AP) — Yale and Harvard students poured out of the stands together at halftime in a climate change protest that delayed the 136th edition of The Game for about an hour.

Kurt Rawlings threw two touchdown passes in the final 88 seconds of regulation to rally Yale from a 17-point fourth-quarter deficit and beat Harvard 50-43 in two overtimes on Saturday, one of the strangest editions of The Game in its 144 years of history.

Following a halftime sit-in by a couple hundred protesters who occupied midfield for about an hour before being peacefully escorted off by police, the Bulldogs (9-1, 6-1 Ivy League) celebrated a conference title in darkness 15 minutes after sunset in the unlit, 105-year-old Yale Bowl.

Fifty-one years after Harvard rallied to a late tie that The Crimson student newspaper trumpeted with the headline "Harvard Beats Yale 29-29," it was Yale that came back, marching 96 yards for one score and then recovering an onside kick to set up another. The victory gave Yale a share of the Ivy title; Dartmouth beat Brown Saturday to also finish 9-1.

“This game was a lot better because we won,” Yale coach Tony Reno said. “People say it’s the greatest rivalry in all of sport. I think it was on display today.”

Rawlings, who threw for 417 yards and ran for 62, threw another touchdown on Yale’s first possession of overtime, and Zane Dudek ran for a score on the second. After stopped Harvard on fourth down in the second OT, Yale players ran onto the field, where they were joined by the fans remaining in the stands 4½ hours after the opening kickoff.

“A bit of a debacle,” said Harvard coach Tim Murphy, who fell to 18-8 in the rivalry game.

Reed Klubnik caught nine passes for 141 yards for Yale and recovered the onside kick to set up the game-tying score. After falling on the ball near the Bulldogs sideline, he stood up and held the ball aloft while the stadium broke into a huge cheer.

“I think we knew before that play even happened what we were capable of,” Klubnik said. “Once the ball was back in the offense’s hands, we knew were going down to tie the game.”

Borguet scored on a 67-yard run with 13:03 left in the fourth quarter to give Harvard a 36-19 lead, and Yale responded with only a field goal. But Rawlings moved the Bulldogs 96 yards on the next drive, converting a third down with a 28-yard pass to Mason Tipton to the Harvard 10 and then hitting Tipton again on the next play for the score with 1:28 left in regulation.

Klubnick recovered a perfectly executed onside kick, and Rawlings marched the Bulldogs to the Harvard 11. After scrambling for six yards, he was hit hard and fumbled — his third of the day. But Cameron Warfield recovered for Yale, and then Rawlings connected with Shohfi for a 7-yard score; the extra point made it 36-all.

Harvard connected on a 25-yard pass from Jake Smith to Cody Chrest to open overtime, but Rawlings found Caden Herring from 9 yards out to tie it. Yale scored on Dudek’s 4-yard run to start the second overtime before stopping Harvard on downs.