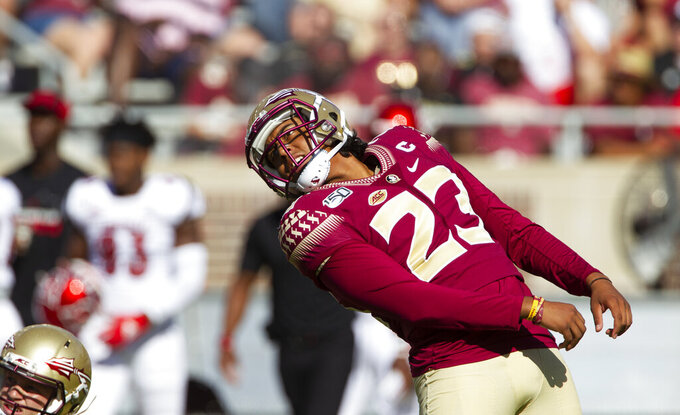 TALLAHASSEE, Fla. (AP) — Florida State let fourth-quarter leads slip away against Boise State and Virginia. Even Louisiana-Monroe tied up the game before Florida State won that game in overtime.

The Seminoles weren't about to let this opportunity slip away again.

Cam Akers scored three touchdowns and Alex Hornibrook came off the bench and threw a 60-yard touchdown pass in the fourth quarter as Florida State defeated Louisville 35-24 on Saturday.

Akers ran 29 times for 112 yards for Florida State (2-2, 1-1 Atlantic Coast Conference), which had a season-high 522 offensive yards. His final score, a 1-yard touchdown run with 1:37 to go, secured a win after the Seminoles let late leads slip away in losses to Boise State and Virginia.

"We had some music on, some coaches were dancing," Hornibrook said. "Some people that shouldn't have been dancing were dancing. It was awesome. That's what you play football for — those feelings like that."

The Seminoles had good feelings early but nearly let another opportunity to win slip away after squandering a 21-0 lead after the first quarter. But they finished off a win, and did it even after losing quarterback James Blackman to a knee injury in the third quarter. Florida State coach Willie Taggart said Blackman will undergo further tests on Sunday.

Louisville's Malik Cunningham threw for two touchdowns and ran for another as the Cardinals were able to storm back to score 24 straight points and take a short-lived fourth-quarter lead. Cunningham connected with Dez Fitzpatrick for a 74-yard touchdown with 14:22 left that gave Louisville its first lead, 24-21.

Hornibrook was expected to make his Florida State debut and was inserted into the game in the first quarter, tossing a 44-yard touchdown pass to Keyshawn Helton on his first throw for the Seminoles. When Blackman was lost to injury on Florida State's first drive of the second half, the Wisconsin graduate transfer then took over.

Despite three punts and a missed field-goal attempt on Florida State's first four drives of the second half, Hornibrook remained composed. He put the Seminoles ahead for good, 28-24, on a touchdown pass to Tamorrion Terry with 7:25 left in the game. Hornibrook completed 15 of 20 passes for 255 yards and two touchdowns.

"Proud of this football team," Taggart said. "Each week we keep improving. For our guys to come here and play the way they did and play the fourth quarter and find a way to win the ballgame was big for our football team."

Saturday's win was the 300th for FSU at Doak Campbell Stadium, which opened in 1950. The Seminoles have a .755 win percentage at the stadium.

Cunningham completed 16 of 27 passes for a career-high 286 yards. But Cunningham had a costly red-zone interception in the fourth quarter and Louisville (2-2, 0-1) missed out on its first ACC win since 2017.

Fitzpatrick caught seven passes for 133 yards and a touchdown for Louisville.

"Way too many mistakes I think initially in this football game in the first quarter, getting down 21-0 there," Louisville coach Scott Satterfield said. "I'm proud of our team. There are a lot of teams that could just have folded right there, and we continued to battle and fight. ... We've just got to learn how to finish. The bottom line for us is just way too many mistakes.

"We've got to clean up a lot of different things because the rest of the seven (ACC) games will be like this if we don't get it cleaned up."

Ricky Aguayo missed field-goal attempts from 51, 47 and 41 for the Seminoles that could have put the game out of reach.

Cunningham was injured on the final play of the game. Satterfield said Cunningham suffered a leg injury and will have further tests. Louisville started Cunningham in part because Jawon Pass was not available on Saturday due to injury ... Florida State lost starting linebacker Jaiden Lars-Woodbey (leg) to injury.

Louisville: Louisville clawed its way back after giving up 21 first-quarter points, the most since an Oct. 5, 2018, loss to Georgia Tech. But the Cardinals couldn't hold off Florida State's rally.

Florida State: Akers now has eight touchdowns (six rushing and two receiving) in four games and the Seminoles have defeated the Cardinals in back-to-back seasons.