Alabama favored vs. Michigan in the Citrus Bowl 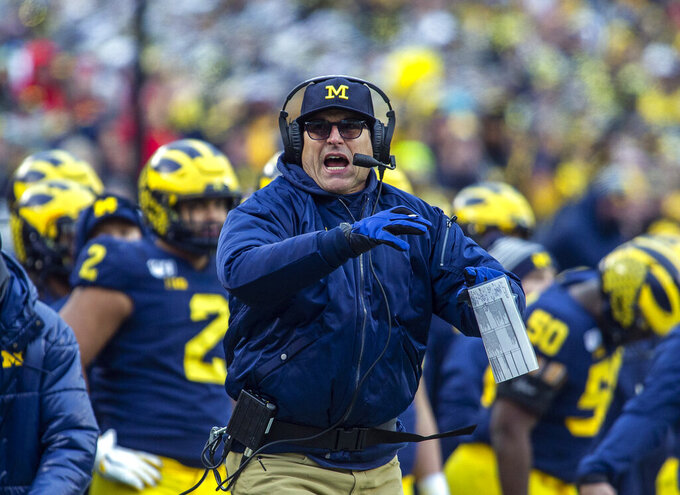 Alabama will seek a win that would likely assure the Crimson Tide a 76th consecutive appearance in the top 10 spots of the AP Top 25 poll. If that happens, it would tie Oklahoma (and presumably Clemson) for the fifth-longest such streak in history. Michigan is trying to reach the 10-win mark for the fourth time in the last five seasons.

Alabama coach Nick Saban vs. Michigan coach Jim Harbaugh. Sounds silly, but it is true. These two have jousted through words and tweets in recent years over things like satellite camps, and now they go head-to-head for the first time in their respective coaching careers. Expect a chess match.

Alabama: WR Jerry Jeudy is expected to be a high first-round draft pick, and enters this matchup 41 yards shy of a second consecutive 1,000-yard receiving season. He has 23 touchdown catches in his last 27 games.

Michigan: CBs Ambry Thomas and Lavert Hill will have to embrace the challenge of facing Alabama’s extremely talented wide receiver corps, and both have the skills to make big-time plays.

Michigan won the Citrus Bowl in Harbaugh’s first season (2015) but has gone 0-3 in bowl games since. ... Alabama is seeking a fifth consecutive year with at least one postseason (bowl or College Football Playoff game) win. It would be the Crimson Tide’s longest such streak since six straight from 1975 through 1980. ... Saban is ending his 13th season at Alabama. The last 12 have seen the Tide win at least 10 games, and a win would make this the ninth consecutive season in which Alabama finishes a year with two losses or fewer. ... This is the third straight year that Michigan has faced an SEC school in a bowl game, after losses to South Carolina and Florida to end the past two seasons. ... Under Saban, Alabama is 6-1 against schools from the Big Ten.