Anything can, and often does, happen in Florida-LSU rivalry 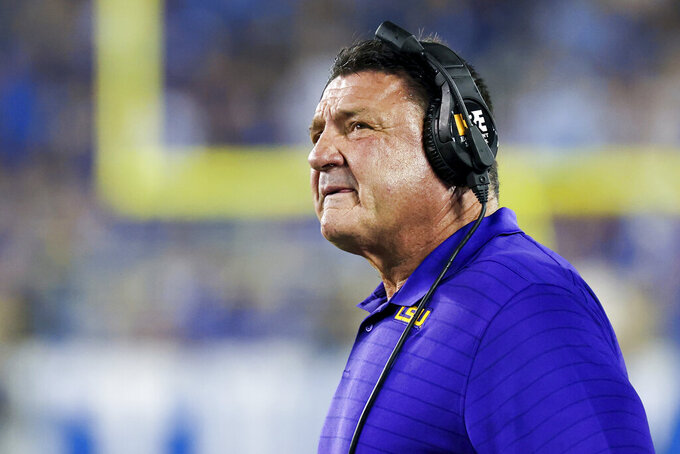 LSU coach Ed Orgeron looks up at the video board during the first half of the tealm's NCAA college football game against Kentucky in Lexington, Ky., Saturday, Oct. 9, 2021. (AP Photo/Michael Clubb)

GAINESVILLE, Fla. (AP) — No one can truly predict what will happen when No. 20 Florida and LSU play Saturday. Anything is possible, everything is on the table and nothing is out of reach. Just look at the recent history of the Southeastern Conference rivalry.

Their matchup last December might have been the most bizarre one in the 50 years since they started playing annually.

Cade York drilled a 57-yard field goal through a dense fog in the final minute to lift the struggling Tigers to a 37-34 upset at No. 6 Florida that few could have seen coming. Gators cornerback Marco Wilson extended the winning drive by picking up tight end Kole Taylor’s cleat after stopping him on a third-down play and inexplicably tossing it several yards in the opposite direction.

Wilson was flagged for unsportsmanlike conduct, a 15-yard penalty that turned a would-be punt into a fresh set of downs. The Tigers moved the chains once more, setting up York’s huge kick.

“I guess that’s going to go down in Gator history,” Florida defensive end Zach Carter said Monday. “They might ask that every year against LSU. Just a crazy play. He got caught up in emotions, excitement, and that happened.

“But we just know this year, heading into this game, those little things like that can’t happen. Can’t do it.”

One little play here or there has defined this heated rivalry, which might no longer be an annual event when Big 12 heavyweights Oklahoma and Texas join the SEC. The league is considering eliminating annual crossover games between East and West divisions to ensure everyone plays each other more often.

If so, Florida-LSU would be one of the league’s biggest losses. After all, Alabama has won 14 in a row against Tennessee, and Georgia is 14-3 in its last 17 against Auburn.

Florida and LSU, meanwhile, have been involved in countless nail-biters, head-scratchers and gut-wrenchers over the last two decades. Six of the last seven meetings have been one-possession games down the stretch, with the lone exception coming in 2019 in Baton Rouge. Even then, the Gators led 28-21 in the third quarter before the Tigers — led by Joe Burrow, Ja’Marr Chase, Justin Jefferson and Clyde Edwards-Helaire — scored the final 21 points.

“When you think Tiger Stadium, that was one of those nights," said LSU kicker Avery Atkins, who remembers the ball vibrating on the tee before his first kickoff. "It’s stuff like that that makes Tiger Stadium great.”

Said Florida coach Dan Mullen: "Obviously it’s a great rivalry. Things that go into it: One, we play every year. Two, it’s two great programs that … we’ve each won two national championships (since 2006). You look at all the games — not all of them, but a lot of them — coming right down to the wire and being these tough battles.

It’s been filled with drama, too.

It got downright testy in 2016 when Hurricane Matthew forced Florida to postpone its home game against LSU on short notice. Negotiations were tense, with neither side willing to budge until the league office stepped in and moved the game to Baton Rouge later that season.

The Gators used a goal-line stand to escape with a 16-10 victory. A year earlier on the same field, LSU scored on a fake field goal to pull off a 35-28 victory.

Of course, that was nothing compared to the 2007 game, when the top-ranked Tigers converted five times on fourth down and scored 14 unanswered points to win 28-24, a victory that helped propel them to the national championship. That was the same game in which Florida quarterback Tim Tebow mocked LSU students following a touchdown because they had gotten his cell phone number days before the game and left all sorts of messages and even death threats.

LSU coach Ed Orgeron has recently faced questions about his future. The Tigers have lost consecutive games and need a victory to avoid falling below .500. They were in a similar spot last year before stunning Florida in the Swamp with a memorable kick through the fog.

Heading into Saturday's matchup, the Tigers are 10 1/2-point underdogs, according to FanDuel Sportsbook. But in this series, anything can — and often does — happen.

“It's going to be a big game for us" center Liam Shanahan said. "Obviously, it's been a tough start to the year for us. None of us wanted to be in this situation, but the only thing that we can do is keep fighting.”