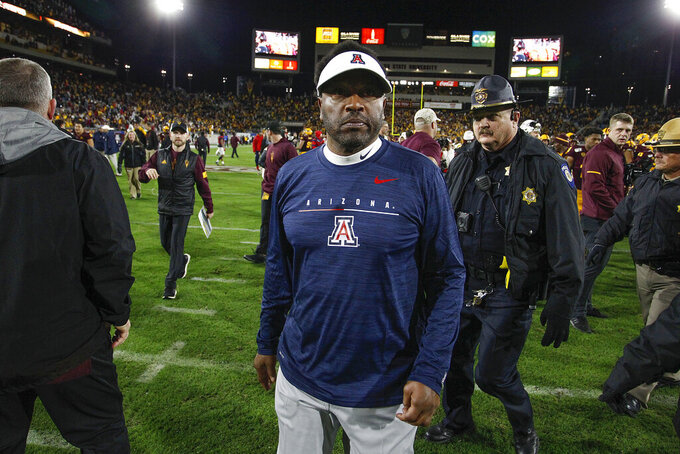 FILE- In this Nov. 30, 2019, file photo, Arizona coach Kevin Sumlin walks off the field after his team's 24-14 loss to Arizona State in an NCAA college football game, Saturday,, in Tempe, Ariz. Sumlin was fired Saturday, Dec. 12, 2020, less than 24 hours after a 70-7 loss to Arizona State that stretched the Wildcats' losing streak to 12 games spanning two seasons. (AP Photo/Darryl Webb, File)

The program went on downward trend in the two years since, the wins dropping each season.

Allowing the most points in a 121-year rivalry turned out to be the last straw.

Arizona fired Sumlin on Saturday, a day after a 70-7 loss to Arizona State extended the Wildcats' losing streak to a record 12 games over two seasons.

“When we hired Kevin three years ago, we had very high hopes for our football program,” Arizona athletic director Dave Heeke said in a statement. “Unfortunately, we simply have not seen the results and upward trajectory in our program that we needed to, and I believe now is the time for a change in leadership. I thank Kevin for his service to the University of Arizona and wish him the very best in the future.”

Heeke said the school will honor the terms of Sumlin's existing contract, including a $7.5 million buyout.

Sumlin entered this year on the hot seat after the Wildcats closed the 2019 season with seven straight losses.

Arizona lost by four to Southern California to open this season, but suffered lopsided setbacks to Washington and UCLA. The Wildcats blew an early 13-point lead to Colorado last week and were run over by the Sun Devils after allowing two touchdowns in the first 56 seconds.

Arizona State scored the most points in Territorial Cup series history — dating to 1899 — to send Arizona to its fifth straight loss this season, with another possible game next week.

The embarrassing loss led numerous former Arizona players, many of whom played under Sumlin, to call for his firing on social media.

Arizona went 9-20 — 6-17 in the Pac-12 — with no bowl appearances under Sumlin and lost all three games to Arizona State. The lopsided Territorial Cup defeat comes two years after the Wildcats blew a 19-point fourth-quarter lead in a 41-40 loss, costing them bowl eligibility.

Sumlin was hired to replace Rich Rodriguez in 2017 and was expected to improve the Wildcats' recruiting after having success at Texas A&M. He didn't have the impact Arizona expected, his best classes coming in 2019 and 2021, when Arizona was ranked No. 56 by the 247Sports composite.

Sumlin made a name for himself in four years at Houston, leading the Cougars to an 11-2 record and a Cotton Bowl win in 2012. He got off to a good start at Texas A&M, leading the Aggies to five straight bowl games.

The Aggies tailed off after winning 20 combined games Sumlin's first two seasons and he was fired after a 5-7 season in 2017.

After showing some early promise, Arizona went on a downward spiral, capped with a record loss to its biggest rival.

“It's what we sign up for, right?" Sumlin said after the Arizona State loss. “It's a tough deal.”