Avalos, Broncos look to get back to top of Mountain West 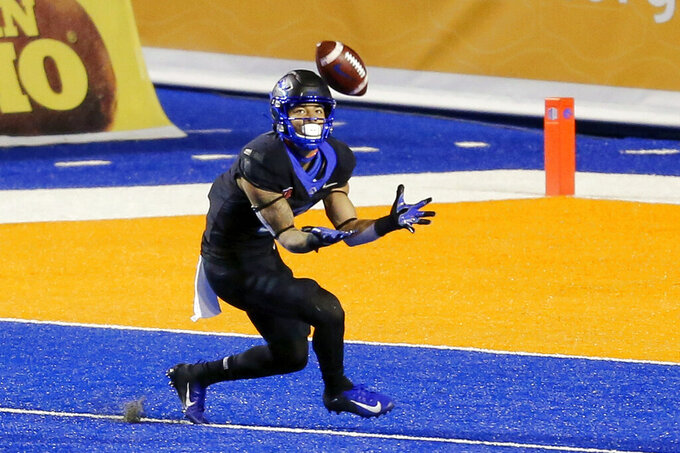 FILE - In this Nov. 6, 2020, file photo, Boise State wide receiver Khalil Shakir (2) reaches for the ball on a 46-yard touchdown reception during the second half in an NCAA college football game against BYU in Boise, Idaho. The Broncos return nine starters on offense and eight on defense. Boise State has two top options at quarterback, a stable of running backs and one of the top wide receivers in the Mountain West in Khalil Shakir. (AP Photo/Steve Conner, File)

SAN DIEGO (AP) — Andy Avalos is back on the blue turf at Boise State, this time as coach of a Broncos team that is primed to regain what it considers its rightful spot at the top of the Mountain West Conference.

The Broncos are the overwhelming pick to win the Mountain Division and have their sights set beyond that after making four straight appearances in the conference championship game, including a loss to the surprise team of 2020, San Jose State.

Avalos, a fan favorite as an all-conference linebacker at Boise State in the early 2000s, was hired away from his job as Oregon’s defensive coordinator after Bryan Harsin became Auburn’s head coach. After his playing days, Avalos served on the staffs of BSU coaches Dirk Koetter and Dan Hawkins, including as defensive coordinator.

Avalos understands the responsibility he’s taken on at his alma mater.

“We’ve been very blessed to have the opportunity to help the program grow in certain areas,” he said.

Avalos will welcome back 19 returning starters, nine on offense and eight on defense, from a team that went 5-0 in regular-season conference games before losing 34-20 to San Jose State in the conference championship game to finish 5-2. It also lost to BYU in the regular season.

Nickelback Kekaula Kaniho said Avalos “is a guy that really cares about us as people before players.”

While Boise State is the overwhelming favorite to win the Mountain Division, San Jose State will have to fight to repeat its magical 2020 season, when it went 6-0 in the regular season before beating the Broncos in the conference title game and then losing 34-13 to Ball State in the Arizona Bowl. The Spartans will be challenged in the West Division by Nevada.

The Broncos clearly are the class of the Mountain Division. For the ninth straight year they have been picked in the preseason poll to win the division, receiving 23 first-place votes. The next-closest team, Wyoming, got just two first-place votes. Air Force, Colorado State, Utah State and New Mexico round out the picks.

Nevada, which returns quarterback Carson Strong, the 2020 Offensive Player of the Year, was picked to win the West Division for the first time, receiving 19 first-place votes to just five for San Jose State. The rest of the predicted order of finish includes San Diego State, Fresno State, Hawaii and UNLV.

Boise State and Nevada tied for 34 in the AP’s preseason Top 25, with seven points apiece.

Boise State will be tested early with nonconference games at UCF in the opener on Sept. 2 and at home against Oklahoma State on Sept. 18. It will also play at BYU on Oct. 9. In a marquee MWC game, the Broncos will host Nevada on Oct. 2.

The West Division title could be decided when Nevada hosts San Jose State on Nov. 6.

For the second straight season, San Diego State will play its home games at an MLS stadium in the Los Angeles suburb of Carson as the new 35,000-seat Aztec Stadium is being completed in Mission Valley. The Aztecs razed aging 70,000-seat Qualcomm Stadium to help expedite construction of Aztec Stadium, which is scheduled to open in September 2022.

Among the teams the Aztecs will host are former league rival Utah of the Pac-12 and a marquee game against Boise State set for 9 a.m. on Nov. 26, the day after Thanksgiving.