The Backyard Brawl is 'where the beast lives' for Pitt, WVU 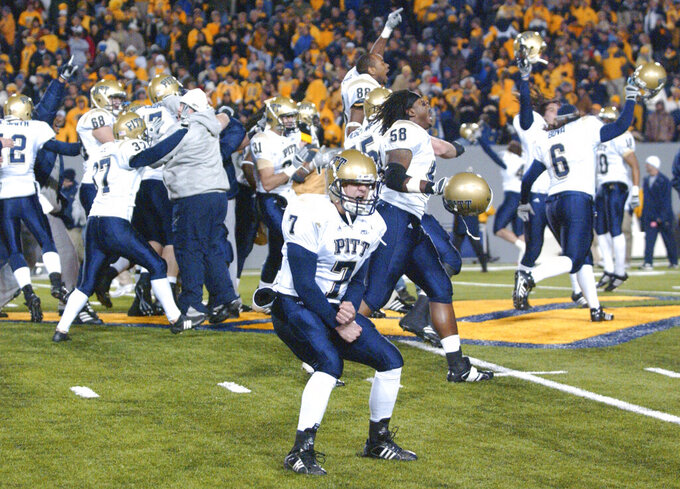 FILE - Pittsburgh's Steve Malinchak (7) and teammates celebrate their 13-9 upset win over No. 2 West Virginia in an NCAA college football game Dec. 1, 2007, in Morgantown, W.Va. The rivalry between the longtime rivals will be renewed following an 11-year hiatus on Thursday, Sept. 1, 2022, when the 17th-ranked Panthers host the Mountaineers. (AP Photo/Jeff Gentner, File)

There's an unofficial title that pops up fairly regularly for the quarterback who helped the Panthers pull off one of college football's greatest upsets of the 21st century.

That’s because across a significant stretch of the Appalachians and western Pennsylvania foothills, “13-9” lives on forever.

Pitt's stunner over West Virginia in 2007 deflated a stadium, derailed a season, and redefined a rivalry, one that will be renewed for the first time in more than 10 years on Thursday night when the 17th-ranked Panthers host the Mountaineers in the return of “The Backyard Brawl.”

Well over a decade removed from that cold December night in Morgantown, West Virginia, the details remain fresh in Bostick's mind.

The way Pitt's bus swayed as West Virginia fans pushed against it as it made its way to Milan-Puskar Stadium. The sound of something heavy — a battery maybe, Bostick thinks — smacking against the bus's frame over and over again. The way running back LeSean McCoy stood up and challenged his teammates to make the impossible possible.

“It was supposed to be a coronation (for West Virginia),” Bostick said. “That team was really, really good.”

It was. Just not on Dec. 1, 2007. Bostick remembers the feeling of disbelief as the Panthers poured onto the field with the Mountaineers' hopes of crashing the BCS title game gone, soon to be followed by head coach Rich Rodriguez, who bolted for Michigan shortly thereafter.

The renewal of the series after both teams left the Big East for more lucrative pastures — Pitt to the Atlantic Coast Conference, West Virginia to the Big 12 — has already produced a rare home sellout for the Panthers. It also required Bostick and others on both sides to spend the run-up serving as history professors of sorts. After all, the players who will participate in the 105th edition of the Brawl were in elementary school the last time Pitt and West Virginia shared the same field, a 21-20 victory by the Mountaineers in 2011.

“I absolutely do feel a responsibility to share," Bostick said. “It's the same responsibility that the seniors had when I was a freshman. I'm also going to encourage them to enjoy it.”

Maybe it's because, as former Pitt running back LeSean McCoy put it, “nothing else matches up" to the Brawl.

“The rivalry is something special,” said McCoy, who ran for 148 yards during the 2007 win and later embarked on a 12-year NFL career.

A feeling embraced by all involved. For years former WVU linebacker Gary Stills tried to impart the significance of the Brawl to his son Dante, who admittedly didn't particularly grasp it while growing up.

He does now. Maybe because the Mountaineers' defensive lineman will find himself thrust into it for the first time on Thursday night.

"I wasn’t, like, locked in, because I’m a kid. I’m just playing around,” Dante Stills said. “I remember just people talking about it growing up as a kid: ‘We don’t like Pitt, we don’t like Pitt.’ But I’m a kid, so I’m like, ‘Why don’t you like Pitt?’ But now, I obviously know.”

At least he thinks he knows. His father isn't so sure his son will understand the Brawl until he experiences it first-hand.

"That Backyard Brawl, that’s where the beast lives,” Gary Stills said. “I’m going to be excited to watch my son play with my number and with the bloodline still going.”

Pitt has been relying on more than folklore to get emotionally ready. Quarterback Kedon Slovis, who will get the start after transferring from USC over the winter, hinted the Panthers have been familiarizing themselves with “Country Roads,” the iconic John Denver song that doubles as West Virginia’s unofficial state anthem.

The anthem has made its way onto a playlist in Pitt's weight room, a psychological ploy designed to offer a little extra motivation at the end of a workout.

This isn't the first time during Pat Narduzzi's now eight-year tenure that the Panthers have revived a dormant series. Pitt and Penn State played annually from 2016-19. Nearly 70,000 crammed into what was then known as Heinz Field for the 2016 meeting, the biggest crowd to attend a Pittsburgh sporting event of any kind in the city's history.

Narduzzi declined to offer specifics on what he's learned about how to prepare for what awaits in front of a packed stadium and a national television audience against essentially a blood rival. Yet he's well aware of the stakes.

“There’s a lot of hatred on their end — but there’s got to be a lot of hate on our end,” he said. “That’s what it comes down to in rivalry games.”

Even if the hate doesn't come from history but from happenstance. Pitt linebacker SirVocea Dennis grew up in upstate New York, far outside the specter of the Brawl and doesn't really know any of the current Mountaineers. That won't matter once the ball is kicked off.

“Once we (put on) our jerseys and that Pitt script on our helmets,” Dennis said, "whoever they say we don’t like, we don’t like.”