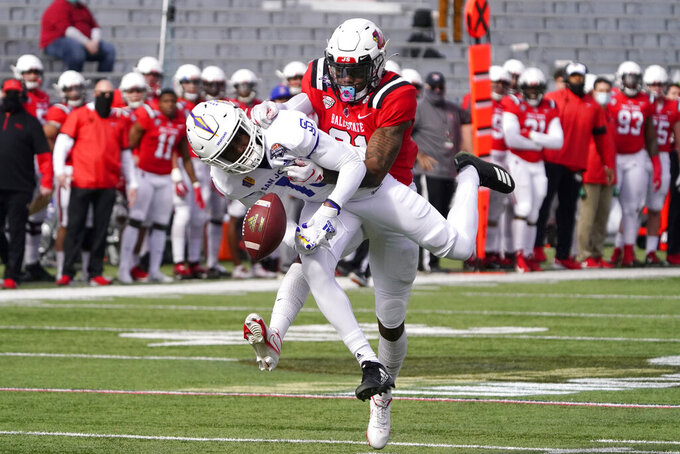 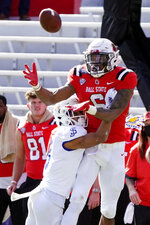 TUCSON, Ariz. (AP) — Tears were shed when Ball State coach Mike Neu told his players this summer that the season had been canceled due to the coronavirus pandemic.

When the Mid-American Conference changed course and decided to start a truncated season in November, the Cardinals were given a second chance. They turned it into the program's first bowl win in 10 tries.

“We knew were granted an opportunity to do something special here,” Ball State safety Bryce Cosby said. “That says a lot about these guys. I can’t even fathom the amount of sacrifice with COVID and everything. We had to do everything a little different and I’m just proud of these guys.”

San Jose State (7-1, No. 22 CFP) had to play without its two coordinators and Mountain West Conference player of the year Cade Hall due to COVID-19 and other issues.

The Cardinals (7-1) took advantage, quick-hitting their way down the field on offense after Phillips' interception for a 27-0 lead in the first quarter.

The Mid-American champions bogged down in the second half but had four interceptions to beat consecutive ranked opponents for the first time; they defeated then-No. 23 Buffalo in the MAC title game.

Quarterback Nick Starkel injured his left knee in the second quarter but later returned wearing a brace. He threw for 268 yards and a touchdown with three interceptions.

“Ball State came out and played hard and they get rewarded for it,” said Starkel. “We felt confident with the guys we had going into this game and I take full responsibility for the interceptions because when I have the ball in my hands, it’s all on me.”

Both teams arrived in the desert on a roll.

The Spartans, who went 1-11 just two years ago, had their best season since going 13-0 in 1939. San Jose State won its first Mountain West championship and had its first winning season since 2012.

The Spartans did it despite having to relocate for training camp and not being able to play on their home field for most of the season.

Ball State lost its opener to Miami of Ohio, then reeled off six consecutive wins to earn its first MAC championship since 1996.

The Cardinals got off to a quick start against the short-handed Spartans.

Phillips scored on his interception when Starkel had a miscommunication with a receiver on the Spartans' opening drive. Ball State kept rolling with its up-tempo offense, scoring on 3-yard runs by Will Jones and Tye Evans. Plitt also scored on a 1-yard, fourth-down run after Nic Jones blocked Elijah Fischer's punt.

“We came out with a purpose,” Neu said.

San Jose State finally got some momentum after Starkel was injured, but backup Nick Nash threw an interception in the end zone. Spartans kicker Matt Mercurio closed the ugly first half with a badly-missed 49-yard field goal attempt.

“The best story of Spartan football this year has been our brotherhood and our family,” Spartans coach Brent Brennan said. “In our process of building that together and for those guys who couldn’t be a part of today, it’s completely devastating and heartbreaking for them and everyone feels that.”

San Jose State's bid for an undefeated season began to unravel before the game started and a shaky first quarter put the Spartans in too big of a hole.

Ball State started fast against the short-handed Spartans and rode it to a historic first bowl win.

He got help from the hard-running duo of Jones and Donny Marcus.

San Jose State: The Spartans received good news earlier this week when Starkel announced he would return for a final college season. San Jose State will have to replace several seniors on offense, but most of the defensive starters are juniors or younger.

Ball State: The Cardinals will have to retool on offense next season after losing eight senior starters, including Plitt. Ball State also will have to replace several seniors on defense.