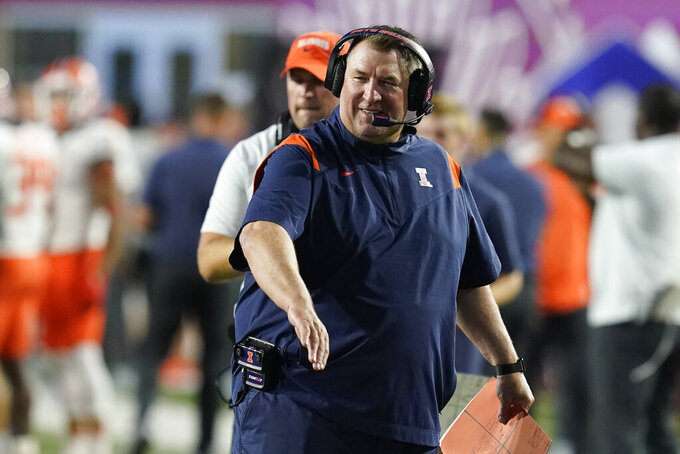 Illinois head coach Bret Bielema smiles after a touchdown during the first half of an NCAA college football game against Indiana, Friday, Sept. 2, 2022, in Bloomington, Ind. (AP Photo/Darron Cummings)

Line: Wisconsin by 7, according to FanDuel Sportsbook

Illinois wants to give coach Bret Bielema a successful return to Camp Randall Stadium. Bielema posted a 68-24 record as Wisconsin’s coach from 2006-12 before leaving for Arkansas. Wisconsin is trying to bounce back after losing 52-21 last week at No. 3 Ohio State.

Illinois running game vs. Wisconsin run defense. Illinois is averaging 209 yards rushing per game to rank 25th in the Bowl Subdivision. Wisconsin allowed the fewest yards per carry in the nation last year but is coming off a performance in which it allowed two Ohio State players – TreVeyon Henderson and Miyan Williams – to rush for over 100 yards.

Wisconsin: RB Braelon Allen has rushed for 497 yards and six touchdowns on 73 carries. He’s coming off a 165-yard performance against Ohio State. Allen rushed for 131 yards in Wisconsin’s 24-0 victory at Illinois last season.

Bielema is the first coach to take an opposing Big Ten team to the school where he won a conference title as a coach since John Pont coached Northwestern at Indiana in 1973. Pont had led Indiana to a share of the 1967 Big Ten crown. … Badgers coach Paul Chryst was an offensive coordinator on Bielema’s Wisconsin staff from 2006-11. … Wisconsin has outscored the Illini by a combined 69-7 the last two seasons after getting upset 24-23 at Illinois in 2019. … Wisconsin has intercepted at least one pass in nine straight games. … Illinois is holding opposing quarterbacks to a 74.2 passer rating. No other FBS team is limiting opponents to such a low passer rating. ... Wisconsin QB Graham Mertz made his first career start against Illinois two years ago and went 20 of 21 with five touchdown passes in a 45-7 victory. Mertz tied the school record for touchdown passes and broke the school record for single-game completion percentage that night. Mertz was 10 of 19 for 100 yards with one interception and no touchdown passes against Illinois last season.