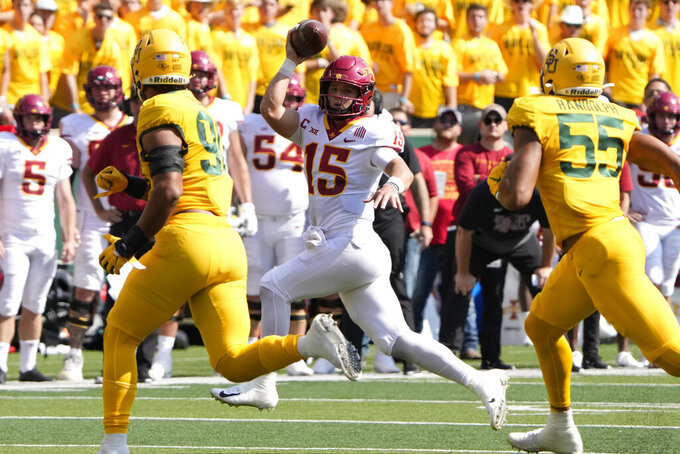 Iowa State quarterback Brock Purdy (15) runs as he looks to pass against Baylor during the first half of an NCAA college football game, Saturday, Sept. 25, 2021, in Waco, Texas. (AP Photo/Jim Cowsert)

There have been boos in Oklahoma and frustration in Iowa. And down in Texas, a gigantic new scoreboard is lighting up like an old pinball machine.

Much of the quarterback play in the Big 12 so far this season is not what anyone expected. The league's best are struggling, while some newcomers have made some big early impressions.

Oklahoma’s Spencer Rattler, the preseason first-team Associated Press All-American, is undefeated with the No. 6 Sooners but is struggling to find last season's form on a floundering offense. He even got booed by the home crowd in last week's 16-13 win over West Virginia.

Oklahoma coach Lincoln Riley was confident Tuesday that Rattler will shake it off.

“We don't pay attention to that stuff ... We are the only expectation and opinion that counts,” Riley said. “Absolutely, we appreciate the fans being in the stands and cheering .... But as far as playing the game, we answer to one standard, and that’s our own.”

Iowa State’s Brock Purdy, second-team All-Big 12 last season behind Rattler, already has two losses, and is 0-1 in league play on a team so loaded with returning talent that some held the Cyclones as a possible playoff team.

And then there's Casey Thompson at Texas, who was on the bench when the season started and now seems unstoppable as a touchdown machine over the last two games.

Rattler and Purdy came into 2021 as the best of the Big 12. They met in last season's conference title game and were expected to do it again. Both have a gunslinger's mentality: Rattler is the latest Heisman Trophy-contending Sooners quarterback, while Purdy has carried the Cyclones program to unprecedented heights.

Rattler's passing numbers aren't bad. He leads the league with 1,017 yards on a 75% completion rate. The Sooners just can't seem to find the end zone of late and he's being measured more for the lack of blowouts than a 4-0 record bolstered by Oklahoma's strong defense the last two weeks.

And those home crowd boos had to sting a bit, even though Rattler did his best to ignore them.

“It doesn’t matter. We’re out here to win a game and they’re in the stands,” Rattler said after the game. “You just got to deal with it. I really don’t know why they were doing it but I mean … .”

Purdy was pulled late in Iowa State's loss to Iowa. His touchdown pass in the final minute rallied the Cyclones at Baylor, but he then fumbled the snap on a 2-point conversion try that failed in a 31-29 loss. The Cyclones began the season ranked No. 7, but are now unranked.

Texas certainly likes what it has found in Thompson, although the more success he has, the more questions arise for first-year coach Steve Sarkisian as to why he didn't start the first two games.

Hudson Card won the training camp battle for No. 1, but was lifted for Thompson late in the second half of a blowout loss at Arkansas.

Thompson has seized his moment: The Longhorns have scored touchdowns on 18 of 22 drives he has started this season and haven't punted in consecutive games for the first time in school history.

Thompson had five touchdown passes and ran for another in last week's 70-35 win over Texas Tech.

“Confident players are dangerous," Sarkisian said. "He got a taste of some success, dove back into it and found some more. He’s found his rhythm.”

Baylor had to find a new quarterback this season after Charlie Brewer transferred to Utah after four seasons in Waco. So far, so good with Gerry Bohanon.

Bohanon was on campus for 3 ½ years before finally winning the starting job two weeks before the season opener. In Baylor’s 4-0 start, he’s passed for 823 yards and seven touchdowns without an interception to help the Bears climb into the rankings for the first time this season at No. 21.

Kansas State came into this season feeling confident that sixth-year senior Skylar Thompson would be leading the Wildcats, only to see him injured three weeks ago. The Wildcats offense has limped along behind Will Howard and running back Deuce Vaughn, but Howard was hurt in last week's loss to Oklahoma State.

Wildcats coach Chris Klieman said Skyler Thompson is “progressing” but is not likely to return this week against Oklahoma. That would mean Jaren Lewis, who started the season No. 3 on the depth chart, could start against the Sooners.

Texas Tech had found its starter in Oregon transfer Tyler Shough, who led the Red Raiders to a 3-0 start. But he suffered a broken collarbone against Texas and will be out at least until November. Henry Colombi finished the game and passed for 324 yards and three touchdowns.