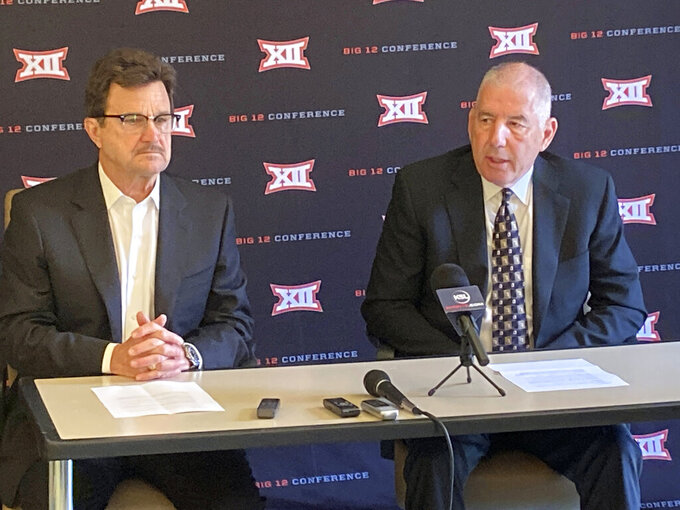 Big 12 commissioner Bob Bowlsby, right, and Texas Tech president Lawrence Schovanec, chairman of the Big 12 board of directors, talk with media at the end of the conference's annual spring meetings, Friday, June 3, 2022, in Irving, Texas. The Big 12 is distributing a record $426 million to its 10 schools for the 2021-22 academic year, and expects to have a new commissioner in place by mid-July. Bowlsby is retiring. (AP Photo/Stephen Hawkins).

IRVING, Texas (AP) — The Big 12 Conference will distribute a record $426 million of revenue to its 10 schools for the 2021-22 school year, a nearly 25% increase over last year and 10% higher than its peak before the pandemic.

“We find ourselves in a very strong position today," Texas Tech president Lawrence Schovanec, chairman of the Big 12 board of directors, said Friday at the end of the spring meetings.

The Power Five league is about to go through a change in its membership, which by next summer could be as many as 14 schools before settling at its original size of 12. It's also getting a new commissioner. Bob Bowlsby, commissioner since 2012, announced his retirement earlier this year and is remaining until his replacement is appointed by mid-July.

Schovanec said the goal is to announce a new commissioner at the league's football media days, which are scheduled July 13-14. Schovanec, one of three university leaders on the executive search committee, provided few details about the process but said things are on track to have a decision by then.

The Big 12 wrapped up its first in-person spring meetings since 2019, which was before the pandemic. That's when the league reported $388 million in revenue for the completed school year. That number was $345 million last June.

Big 12 revenues increased 13 years in a row before the pandemic, which led to the cancellation of the NCAA men's and women's basketball tournaments and all spring sports championships in 2020. A shortened football season followed that fall, with restricted fan access that carried over into basketball season.

After its previous record distribution for the 2018-19 school year, the Big 12 figures initially slipped to $377 million in revenue for 2019-20 because of the pandemic.

“We clearly had some bumps in there, although ... I think we we got all but about three football games played and we got all but about eight basketball games played in 2021,” Bowlsby said. “And so we didn’t take as big a hit as it looked like we could have, when we were sitting in August 2020 and not knowing if we were even going to play football. ... We came through it better than we could have, that’s for sure.”

Revenues are expected to increase again over the next two years, the final years of the league's media rights deal with ESPN and Fox. That is also a time when the league will add new members BYU, Cincinnati, Houston and UCF, likely all next summer, with powerhouse programs Oklahoma and Texas departing for the Southeastern Conference no later than July 1, 2025 — and possibly sooner.

While the Big 12 will lose its only two football national champions, the four additions will have the league spread across eight states and three time zones.

“The financial aspects of this are very important to the health and vitality of our athletic programs. We know that. And that’s why what we do beyond '24-25 is going to be so important,” Schovanec said. “We recognize that the manner in which this inventory will be distributed is going to change. ... We’re all analyzing how we’re going to move forward. And I think a lot of that will depend on the relationships we develop with our new media partners. That will be one of the priorities of the new commissioner once that person is in place.”

The Big 12 is using national firm TurnkeyZRG in the commissioner search. Schovanec said he's been pleased with the progress and quality of the pool of candidates.

“In preparing for the search, what the firm realized was that there was a great alignment among our conference in terms of the vision and the strengths that we need,” he said. “So that pool reflects a diversity of candidates in their professional experience, some from the more traditional athletic administrative roles and then others.”

While not divulging who or how many, Schovanec said a lot of people were interested in the position. He did say the incoming conference members would “have a voice” in the final interview process after finalists are determined.

Notes: The Big 12 extended its agreement to conduct its basketball championships in Kansas City two years through the 2027 tournaments. Beginning in 2024, the women's and men's tournaments will be run consecutively in the same arena, rather than concurrently in different downtown venues as they are now. ... The Big 12 board, made up of school presidents and chancellors, voted to rename its Sportsmanship Award the Bowlsby Award in honor of the outgoing commissioner.