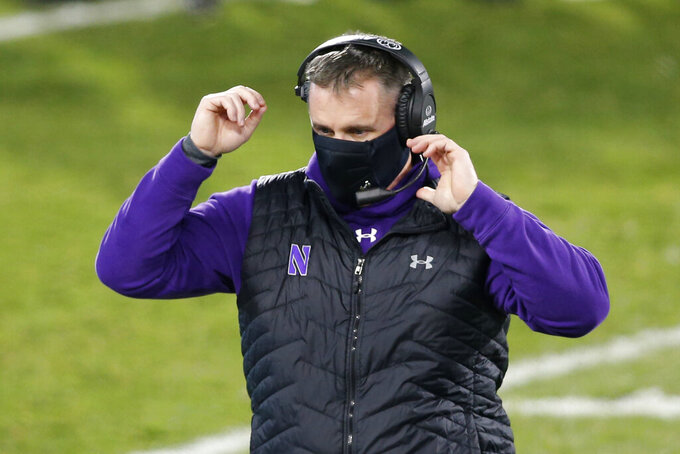 FILE - Northwestern coach Pat Fitzgerald walks on the field during the fourth quarter of the team's NCAA college football game against Michigan State in East Lansing, Mich., in this Saturday, Nov. 28, 2020, file photo. Pat Fitzgerald figures he'll add a few more gray hairs by the time No. 15 Northwestern steps on the field to face No. 3 Ohio State in the Big Ten championship game on Saturday, Dec. 19. Then again, if Northwestern wins? “Not gonna lie to you, it would be a helluva ride home on I-65,” Fitzgerald said. (AP Photo/Al Goldis, File)

Things to watch during the ninth week of play in the Big Ten Conference:

No. 15 Northwestern vs. No. 3 Ohio State, at Indianapolis

The Big Ten championship game is the final step on the Buckeyes' path to the College Football Playoff and is a rematch of the 2018 game, which Ohio State won 45-24. The Buckeyes have won 32 of the last 33 meetings, and some of their players have talked this week about needing to pile on points against the three-touchdown underdog Wildcats to leave no doubt in the minds of the playoff committee. For there to be an upset, the Wildcats must pressure Justin Fields and get production from their ground game.

The significance of this Friday matchup of sub-.500 teams might be lost on folks who don't follow these programs closely, but there are some good storylines. Nebraska is desperately trying to gain traction under third-year coach Scott Frost, and a loss here makes for a long winter in Lincoln. Rutgers is vastly improved under Greg Schiano and looking for its third win in four games. This game gets even more interesting if Rutgers QB Noah Vedral, injured against Maryland last week, is able to play. Vedral transferred from Nebraska after last season. Also, Nebraska tight end Travis Vokolek is a transfer from Rutgers.

Since 2016, Ohio State is 21-3 against ranked opponents and Northwestern is 6-13. ... Penn State goes into its home game against Illinois with 325 total yards in each of its first eight games for the first time since 2013. ... Illinois LB Jake Hansen has been involved in 14 takeaways in the last two seasons, more than any other player in the nation. He has eight forced fumbles recovered by Illinois, three recoveries on fumbles he did not force and three interceptions. ... Michigan State's Payton Thorne heads into his game at Maryland off a 325-yard passing performance against Penn State that set a school record for a quarterback in his first start and freshman single-game record. .... Maryland's Jake Funk is averaging 8.6 yards per carry, highest among FBS running backs.

Minnesota is a 14-point underdog at Wisconsin in the Battle for Paul Bunyan's Axe. Never count out the Gophers. They were without 33 players because of COVID-19 issues and injuries last week yet won 24-17 at Nebraska. Wisconsin's offense is impotent, having scored a total of 20 points over the last three games. This rivalry game is ripe for an upset.

Ohio State quarterback Justin Fields has the ability to take over the championship game with his elite receiving corps. That doesn't mean he will. Northwestern is allowing only 14 points per game and has intercepted 12 passes in seven games. Indiana had the most success against Fields, picking off three passes and sacking him five times Nov. 21. Northwestern, however, does not come close to having the same level of pass rush as the Hoosiers.