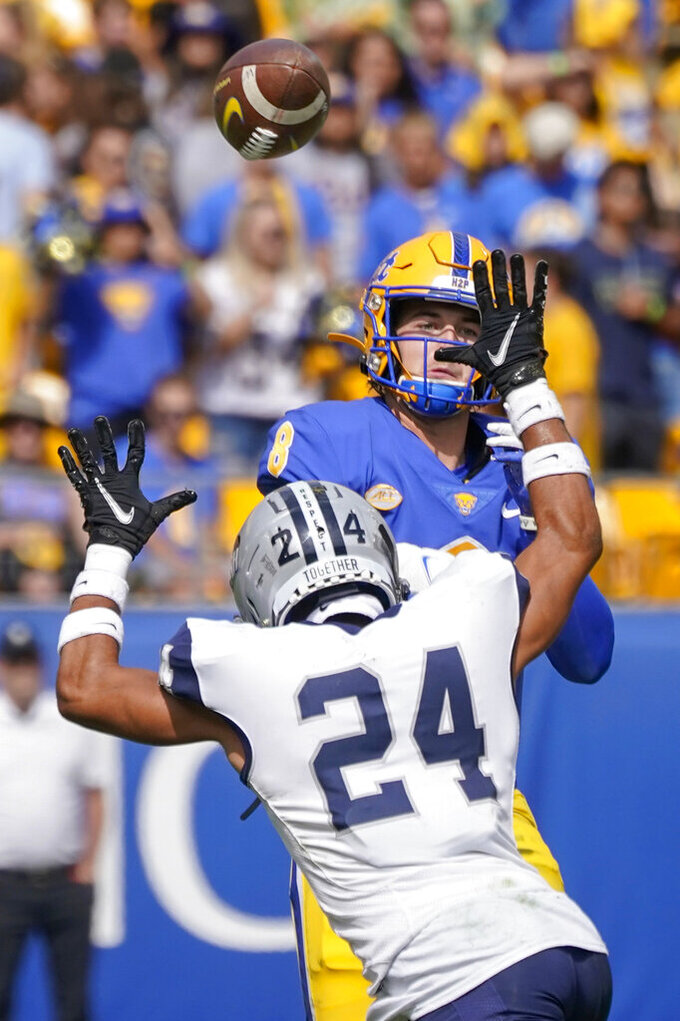 Pittsburgh quarterback Kenny Pickett (8), top, gets off a pass as New Hampshire defensive back Caleb Mead (24) pressures during the first half of an NCAA college football game, Saturday, Sept. 25, 2021, in Pittsburgh. (AP Photo/Keith Srakocic)

—Kenny Pickett, Pittsburgh, threw for 403 yards and accounted for six TDs in a 77-7 win over New Hampshire.

—Christian Anderson, Army, ran for 236 yards and a pair of long first-half touchdowns in a 23-10 victory over Miami of Ohio.

—Sean Clifford, Penn State, passed for four TDs and a career-high 401 yards, leading the No. 6 Nittany Lions to a 38-17 victory over Villanova.

—Westin Elliott, Merrimack, threw for 336 yards and six TDs in a 47-10 nonconference romp over Delaware State.

—Gunnar Holmberg, Duke, tied a school record with four rushing TDs and threw for a fifth as the Blue Devils overcame Kansas for a 52-33 victory.

—Devin Leary, North Carolina State, threw for four TDs, including the winning 22-yard pass to Devin Carter to start the second overtime, in a 27-21 win over ninth-ranked Clemson.

—Rodney Thomas II, Yale, had two interceptions and a returned onside kick for a score in a 23-17 win over Cornell.

—Evan Hull, Northwestern, rushed for 216 yards and a pair of touchdowns, leading Northwestern to a 35-6 win over Ohio.

—Geno Hess, Southeast Missouri, rushed for a career-high 205 yards with three TDs in a 47-14 win over Tennessee State.

—Max Johnson, LSU, passed for 280 yards and four TDs to lead the Tigers to a 28-25 victory over late-rallying Mississippi State.

—Korey Bridey, VMI, rushed for a career-best 177 yards with two touchdowns in a 31-23 win over Wofford.

—Rocky Lombardi, Northern Illinois, rushed for three TDs and threw for another in a 41-14 win over Maine.

—Taulia Tagovailoa, Maryland, threw for 384 yards and three TDs as the Terps remained unbeaten with a 37-16 victory over Kent State.

Clemson’s final pass had barely hit the ground when North Carolina State’s sideline began charging toward the field to celebrate, followed closely by red-clad Wolfpack fans pouring in to join them from all directions.

The Wolfpack’s long run of frustration in these marquee games is over. And the ninth-ranked Tigers’ shot of returning to the College Football Playoff could be, too.

N.C. State forced D.J. Uiagalelei into a fourth-down incompletion to seal a 27-21 win against the Tigers. It’s an outcome that shakes up the Atlantic Coast Conference race while also dealing a huge blow to the Tigers’ playoff hopes in the long term behind yet another woeful offensive performance to start the year.

N.C. State had lost eight straight and 15 of 16 meetings to the Tigers, which included at least one painfully close loss that fueled a bit of Murphy’s Law-level pessimism — locals know it by an expletive-featuring nickname — among Wolfpack fans.

To win more games than any coach in the storied history of Notre Dame football, Brian Kelly has needed to be adaptable.

Chris Tyree returned a kickoff 96 yards for a touchdown and Drew Pyne threw a fourth-quarter touchdown pass in relief of an injured Jack Coan, helping No. 12 Notre Dame pull away from No. 18 Wisconsin 41-13 at Soldier Field.

The Fighting Irish have shown plenty of vulnerabilities as they retooled a team that went to the College Football Playoff last season. But they keep winning.

22_Years since Tennessee State last started 4-0 before this season.

739_Yards of offense by Miami in a 69-0 win over Central Connecticut State, breaking the school record.