Fans are key factor to save 3 kickoff games in Atlanta 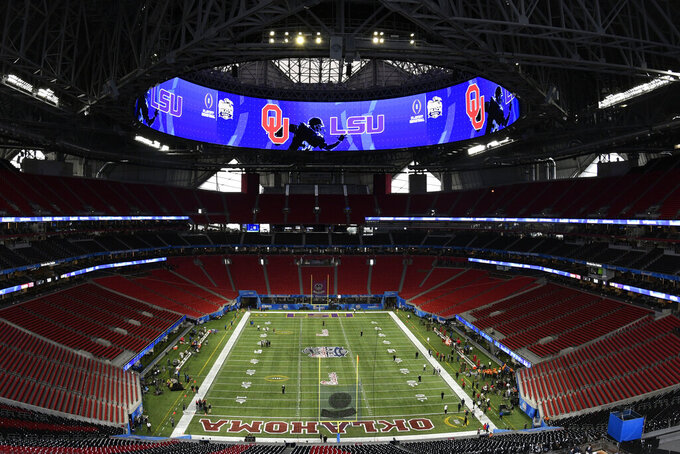 FILE - In this Dec. 28, 2019, file photo, the Mercedes-Benz stadium is shown prior to the Peach Bowl NCAA college football playoff game between LSU and Oklahoma in Atlanta. Chick-fil-A Peach Bowl president Gary Stokan is considering multiple contingency plans for three kickoff games planned in Atlanta, but there is one bottom line: If it's not safe for fans, the three games, Florida State-West Virginia, Georgia-Virginia and North Carolina-Auburn, won't be played at Mercedes-Benz Stadium (AP Photo/Danny Karnik, File)

ATLANTA (AP) — There is no room for negotiation on one key point as Atlanta organizers consider multiple contingency plans for three season-opening games during the coronavirus pandemic: Without fans, the games can't be played in Mercedes-Benz Stadium.

Chick-fil-A Peach Bowl president Gary Stokan, whose organization is making plans for the Florida State-West Virginia, Georgia-Virginia and North Carolina-Auburn kickoff games, says fans must be allowed for the games to be played at the neutral site.

“If there are no fans allowed in the stadium, then we can’t do these games primarily because we only exist in our budget on ticket revenue and sponsor revenues," Stokan told The Associated Press on Thursday. “All the TV monies are negotiated in a conference package. That money all goes to the conference."

The Florida State-West Virginia game is scheduled for Sept. 5, followed by Georgia-Virginia on Sept. 7 and North Carolina-Auburn on Sept. 12.

This is the first year Stokan's committee has planned three kickoff games on the neutral site field. The committee stages the Peach Bowl, part of the College Football Playoff.

Stokan is awaiting decisions from the Southeastern Conference, Atlantic Coast Conference and the Big 12 on plans for the 2020 season. Those plans could be announced by the end of the month.

If the leagues rule out nonconference games, as already announced by the Big Ten and Pac-12, the kickoff games would not be played.

The coronavirus pandemic already has led to the cancellation or postponement of more than 300 Division I games.

The season could be pushed back one month or to the spring.

Stokan says he has assurances that dates will be found at Mercedes-Benz Stadium if the games are rescheduled for later dates.

The NFL's Atlanta Falcons told season ticket holders this week they plan to have 10,000 to 20,000 fans at their home games this season at Mercedes-Benz Stadium. The team plans to leave 50,000 or more seats open to achieve necessary social distancing.

The stadium can be configured for 75,000 fans for college football.

Most professional sports initially returned without fans. NASCAR has allowed some fans in its recent races.

Stokan said it will be more expensive to stage the games “because everybody is going to have to wear a mask.” He said adding expenses while cutting revenue is “a bad way to run a budget."

Stokan said the latest guidance from Georgia Gov. Brian Kemp clears the way for fans to attend with proper social distancing — if the conferences and schools agree.

With no fans, the only option may be to stage the kickoff games on campus sites.

“We’d have to go back to the teams and say we financially can’t do this," Stokan said.