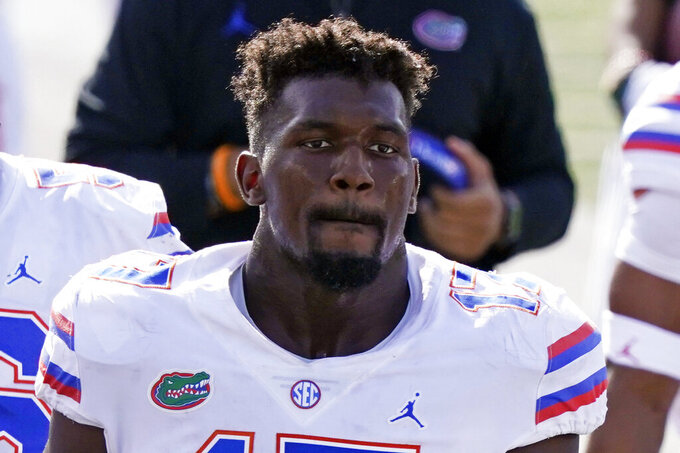 FILE - In this Nov. 21, 2020, file photo, Florida defensive lineman Zachary Carter (17) walks on the sideline in the first half of an NCAA college football game against Vanderbilt in Nashville, Tenn. Carter might have an easier time replicating his season-opening performance than filling ticket requests for No. 13 Florida’s next game. The fifth-year senior and Tampa native is pleading with teammates to help him land enough passes for his homecoming against South Florida on Saturday. (AP Photo/Mark Humphrey, File)

GAINESVILLE, Fla. (AP) — Zach Carter might have an easier time replicating his season-opening performance than filling ticket requests for No. 13 Florida’s next game.

The fifth-year senior and Tampa native is pleading with teammates to help him land enough passes for his homecoming against South Florida (0-1) on Saturday. Carter is trying to satisfy two lists: one from his mom and another for his friends.

“Teammates think I’m crazy asking for so many tickets,” Carter said. “If I can get 40, I’ll take it.”

The 6-foot-4, 285-pound defensive end certainly is a bigger draw after notching a career-high three sacks and a forced fumble in a 35-14 victory over Florida Atlantic on Saturday night. His performance earned him Southeastern Conference’s co-defensive lineman of the week honors.

Although it may have been an eye-opener for some, it was about what Carter envisioned when he decided to stay in school another year, finish his degree and improve his NFL draft stock.

Carter had considered turning pro at times last season and likely would have been a second-day pick. But after ending the year with a three-game losing streak, which culminated with a humbling, 55-20 loss to eighth-ranked Oklahoma in the Cotton Bowl, Carter was longing for more.

So he changed his eating habits to get leaner and faster. He hit the weight room to get stronger. He spent countless hours working with offensive linemen to create more explosion at the snap. And he developed third and fourth moves that can make good pass rushers great.

Carter got to FAU quarterback N’Kosi Perry three times, once in each of the first three quarters before sitting out the fourth. Carter had a sack/fumble in the first, forced an intentional grounding penalty in the second and then capped his career night with one more takedown on the penultimate play of the third.

“Any time you can get three sacks in a game, you’re going to be raising your stock,” Gators defensive coordinator Todd Grantham said. “I don’t care who you play.”

Carter set the edge, was stout against the run and made negative plays just about every time the Owls tried to block him one on one, Grantham said.

“Not only did he make plays and production, but he was a good teammate to other guys with his energy, his leadership, coaching guys,” Grantham added. “There was really no reason to play him (late), but he was working the game and helping some of the guys we’re going to need from a depth standpoint get the coaching they needed.”

The Gators (1-0) expect to benefit all season from Carter’s unexpected return. He’s clearly one of the team leaders and an anchor for a revamped D-line that includes three graduate transfers: Antonio Valentino (Penn State), Daquan Newkirk (Auburn) and Tyrone Truesdell (Auburn).

Carter now has 12½ career sacks and 20½ tackles for loss.

Those numbers pale in comparison to how many tickets he needs for family and friends to see him face the Bulls and play at Raymond James Stadium for the first time.