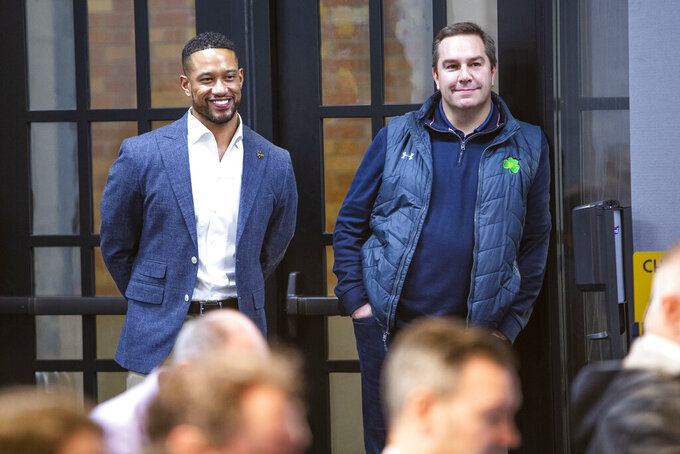 Notre Dame head football coach Marcus Freeman, left, and associate athletic director of football Ron Powlus listen to Notre Dame defensive coordinator Al Golden speak during a media availability Wednesday, Feb. 16, 2022 at Notre Dame Stadium in South Bend, Ind. Of all the new responsibilities Marcus Freeman now has as the new coach at Notre Dame, hiring assistant coaches might have been the most challenging so far. The 10-person staff was officially completed with the announcement of the hiring of Al Golden as defensive coordinator. (Michael Caterina/South Bend Tribune via AP)

Of all the new responsibilities Marcus Freeman now has as the head coach at Notre Dame, hiring assistants might have been the most challenging so far.

“It’s a sigh of relief for me to finally say the full-time staff is complete,” Freeman said Wednesday, calling the process a learning experience. “For me being a first-time head coach, you think you have one vision of how this is going to go and you realize it doesn’t always go as smooth and as easy as you think."

The 10-person staff was officially completed with the announcement of Al Golden as defensive coordinator. The former head coach at Miami has been an assistant coach in the NFL since 2016, including the last two as linebackers coach with the Cincinnati Bengals.

That was a position Freeman didn't think he would have to fill when he was promoted in early December to replace Brian Kelly, who departed for LSU.

The swift elevation for the 36-year-old Freeman was met with much enthusiasm by Notre Dame supporters. in part because it came with word that much of a staff that has helped the Fighting Irish string together five straight double-digit victory seasons also appeared to be staying put.

“Yeah, I was surprised. I didn’t expect it, but ultimately, I really care about Mike Elston. I care about what was best for Mike Elston,” Freeman said.

As a relatively inexperienced coach, Freeman hasn't built up a huge network of coaches to tap into when it came to time to fill positions. New special teams coordinator Brian Mason is someone Freeman has worked with before at Purdue and Cincinnati.

Freeman said he relied heavily on offensive coordinator Tommy Rees' judgment to fill spots on that side of the ball. At 29, the former Notre Dame quarterback is also an inexperienced coach.

“I think when you look at all the changes in the offseason and where we’re at, there’s a new energy. There’s a new excitement,” Rees said. “I know personally, for myself, for our players, for our program, you can definitely feel that the moment you step foot in the building.”

It was Swarbrick who had the connection to Golden. Swarbrick interviewed Golden, then the coach at Temple, during the search that ended with Notre Dame hiring Kelly in 2010.

“That's something that’s different than anywhere I’ve been, where the president of the university (and) the athletic director meets with all candidates and I get his feedback and opinion on everybody we bring in. And so that holds a lot of power," Freeman said.

Freeman, who was defensive coordinator in his one season at Notre Dame before being promoted, said he liked the idea of adding a former head coach to the staff.

Golden will be the Irish's third defensive coordinator in three years. Freeman made it clear that while he wants Golden to build upon what Notre Dame has been doing well defensively, that unit is Golden's to run.

“He has to take this thing over,” Freeman said.

Golden said he hopes to help Freeman make the transition from assistant to head coach, starting with where to stand during practice.

“Like, where do I go?” Golden kidded. “I’m always running a drill and all sudden now I’m overseeing a lot of different things.”

Golden said he enjoyed coaching in the NFL and he wasn't necessarily itching to get back to college. But he was impressed with Freeman just by watching his introductory news conference.

“I told my wife, I said, ‘I share his values,’" Golden said. ”I listened to his press conference, and I said that would be a place that would get me back."