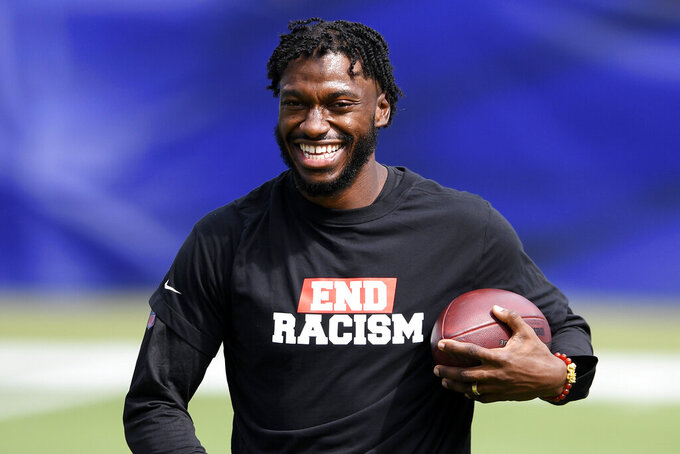 FILE - In this Sept. 13, 2020, file photo, Baltimore Ravens quarterback Robert Griffin III (3) stands on the field before an NFL football game against the Cleveland Browns in Baltimore. The former Heisman Trophy winner and Pro Bowl quarterback has signed a multi-year deal with ESPN to be a college football and NFL analyst. The deal also allows Griffin III to seek a playing opportunity with a team if one arises. (AP Photo/Nick Wass, File)

Robert Griffin III has not totally shut the door on his NFL career but he is taking the next step toward his future beyond the playing field.

The Heisman Trophy winner and former Pro Bowl quarterback has signed a multiyear deal with ESPN to be a college football and NFL analyst. Griffin will be in the booth for a college football game on either ESPN or ABC and will also contribute to ESPN's studio coverage, including during the College Football Playoff and Super Bowl.

The deal allows Griffin to seek a playing opportunity with a team if one arises.

“ESPN has been great through this whole process and understanding that I still want to play,” said Griffin, an NFL veteran and the 2011 Heisman Trophy winner while playing for Baylor. “I still love the game. If that opportunity doesn't come, I'll be giving everything I have to ESPN and this process.”

He had successful auditions with ESPN and Fox this spring and was sought by both networks. Griffin acknowledged the past couple of months have been crazy between deciding his future and keeping an eye on NFL free agency moves.

Lee Fitting, ESPN senior vice president of production, said in a statement that Griffin has been on ESPN's radar for awhile and he will be at one of the biggest games each week.

“I think it’s a fun thing for me to be able to do a little bit of studio and call games. It’s a perfect situation,” Griffin said. “I am continuing to work out, stay ready and prepare for everything that could be coming in the future.”