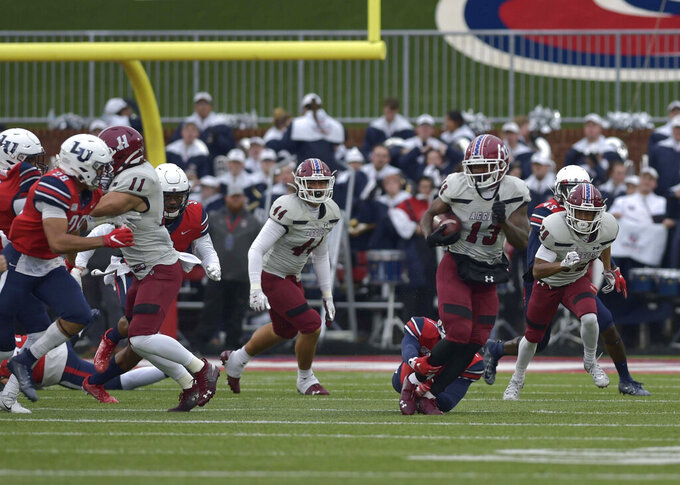 LYNCHBURG, Va. (AP) — Frankie Hickson made it a Senior Day to remember for Liberty, rushing for a career-high 196 yards and a career-best four touchdowns to power the Flames to a 49-28 victory over New Mexico State on Saturday.

Liberty quarterback Stephen Calvert completed 16 of 29 passes for 169 yards and a touchdown, breaking his own school passing record set in 2017 by 29 yards with 3,392. He has thrown 26 touchdown passes and only five interceptions as the Flames (7-5) qualified for an FBS bowl game in their first season of eligibility.

Wide receiver Antonio Gandy-Golden will have to wait until the bowl game to try and set a record for most receiving yards in a season for the Flames. Gandy-Golden came into the game second in the nation with 1,304 yards receiving but was held to four catches and 29 yards. He needs 47 yards to set the Flames’ record.

Liberty beat the Aggies (2-10) for the second time this season after a 20-13 victory in October.

The Flames led 20-14 at halftime and quickly pushed their lead to 29-14 midway through the third quarter on Hickson’s second TD run — a 2-yarder — and Alex Probert’s 21-yard field goal.

Josh Adkins hit Robert Downs III for a 27-yard score to pull the NMSU within 29-21, but Joshua Mack had a 2-yard TD run late in the third quarter and Hickson added a pair of 9-yard TD runs in the fourth quarter as Liberty pulled away. Mack finished with a season-high 118 yards on 16 carries.

Adkins completed 18 of 35 passes for 173 yards and three TDs with an interception for the Aggies, who lost nine straight to open the season before winning back-to-back games. Jason Huntley ran for 105 yards on 17 carries.