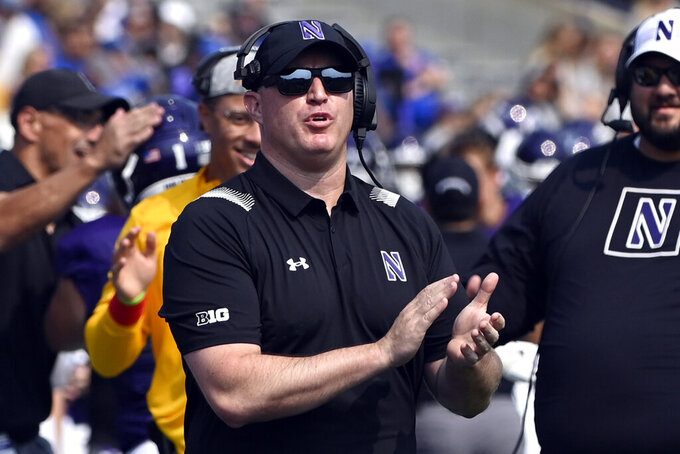 Northwestern head coach Pat Fitzgerald applauds after a touchdown was scored against Indiana State in the first half of an NCAA college football game in Evanston, Ill, Saturday, Sept.11, 2021. (AP Photo/Matt Marton 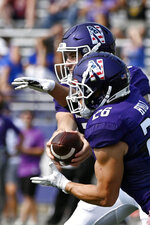 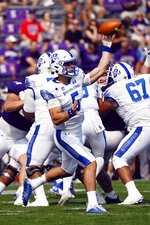 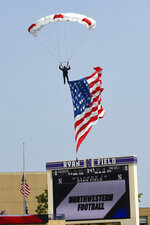 Hull led the way for a Wildcats rushing unit that surpassed last week’s 117 total yards against Michigan State at the half and finished with 209. He ran for 51 yards on the team’s opening drive and capped it with a 3-yard touchdown run.

“When you look at where you’re at as a Big Ten team playing against a FCS team, you have to pound the ball,” Northwestern coach Pat Fitzgerald said. “For the most part, when we targeted things right and executed I thought we did a good job.”

The Wildcats (1-1) never trailed, stopping the Sycamores (1-1) in the first matchup between the two programs.

After throwing for 283 yards against Michigan State, Hunter Johnson finished with 66 yards passing with a touchdown. The senior completed 9 of 16 passes in his second start as the Wildcat starter.

Freshman Anthony Tyus III rushed for 71 yards for Northwestern, which outgained Indiana State 275-169 in total yards and 209-91 in rushing.

“The credit goes to our guys,” Fitzgerald said. “They were the ones who executed cleaner, they looked like they had fun. We’re far from where we need to be and that’s what’s most exciting to me as this group’s coach: We can be so much better and we have to commit to that and I know the guys will.”

Indiana State’s Anthony Thompson passed for 132 yards and a touchdown, completing 21 of 34 passes in his second start for Indiana State after transferring from Northern Illinois.

Matt Sora rushed for 13 yards to lead the Sycamores.

“It’s very motivating for the offense, especially when they give us so many short fields,” Hall said of the team’s strong defense. “When we come into the huddle and we have that momentum, it’s so important to capitalize on it.”

The Wildcats went 92 yards and scored on a Johnson 25-yard pass to Malik Washington to make it 14-0 with a few minutes left in the first quarter.

Brandon Joseph energized Northwestern to start the second half. The returner ran it back 46 yards on a punt that set up a 47-yard field goal. Joseph returned the next punt 50 yards.

Hull added his second touchdown in the middle of the fourth when he scored on a 13-yard run to make it 24-0.

Indiana State got on the board late when Thompson completed a 9-yard pass to Zach Larkin.

“We came in to win the game and we were confident we could,” Indiana State coach Curt Mallory said. “We didn’t flinch. We came here to battle and that’s what this team is about. We’ll continue to stick together.”

Indiana State: The Sycamores kept it down to a two-possession game at the half on the road against a Big Ten opponent but stalled on offense until it was too late.

Northwestern: The Wildcats rebounded after an opening loss to Michigan State by taking care of a FCS opponent.

Indiana State: The Sycamores play at Eastern Kentucky on Saturday.

Northwestern: The Wildcats travel to Duke for a game on Saturday.