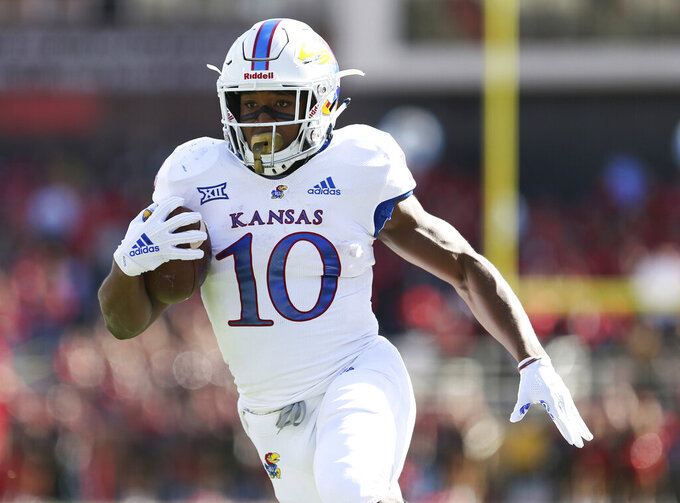 Oklahoma State was coming off three straight losing seasons when he arrived in Stillwater for the 2001 season, a highly regarded coach coming off a stint with the Dallas Cowboys. And in short order, the man in the white cap built Oklahoma State into a perennial bowl team before heading off to LSU.

Now, Miles is back to turn the same trick at Kansas.

As bad as the Cowboys were 18 years ago, the Jayhawks present an even bigger challenge. They haven't had a winning season since 2008, when Mark Mangino was still on the sideline, and they've gone through three other head coaches and an interim coach without finding any success.

In the 10 years before Miles arrived in Stillwater, Oklahoma State was 40-69-3 with one winning season. The past 10 years in Lawrence, Kansas is 23-97 with five wins in their best season.

The perpetually upbeat, uber-confident Miles scoffs at records, though. He dismisses the lackluster numbers that the Jayhawks put up on offense last season, and he couldn't care less how Kansas fared defensively against the air-it-out, pass-happy Big 12. Because all Miles cares about is the raw talent on campus that he can mold into the foundation of a turnaround.

"I think we have a better talent base here at Kansas than I had when I went with Oklahoma State," he said. "We were allowed to recruit a very significant number at Oklahoma State, recruited very well to start. I think that's the same thing here. I think we will recruit well, over time, and I think you will see this Kansas team is much more talented than their record shows."

There is undeniable talent, but the challenge for Miles will be maximizing it.

The Jayhawks' return one of the Big 12's best running back corps, though offensive freshman of the year Pooka Williams will sit out the opener after some legal trouble. Khalil Herbert and Dom Williams give Kansas the kind of versatile depth that could make the run game a cornerstone.

"We have the best running back group in the nation," Herbert said. "There's no drop-off."

In the defensive backfield, senior safety Mike Lee has established himself as one of the league's biggest hitters, and Corione Harris flashed star potential in 11 games as a freshman last season.

"I feel like we're experienced enough to be at the top of the Big 12," Lee said.

There are plenty more holes than plugs, though.

The two-man race heading into camp was between incumbent Carter Stanley and Thomas MacVittie, one of the top junior college transfers in the country. Miles tried luring MacVittie to LSU but lost him to Pitt, only to get a second chance when the pro-style quarterback took his career elsewhere.

"Carter and Thomas come out every day, they work hard and they push each other," veteran offensive lineman Hakeem Adeniji said. "They showed a lot of great flashes in the spring."

The Jayhawks will move from a 4-3 scheme under former coach David Beaty to a 3-4 scheme, but Miles promised it would be different than most systems using three linemen. The idea is to better match up with the flotilla of wide receivers that have become staples of Big 12 offenses.

"It's going to be a fast-paced, in-your-face style," Miles said.

Miles said Williams, his biggest playmaker offensively and potentially special teams, understands that his second chance could his last. The running back was suspended for more than seven months, during which he went through legal proceedings and stood before the university's conduct board.

"He has taken responsibility. He's been remorseful. He's learned from this experience, as has our team," Miles said. "No violence against a woman is OK. I did not make this decision but I stand by it."

The 65-year-old Miles has been out of coaching since 2016, when he was fired by LSU four games into the season. But he dismissed any questions about his age or how long he'll stick around Lawrence — he signed a five-year contract — and talked instead about the enormity of the work ahead.

"I'm looking at the next game," he said. "I'm not really ready to define my success over time."

The Jayhawks open Aug. 31 against Indiana State, then play Coastal Carolina, before a trip to Boston College wraps up non-conference play. Their annual showdown with Kansas State is Nov. 2.