Mendoza has new roles with ESPN, resigns as Mets adviser 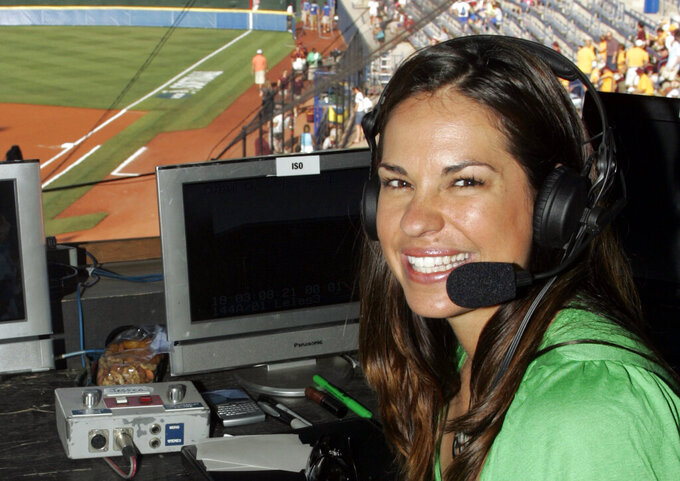 FILE - In this May 29, 2009, file photo, USA softball player Jessica Mendoza poses for a photo in the ESPN broadcast booth at the Women's College World Series in Oklahoma City. The dual roles of former Boston pitcher Pedro Martinez and ex-Olympic softball player Mendoza as team employees and broadcasters have drawn the concern of baseball Commissioner Rob Manfred. (AP Photo/File)

LOS ANGELES (AP) — Jessica Mendoza will no longer be on ESPN's “Sunday Night Baseball” or work for the New York Mets front office after signing a contract extension with the network.

ESPN announced Friday that Mendoza will be an analyst on weekday games as well as making appearances on various network shows, including “SportsCenter” and “Baseball Tonight.”

Mendoza's increased appearances on ESPN have led her to resign as a baseball operations adviser to the Mets and general manager Brodie Van Wagenen. She was hired as a Mets adviser last March.

Mendoza joined ESPN as a softball analyst and college football sideline reporter in 2007. She has been an MLB analyst since 2015 and was part of the “Sunday Night Baseball" booth for four seasons. Her roles with the network and the Mets had been under discussion since the end of last season.

“I’ve always prioritized my growth and these new opportunities will allow me to expand my broadcasting career while challenging me at the same time," Mendoza said in a statement. “Some of the best memories of my career have been with ”Sunday Night Baseball" and I will miss my time with our amazing crew, who have been like family."

Mendoza's dual roles had drawn attention and caused friction. The Los Angeles Dodgers banned her from their clubhouse last year once during the season and once during the postseason because of her position with the Mets. She also drew attention last month for saying on an ESPN show that pitcher Mike Fiers should have gone to Major League Baseball before he told a journalist that the Houston Astros had been using a camera to steal signs.

Commissioner Rob Manfred said during this week's owners meetings that he was not comfortable with Mendoza and former Boston Red Sox pitcher Pedro Martinez being both team employees and broadcasters.

“It's a topic that remains under discussion internally,” he said. "It caused a lot of complications, not just on this particular incident or comments, but in general.”

Van Wagenen said in a statement that the team supported Mendoza's need to devote herself full-time to broadcasting.

“We have such respect and value her baseball insight and know her impact on the game of baseball is just beginning,” he said.

As part of her new role, Mendoza will be the lone analyst on a package of weeknight games as well as being in the booth for ESPN Radio's coverage of the World Series and postseason games. Additionally, Mendoza will be making plenty of studio appearances on “SportsCenter,” “Baseball Tonight” and other ESPN studio shows as well as doing features on “E:60.”

Mendoza, who was inducted into the National Softball Hall of Fame last year, will continue as a lead analyst during ESPN's coverage of the Women's College World Series as well as reporting from the Tokyo Olympics. She was a four-time, first-team All-American at Stanford, and won gold (2004) and silver (2012) medals with the U.S. at the Olympics. She also signed a multi-year extension with ESPN in December 2018.

“We are proud that Jessica, one of our most talented and recognizable commentators, will continue blazing new trails with ESPN for several years to come," said Norby Williamson, ESPN's executive vice president for production.

ESPN is trying to finalize the rest of its MLB coverage plans for this season. Alex Rodriguez and Matt Vasgersian are entering the final year of their ESPN contracts but the only certainty right now is that Rodriguez will be back on “Sunday Night Baseball.”