Miami, USC have work to do as early signing period ends 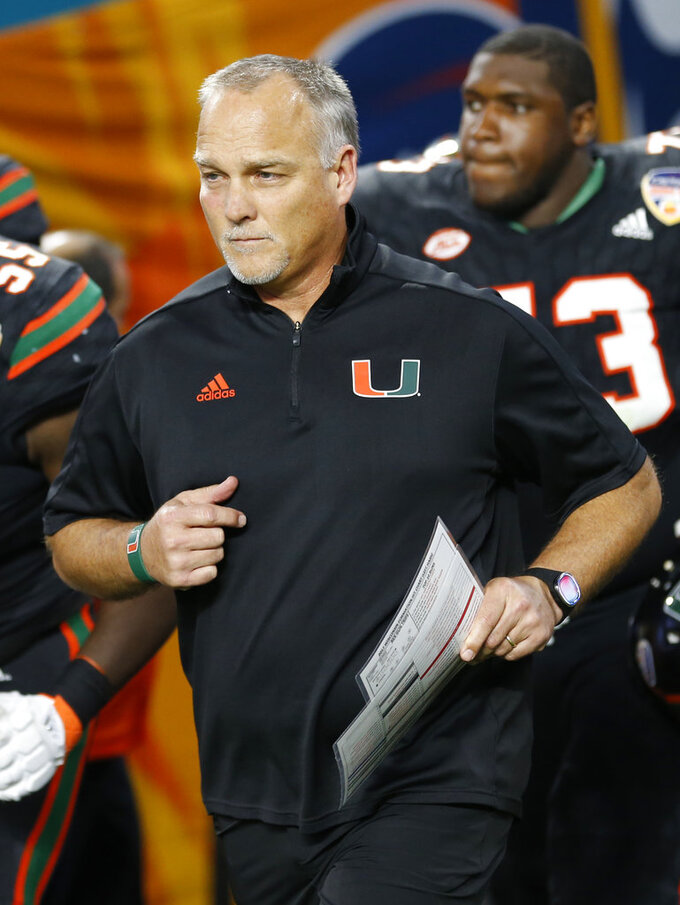 FILE - In this Dec. 30, 2017, file photo, Miami head coach Mark Richt enters the field during the second half of the Orange Bowl NCAA college football game against Wisconsin, in Miami Gardens, Fla. Some traditional recruiting heavyweights have plenty of work to do in the next several weeks to sign the level of talent they usually attract each year. As college football’s early signing period concluded Friday, Southern California was outside the top 20 and Miami wasn’t in the top 30 of the team standings in composite rankings of recruiting sites compiled by 247Sports. (AP Photo/Joe Skipper, File)

Some traditional recruiting heavyweights have plenty of work to do in the next several weeks to sign the level of talent they usually attract.

As college football's early signing period concluded Friday, Southern California was outside the top 20 and Miami wasn't in the top 30 in composite rankings of recruiting sites compiled by 247Sports. That leaves both schools needing to stock up by the Feb. 6 traditional signing date.

"The average star ratings are just not very good at least compared to what we're used to for those programs," Rivals director of recruiting Mike Farrell said.

But the geographic tilt of those signees gives Southern California reason for optimism.

"We're confident (USC will) rise to a certain degree, but in the context of what we expect out of USC — a top-five kind of class — they've still got some work to do to get in that type of conversation," Simmons said. "We might be looking at more of a top-15 class than a top-five class depending on what they're able to accomplish down the stretch."

"If Miami lands those guys, all of a sudden things are looking up," Simmons said. "But it feels like those guys are trending elsewhere right now."

Some notable recruiting angles to watch as the early signing period ends and teams turn to February.

MORE FLIPPING: Some top-100 prospects made last-minute switches. Safety Jordan Battle signed with Alabama after verbally committing to Ohio State. After switching his verbal commitment from Michigan to Alabama this month, safety Daxton Hill ended up signing with Michigan after all. Quarterback Sam Howell signed with North Carolina after being verbally committed to Florida State.

OKLAHOMA RECEIVERS: Oklahoma already has a top-10 class that includes two of the nation's four top receiving prospects according to Rivals in Theo Wease and Trejan Bridges. If the Sooners also sign Haselwood, they'd have three of Rivals' top four receivers.

"If he goes to Oklahoma, it would be on paper the best wide receiver class ever," Farrell said.

SEC SURPRISES: Chad Morris went 2-10 in his debut season as Arkansas' coach, but he earned plenty more victories on the recruiting trail. Arkansas ranks 20th in the 247Sports team standings. While the Razorbacks are still in the bottom half of the SEC, a top-20 position is quite impressive considering their recent struggles on the field.

"Arkansas was probably the biggest surprise of the year with the class they put together coming off a 2-10 season," Farrell said.

Tennessee, which went 5-7, has put together a top-15 class. The Vols signed 17 players on Tuesday and got more good news when running back Eric Gray (171st in the 247Sports Composite) signed Thursday and linebacker Quavaris Crouch (39th) announced Friday he also plans to sign with the Vols.

PLAYERS TO WATCH: Four of the top 10 players in the 247Sports Composite remain uncommitted. Haselwood is the top remaining uncommitted player. McCoy (rated No. 7 overall) is choosing between USC and Texas. Defensive tackle Ishmael Sopsher (No. 9) is considering Alabama and LSU. Offensive tackle Darnell Wright (No. 10) is looking at Tennessee and Alabama.

STOCK RISERS: Because so much of the top seniors already have signed, the remaining uncommitted players could start getting more offers as schools try to fill out their classes.

"With only 20 percent (of prospects) left out there and plenty of programs still with some room available, there are going to be some guys who were otherwise middle-of-the-road prospects who are going to be treated like five-stars in the next couple of weeks," Simmons said.