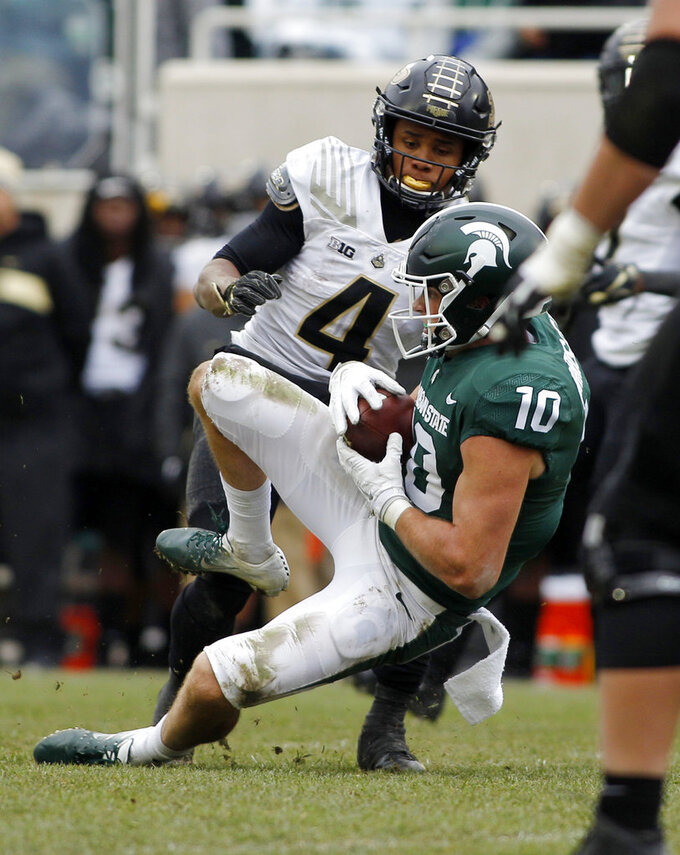 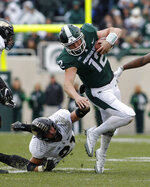 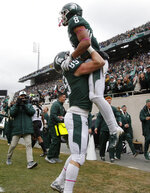 EAST LANSING, Mich. (AP) — Rocky Lombardi made his first start at quarterback for Michigan State, and the Spartans didn't hold back.

Lombardi threw for 318 yards and two touchdowns, and the Spartans halted Purdue's four-game win streak, beating the Boilermakers 23-13 on Saturday. With Brian Lewerke out with a shoulder injury, Lombardi guided the offense, and the redshirt freshman attempted 46 passes.

"Forty-six attempts is a lot," Lombardi said. "I'm happy that I got that many attempts and got to show what I did.

Matt Coghlin kicked three field goals, and the Spartans (5-3, 3-2 Big Ten) held on defensively toward the end. Michigan State's Mike Panasiuk blocked a field goal with 3:42 remaining, and Jalen Nailor broke free for a 48-yard touchdown reception to put the Spartans up 23-13 with 1:58 to play.

David Blough threw for 277 yards for Purdue, but he was intercepted three times, including once while the Boilermakers (4-4, 3-2) were in field goal range in the fourth quarter.

Michigan State has won eight straight games in this series.

"They executed better than us. I thought they played harder than us and I thought they made fewer mistakes," Purdue coach Jeff Brohm said. "It's a good learning experience for our team. That's why we say it's a one-game season. We did not get ready to play this game, come out and do the things necessary in order to win."

Purdue was coming off a 49-20 win over Ohio State, but the Boilermakers missed too many opportunities against the Spartans. On fourth-and-3 from the Michigan State 44 in the final quarter, Blough completed a pass to Rondale Moore, who was tackled short of the line to gain.

Later, Blough threw to Brycen Hopkins near the Michigan State 20, but Hopkins took a hard hit from Tyriq Thompson of the Spartans and lost the ball. Thompson grabbed it before it hit the ground for an interception with 10:02 to play.

Spencer Evans had a chance to tie it with a 41-yard kick, but Panasiuk got a piece of it.

"It was a very winnable game," Blough said. "It was a close game all the way throughout and they were banged up. It feels bad because I didn't play very well and didn't do enough to help my team win."

Lombardi's first touchdown pass came with 56 seconds left in the first half — an 11-yarder to Darrell Stewart. The Spartans led 16-6 before Terry Wright's 1-yard scoring run late in the third brought Purdue within three.

Purdue: The Boilermakers were shut down for much of the first three quarters, but they certainly had their chances late. Their inability to come away with points in the fourth quarter on repeated trips into Michigan State territory made this loss a frustrating one.

Michigan State: The Spartans were coming off an emotional loss to rival Michigan, and their offense had its ups and downs with the backup quarterback in the game. But Michigan State remains a solid defensive team, and the Spartans were able to prevent Moore (11 catches for 74 yards) from breaking free for too many big plays.

"People took notice today," coach Mark Dantonio said. "People all across the country took notice that the Spartans got up and played — against a good football team that just had a huge win last week."

Lombardi's strong outing raised an obvious question: Would the Spartans have been better off going with him in last weekend's 21-7 loss to Michigan?

"We were second-guessing that a week ago today," said Dave Warner, Michigan State's co-offensive coordinator. "Probably put (Lewerke) in a bad situation by playing him without practicing, without going full tilt all week."

Dantonio was noncommittal about the quarterback situation going forward.

"Those decisions can be made at another time," he said. "First thing we've got to do is get (Lewerke) healthy."

In addition to the blocked kick in the fourth quarter, Evans missed a 57-yard kick at the end of the second. The attempt was pushed back to that distance when Purdue was called for a false start.

Coghlin had made a school-record 18 consecutive field goals until he had a kick blocked in the third quarter.

Purdue: The Boilermakers host No. 18 Iowa next Saturday in a game that could have major implications in the Big Ten West race.

Michigan State: The Spartans play at Maryland next weekend.