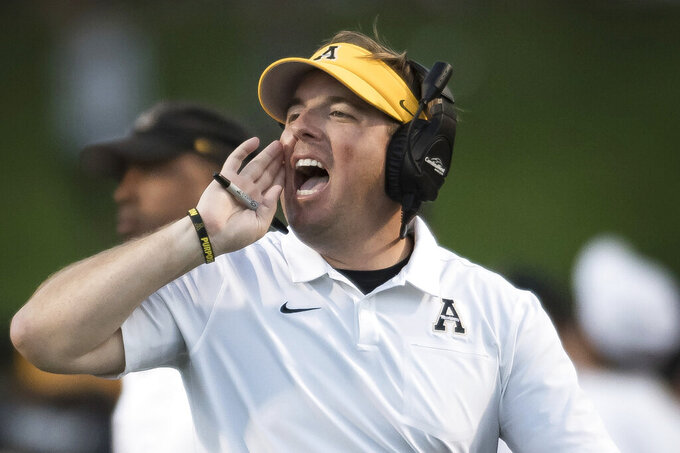 FILE - In this Sept. 28, 2019, file photo, then-Appalachian State head coach Eli Drinkwitz shouts in the second quarter of an NCAA football game against Coastal Carolina, in Boone, N.C. The debut season for Missouri coach Eli Drinkwitz got much more challenging when the Southeastern Conference adjusted its schedules this summer. Missouri’s original cross-division opponents in its SEC schedule were Arkansas and Mississippi State, which both finished below .500 last season. But when the SEC switched to a format in which each team will play 10 conference games, Missouri discovered it also would be hosting Alabama and visiting defending national champion LSU.(Allison Lee Isley/The Winston-Salem Journal via AP, File)

The new coach of the Tigers could have pleaded ignorance when it came to the number of positive results, or the amount of contact tracing that has been done. He could have leaned on HIPPA — the federal Health Insurance Portability and Accountability Act designed in part to protect patient privacy — and declined to address questions from reporters.

He could have maintained the competitive advantage that comes with refusing to disclose such vital information.

Instead, Drinkwitz laid everything on the table.

Seven players have so far been ruled out for Saturday's opener against No. 2 Alabama because of the virus. There were no positives from the most recent round of testing last weekend, though there were still two more tests to go. There also was an issue with tests that came back inconclusive, which kept a few extra players out for a few practices.

“We'll be at 69 scholarship players available for the Alabama contest,” Drinkwitz said.

The Tigers could have used every advantage they can get. They only had a few spring practices to learn Drinkwitz's system before the pandemic put workouts on pause, and when the SEC chose to go with a conference-only slate of games, it meant a debut against the mighty Crimson Tide rather than a lower-tier, non-league foe.

The reason he decided to reveal the information turned out to be quite simple: transparancy.

“This is a public health issue, not a competitive issue,” Drinkwitz explained. “This is not an injury we're trying to keep. People should know what's happening within our football program as it relates to the pandemic. That to me is more important than, you know, whatever competitive advantage it might be to win or lose a football game.”

No standard has been set for how college football programs disclose positive tests, which shouldn't be surprising given the chaotic nature of the entire season. But while several coaches, such as Drinkwitz and second-year Kansas State coach Chris Klieman have vowed to be as open as possible, many others have chosen to keep the information private.

Tennessee coach Jeremy Pruitt, who is trying to build on an eight-win season last year, is no longer discussing test numbers now that his team is in game week. The Volunteers open their SEC-only schedule at South Carolina on Saturday night.

Alabama counterpart Nick Saban is aligned more closely to Drinkwitz and Vanderbilt coach Derek Mason when it comes to disclosing test results. The Crimson Tide were among the first programs to begin testing three times a week — long before the SEC mandated it — and have since used their considerable resources to begin daily testing.

“We don’t really have anybody that would be out for sure for the game,” Saban said. “We may have some injured players who may not recover enough to be able to play in the game. We haven’t really discussed it. I’m sure when we get into game week and we figure out exactly who can and who can’t we’ll kind of let you know.”

Many programs lie somewhere in the middle; they may not volunteer their COVID-19 testing information but they also are not trying to hide anything. One example is Kansas, which confirmed reports of three positive tests ahead of its opening loss to Coastal Carolina, then distributed a list before kickoff of nearly 40 players that did not dress for undisclosed reasons.

Meanwhile, Drinkwitz wants to eliminate any rumors and guesswork when it comes to his Tigers.

“I believe in the value of football and what we're doing and to represent the state of Missouri on Saturday, and let people not focus on the pandemic and compete,” he said. “And I think for me, what went into it was just honesty and the approach that the pandemic overrides competitive advantage.”